A subtle and nuanced exploration of the resurgence of the right in Europe.

Winter Solstice is a nuanced and intelligent exploration of the re-emergence of the right in European politics over the past decade and offers an interesting explanation, one to which many are now coming to accept.

The play takes place on Christmas Eve in a liberal, upper-middle class European home, a familiar environment for the Orange Tree audience. Albert, a historian, author and academic, and his wife Battina, a somewhat underappreciated filmmaker, are arguing over who ought to greet Battina’s mother upon her arrival. The ordinary Christmas-related family tension is augmented, however, by the arrival of a gentleman Corinna, Battina’s mother, has invited to stay, having met him only that afternoon. Albert immediately senses something about Rudolph that makes him uneasy, but does not work out what this is until later in the evening.

As the evening progresses, Rudolph, played with captivating gentility and charm by Nicholas Le Prevost, espouses views that director Ramin Gray describes as ‘very seductive and easy to agree with’. Corinna, played with wonderful flirtatiousness by Kate Fahy, is entirely taken in, blind-sighted by the unexpected male attention she is receiving and Battina, with other exploits on her mind, fails to notice the sinister nature of Rudolph’s assertions.

The depth of symbolism in Roland Schimmelpfennig’s play, translated adeptly by David Tushingham, is unprecedented. Leaving the theatre, the audience has plenty to chew on and I myself found extensive layers of meaning hidden whilst thinking over the play on my journey home. It is obvious that Rudolph represents the growth of right-wing sentiment, but perhaps more interesting is the response he receives from Albert, Schimmelpfennig’s metaphor for the liberal, educated left. Throughout the evening’s activities, including dinner and several piano recitals from Rudolph, whereupon he is frank about the nationalities of each piece’s composer, Albert wants to say something, but he is not sure how to or what is it he would like to say. His natural warmth and exasperation are created beautifully by Dominic Rowan, giving us real empathy with the central character. Held back by the social norms of respect for elders and the expectation that he be polite to guests, we see the controversial comments espoused by the right unchallenged by the left. This seems to be the playwright’s central assertion and is one with growing weight. After the tumultuous year for global politics that was 2016, there is certainly an emerging commentary suggesting that the lack of real debate between right and left due to political correctness and left-wing snobbery has given rise to the right’s resurgence, giving this play particular resonance at this time.

An additional metaphor, albeit a subtle one, is Albert’s desperate self-medication as the night progresses. He takes white, blue and green pills simultaneously but we never find out what they are for; it is unclear that Albert himself has any idea either. Here Schimmelpfennig seems to suggest that there is internal illness in the left which it is trying to remedy, but being unable to identify the problem, the medication is inhibiting it from being able to provide any substantial opposition to the healthy, although aged, body of the right. Rudolph’s age also connotes the demographic of many Leave voters, adding to the resonance of the play.

Both Albert and Battina’s affairs, Albert’s with a young woman at his publishers and Battina with Albert’s close friend, and guest that evening, Konrad, are discovered and in many ways represent distractions from the evening’s events. Again, there is subtlety but the implication shines through: the left are too distracted by their own desire for something more, whatever this may be, to face up to the main issue before them. 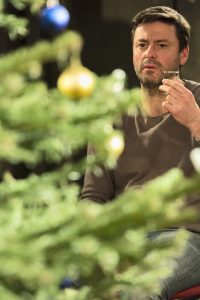 Although the content of this play is itself a minefield of interesting issues, Gray’s direction and Lizzie Clachan’s design are incredible tools in facilitating the audience’s engagement with them. Written more like a film script than a play, as Gray acknowledges, the characters narrate the action throughout. The decision to stage the piece in a rehearsal room, equipped with pens, jugs of water, paper, mandatory boxes of chocolate and bags of satsumas, is inspired. We get the impression that we as an audience are discovering the story with the actors. Giving each other stage directions, the actors respond and learn as we do, creating a beautiful take on immersion in a play and also providing a relaxed and inclusive environment. Partly through this, the audience are lured into joining the characters on their journey into Rudolph’s statements.

Furthermore, as Gray rightly notes, the narration of the action helps the audience to imagine a lot of the action for themselves. He says ‘the fact that your participation is being elicited to create the setting gives you a stake in it which means it is harder to push away from you.’ This effect was clear and worked well, although in the final scene of the play, realistic props are used which slightly dampens the impact of the piece: the audience are being asked to imagine and invest but this role is then taken away from them.

Both the sound and lighting designs compliment Clachan’s set well, offering us resources to use in our imagining of the setting, and providing a realism where necessary. Stage Management also deserve huge commendation for their precision in the placement of props, without which the comic timing and playfulness of the piece would certainly have been lost.

This is a production that I am sure will sit with its audience for some time and its gentle exploration of the return of the right, without ever explicitly mentioning it, will not be lost on the Orange Tree audience. For anyone left politically apathetic by the past year’s events, it’s an absolute must see.

Winter Solstice, co-produced with the Actor’s Touring Company, runs at The Orange Tree Theatre until 11th February at 7:30pm Monday-Saturday, with matinees at 2:30pm on Thursdays and Saturdays. Tickets can be bought on 020 8940 3633 or online at https://www.orangetreetheatre.co.uk/whats-on/winter-solstice/ticket-info.