Review of: Us/Them by BRONKS Theatre

A fresh, funny, and fantastic examination of how we create a narrative out of national trauma. A huge hit at the 2016 Edinburgh Fringe - make sure you catch it during its limited National Theatre run.

The plucky Dorfman theatre continues to best its big brother next door with the latest in its limited-run season – Us/Them, from Brussels-based BRONKS Theatre. Telling the story of the 2004 Beslan school siege from the perspective of two children, Us/Them scooped rave reviews and a Fringe First Award at its Summerhall run at Edinburgh last year. According to The List, it was the third highest-rated show of the festival. Transplanted to the Dorfman until the 18th February, the show has considerable hype to live up to.

I’m not convinced that this hype is helpful for this show, or that the Dorfman is necessarily the most appropriate venue for it. I am grateful that such fresh, funny work has been given the exposure of being programmed at this presitigious space. Us/Them is an achievement – but crucially, it is not an achievement on a grand scale. This is a story told with smallness – and told on the Dorfman stage, the architecture and reputation of the space threatens to dwarf it. If this seems a petty criticism of the production, I apologise – but I believe that there is an interplay between audience expectation and experience, and that choice of venue cannot help but affect that.

This is worth considering because Us/Them resists the easy drama of grand narratives. Whilst relating the facts of the school siege, our two storytellers dogmatically divert these facts from turning to tragedy. Gytha Parmentier and Roman Van Houtven turn the theatre into a playground – winding its walls with string that criss-crosses the stage, and sketching the school in chalk. Their physical chemistry and sense of play is infectious – in fact, telling the story becomes a series of games and competitions to take control of the narrative. Parmentier and Van Houtven are mesmeric performers, with utter complicity with their audience – although occasionally their squabbling and physical clowning can feel repetitive. The naivety of their shared and obsessive objectivity (one sequence sees Van Houten search for a solution for the hostage situation by sketching algebra in chalk – having to start again as Parmentier updates him on the falling number of surviving hostages), however, exposes how facile our efforts to construct a coherent, emotional response to national trauma can be. 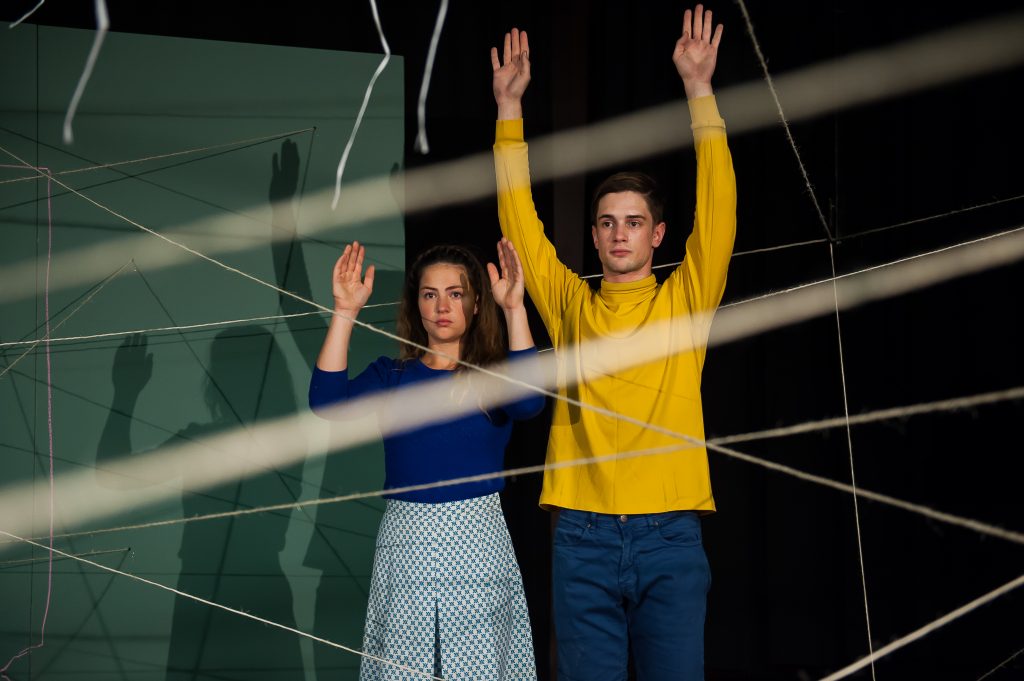 Us/Them left me itching to find out more about its subject beyond the fractured impression left by the children – oddly specific in some areas, utterly enigmatic in others. But as soon as I begun to slip into my customary Google-surfing surface research, it dawned on me that this wasn’t the point. Sometimes, the bigger picture only abstracts our perception of atrocities. We can be deafened by details.

BRONKS create theatre for young audiences, but judging from my experience I doubt many children will amongst the audience for Us/Them at the Dorfman theatre at 8pm. Instead of theatre for children, this seemed to me to be theatre about children – about how children occupy our societal consciousness, and about the narrative we create out of tragedies when children are involved. In asking an adult audience  to map an imagined childhood onto adult performers, Us/Them forced us to perform our own imaginative act of emotional prejudice. It asks us what makes the unimaginable unimaginable. It is a joyful surprise, spoilt slightly by its space.

Us/Them runs until 18 February. You can buy tickets here.