Review of: The Twentieth Century Way

At its UK premiere, The Twentieth Century Way is bursting with dramatic energy and powerful storytelling

A nervous actor rehearsing his lines for an audition. This is what the audience is greeted by as they go down the stairs of the small but atmospheric Jermyn Street Theatre. But the actor, Fraser Wall, shouldn’t really be worried: together with his theatrical partner, James Sindall, manages to give life to a dense, intense, and compelling play.

The kernel of The Twentieth Century Way is, in the words of its author Tom Jacobson, a “forcibly buried complexity of the past”, namely gay clandestine liaisons, as they were considered at the beginning of the 20th century. Set in California in 1914, the play portrays the vicissitudes of two ‘vice specialists’, who use their theatrical abilities to unveil the ‘depravation’ of the most unsuspected members of society. Sneaking into private clubs and bathhouses, the two actors aim at catching gay men red-handed, and subsequently arresting them. Throughout the two-man tragi-comedy, Wall and Sindall unfold the manifold stories and (deceitful) relationships of gay couples, at a time when homosexual sex was considered illegal and prosecuted. 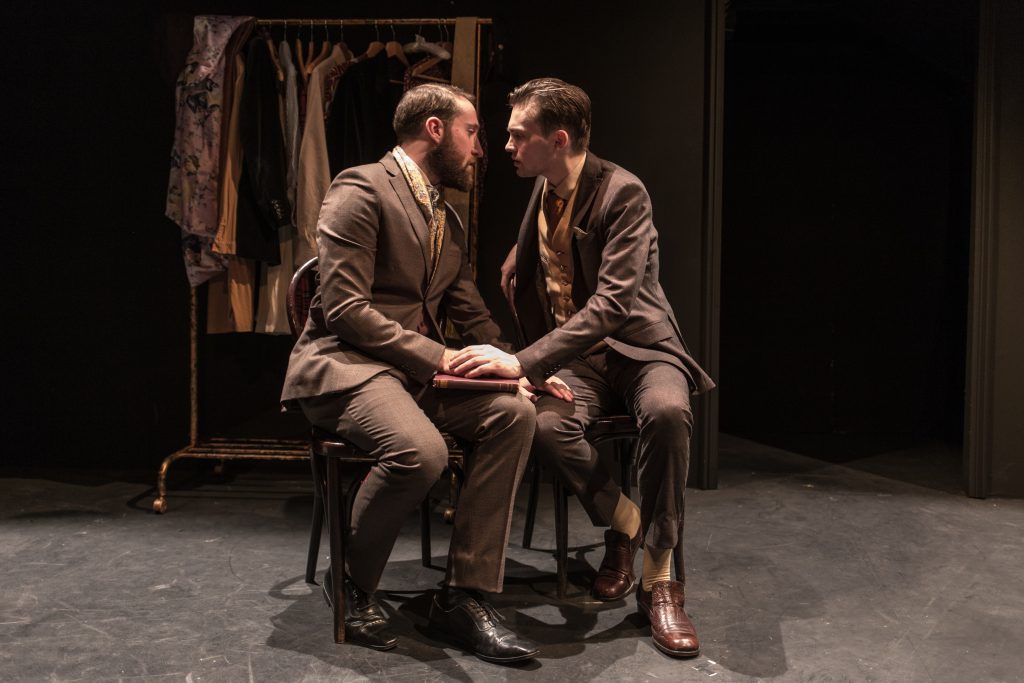 However, to state that this play is merely a chapter in the history of gay rights would be grossly reductive. What I thought the play is mostly imbued with is a sense of meta-theatre, a reflection on acting on stage as much as in real life. Particularly fascinating is the layering of ‘truths’ the play intelligently stacks one on top of another: Wall and Sindall are actors, cop and reporter, German man and priest, a whole bunch of men in drag, lawyer and defendant – the only things that remains constant is their mutability. At times, it is challenging to recap who is who, and who is playing who. It leaves one to wonder what of all this is true, and whether there is any such thing as ‘true’ at all. The script is meta-theatrical in a persistent and almost know-it- all way. Aside from occasional breaks of the fourth walls, the lines are jam-packed with quotes about acting and truth (or ‘naked truth’), living and loving, performing and pretending (‘To act is to take action’, ‘Every relationship is a masquerade’, to cite only a couple). But in spite of the learned tones, there is still plenty of material for the audience to reflect upon and multiple epistemological and philosophical implications to pull out by themselves.

The acting is also cleverly and subtly contrived. Throughout the play, the characters discuss different acting methods: Brown’s (Stanislavski-like) system, consisting in becoming one’s characters, colouring it real emotions, and Warren’s (more Brechtian) method, exclusively based on showing one’s role through gestures, poses, and a façade of pretension. This is also the way Wall and Sindall have chosen to render their respective characters, the former driven and credible, the latter more blatantly, but still exquisitely impersonating from without. Such a directing choice is both clever in itself (and therefore merit to director Marylynne Anderson-Cooper) and brilliantly executed by both performers.

At its UK premiere, The Twentieth Century Way is bursting with dramatic energy and powerful storytelling. It an articulate journey exploring the universe of love, morality, secrecy, and relationships, speaking of history while raising questions relevant to today.

The Twentieth Century Way is running at Jermyn Street Theatre till 28 th January at 19:30 Monday to Saturday, and at 15:30 on Saturday. You can book your tickets from