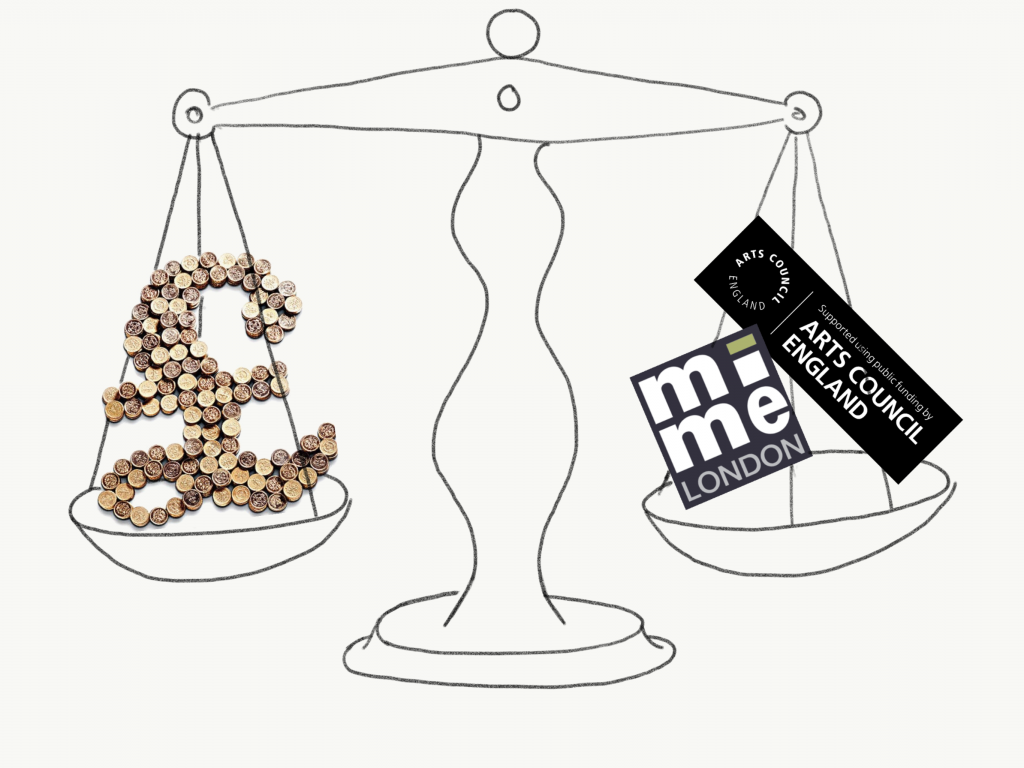 Tonight I’m thinking of going to see the Oscar tipped, star studded, international sensation La La Land, in the beautiful Covent Garden Odeon Cinema on Shaftsbury Avenue in the heart of Theatre Land. For the privilege of watching one of the most hyped films of 2017 so far, I will be charged £8 for a student ticket, with no booking fees for buying my ticket online.

Yesterday I went to see Marée Basse at the Barbican as part of the London International Mime Festival. For the privilege of seeing two obscure French circus performers in the small pit theatre, I would have paid £18, with a compulsory £3 online booking fee (it would have been a £4 booking fee over the phone). £21 in total for taking a punt on a performance I’d never heard of. Fortunately I love physical theatre, but even so, had I not been reviewing I’m not sure I could have justified the cost.

The ticket prices for this years Mime Festival are eye watering. The standard entry is £18 full price and £16 concession – on top of which each venue is adding its own booking fees. There are several issues here. The first is a purely legal one, the Mime Festival website only advertises the base price and fails to mention to existence of additional fees*. However as the Advertising Standards Authority ruled in 2013:

“where a price claim appears for the first time it should be immediately and clearly qualified with a reference to the existence, and amount, of the booking fee. This can be done, for example, by stating “plus booking fee for phone/web bookings*” and linking an asterisk to information that includes the amount.” (source: Code of Advertising Practice) 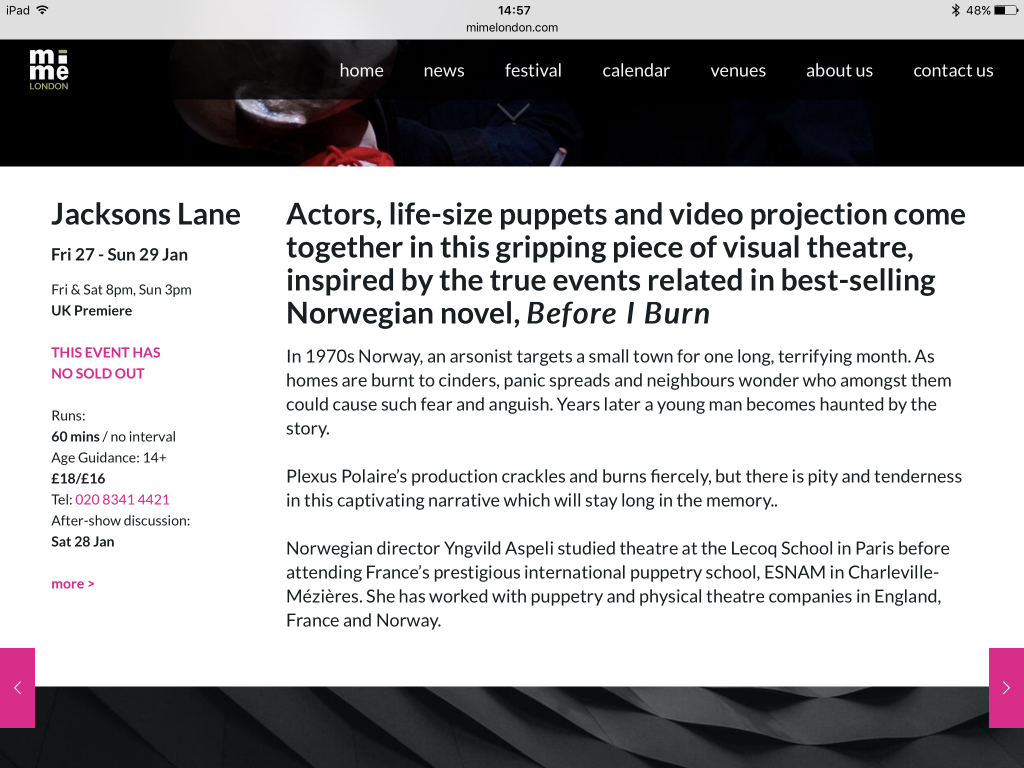 Screen shot of festival listing at time of publication.

Clearly that isn’t the case here, when a price claim appears for first time on a show listing it fails to mention any booking fees or link to the break down of the fees included in the small print on each of the venue pages. I’m sure the Mime Festival aren’t deliberately misleading people, but judging from the annoyance of my companion last night who got caught by an unexpected £3 booking fee, that’s exactly what they’re doing, and therefore risk being found in breach of the Advertising Standards Authority code of practice.

But leaving aside the legality, there is a question of morality. How can a festival that is publicly funded through Arts Council England and the European Union, justify charging a £16 ‘concessionary’ ticket? How on earth could someone who was unwaged afford to spend £16 on a theatre ticket?  Yet, even forgetting about the unwaged, a standard ticket at £18 + fees is surely a barrier to entry for all but the most affluent. Theatre is increasingly looking like a marginalised pastime for the wealthy and ticket prices like these can only serve as evidence of that. On one level, if this was a purely commercial festival there wouldn’t be an issue with that. Shows are selling out, there are clearly enough affluent people to fill the seats available. But as a publicly funded National Portfolio Organisation who’s aim is to ‘promote and celebrate contemporary visual theatre’, excluding such a large number of people from that celebration on financial grounds could lead many to question whether this is an appropriate use of public funds.

But perhaps even more importantly than both of these objections, there is a very practical question about the future of theatre. As I look around theatre audiences, at the sea of greying hair and white faces, I worry. In fairness this is a problem in many theatres, not just the Mime Festival. If the only people who can afford to attend are affluent, white and middle aged, what happens next? If the next generation of theatre goers have the choice between a guaranteed hit movie, in the very centre of London for £8 a ticket, why would they choose to take a punt on a show they’ve never heard of in the Barbican for £21? This is obviously a very real problem for the Mime Festival who only managed to attract 5% of their audience from the 18-23 bracket in 2016.

The place of theatre at the heart of British culture is still central, but I worry how long that can go on for when even publicly funded festivals are allowed to be so far out of the reach of most people. The Mime Festival is undoubtably one of the jewels in the crown of London’s theatrical calendar, and it’s only right that it should be supported by Arts Council England, but that public support should be conditional on the events actually being accessible to the majority of the public.

*ED: We are very pleased to announce that since bringing it to their attention LIMF have updated their website to display booking frees in line with the Advertising Standards Authority code of practice.

LIMF have been in contact to provide further information about their ticketing and demographics. Where appropriate the article has been edited to reflect this. LIMF provided the following statistics about their 2016 audience:

Over half our audience identify as non-British.

We have asked LIMF to provide figures for the BAME and socio-economic breakdown of their audiences, the two main areas highlighted in the Op-ed, we are waiting for their reply.

LIMF were keen to stress that ticket prices are set by the festival’s partner venues not by LIMF directly. LIMF did not comment on whether they would be seeking more equitable ticket pricing from their partner venues moving forwards.

We have offered to publish a full response from LIMF if they would like to provide one.