Review of: The Trackers Of Oxyrhyncus at the Finborough Theatre

Trackers of Oxyrhyncus trails clouds of legend for theatre-makers of a certain vintage. The number of people who remember baggy, shaggy dangle-phallused monsters capering and stamping and swearing on the National stage may well exceed the number of seats actually sold. Oddly enough, since that run in 1989/90, it has almost disappeared.  In that sense it is a prime target in Neil McPherson’s long and happy succession of re-discovered seminal plays at the Finborough

It  starts with the discovery in an Egyptian midden of a tiny fragment of a satyr play by Sophocles , in which cattle belonging to Apollo were stolen and, to recover them, he chose a herd of drunken, randy, cowardly satyrs, who failed in their commission but did bring back a baby who turned out to be the god Hermes. Lest we forget, Hermes was not only the ‘messenger of the gods’ he was also popularly the father of Priapus and Pan, and  the messenger of man TO the gods, and a protector of poets, jokers, liars, cheats, thieves and commerce.

In Harrison’s vivid and dangerous imagination, the infant Hermes, still cacking his nappy, is found playing prodigiously on a prototype lyre. This is snatched away by Apollo, outraged that art can come from so soiled a source, and Art is whisked away out of the reach of base mortals. Into this Harrison weaves another narrative; the goddess Athena has thrown away her flute, because her face bulges when she blows it. The satyr Marsyas finds it, has the temerity to play it well, and is skinned alive as a punishment. This is what happens when ‘Your Caliban/Outplays your Prospero’. Almost worse: his torn skin becomes the first vellum, on which dull, dead writing will outlive the works of genius rotting away on old-fashioned, green, papyrus.

Harrison’s argument is that self-appointed elites have appropriated and smothered art they don’t really understand.  And he adds this: that the lowly (Harrison refers repeatedly to refugees, homeless, petitioners) have been so persuaded that art is above them (and that what entertains them can’t be Art) that they/we  have come to collude in our/ their own philistinisation –  ‘There’ll be plinketty-plonk behind every damn’ tree’  – and retreated into despair ‘I’ve found, to be honest/ I exist better pissed’.

Having taught us just enough Greek to remind us of our own ignorance, and then capered, outraged and deafened us with their stamping hooves, the satyrs re-appear translated to the concrete of the South Bank as very modern hooligans savagely battering a similarly translated Silenus for aspiring to express. It feels as though it should be bleak and wild. 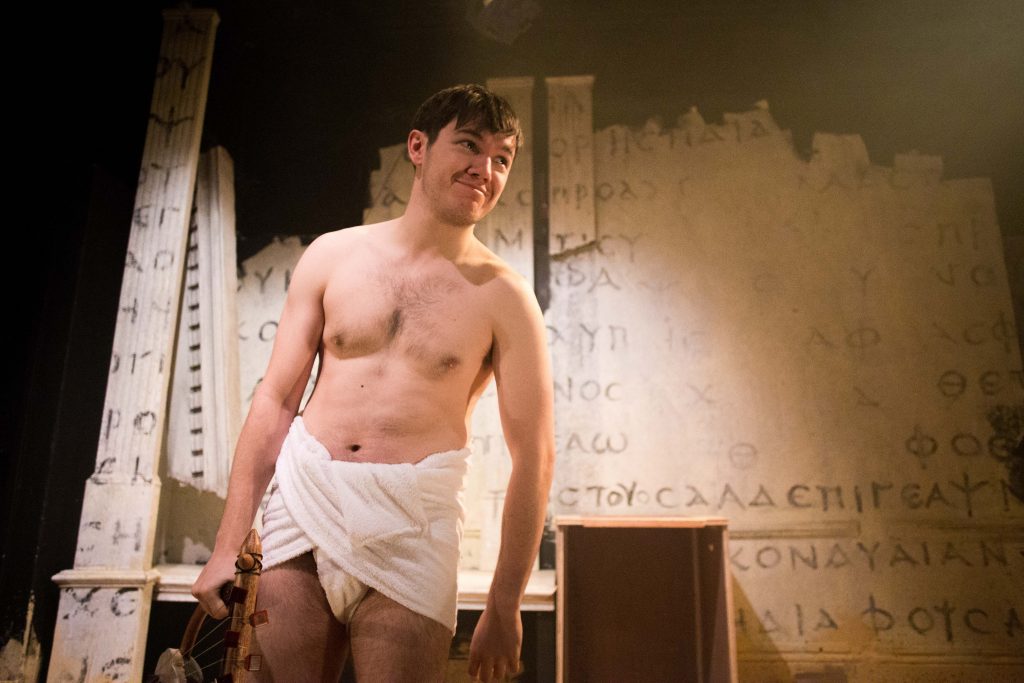 It’s an evening of two parts. Phil Lindley’s design of half-erased fragments of papyrus and masonry is intriguing but, against it, the opening story of an archaeological dig feels oddly indecisive. Once the local peasantry re-emerge as satyrs the language begins to clash and flash in high Tony Harrison style, and the physicality and the intention start to sing. Once or twice someone wrestles with the verse rather than surfing on it, and some of the ensemble speaking still needs attention.  Oh, but, when Silenus is given the manifesto of the playwright, it’s in the tremendous hands of Richard Glaves, who know how to invoke our pity and despair without tearing a passion himself. He who also flourishes subtly as an egyptologist finding more grist for poetic imagination in 3000-year old laundry lists and housing applications than in the lost Sophocles  which obsesses his more blinkered colleague.  The Apollo of this play is, rightly, a self-regarding, sculpted son of privilege (who nevertheless yells like a pale imitation Yorkshire satyr when balked) in telling contrast to the physically heterogeneous and gloriously unselfconscious satyrs he despises – it’s a contrast that could be made more of, but it’s cleverly done.

Both ancient Greek and clog-dancing are done convincingly to my ill-educated eye, but there’s a little point at which maybe some of the fire of the piece dies. Peta Cornish perfectly judges the thanklessly small part of the nymph Kyllene, remonstrating with the satyrs for their undirected enthusiasm.  Maybe that’s why, when she is bundled out of the way, it’s a piece of boisterous boyishness, and not the near–rape of cultural pretension that it might be. Likewise, the beating of Silenus (designed with his customary imaginative lucidity by Philip D’Orleans) is executed with brilliant, metric precision, but as yet lacks that little tad of intent that might make it as shocking, and moving, as it is confidently symbolic.

It adds up to a slightly ‘housetrained’ piece of theatre (buoyantly noisy though parts of it undoubtedly are), earning polite rather than bacchanalian applause. One reason might be the age of the piece, written in fury at the height of Thatcher’s calculated philistinism. Do we really still feel in the age of YouTube self-starting expression and performance from all sectors of society, that self-expression is the fortified privilege of the elite? If you sit in the audience at the National you might think so, but there is a world elsewhere.