Review of: The Kite Runner

Literary adaptations are no stranger to our West End Theatres, The Curious Incident of the Dog In the Nighttime, Matilda, 1984  and War Horse all having enjoyed critical and audience success alike in the last few years. The Kite Runner might strive after the same excellence, but falters in attempting to create a theatrical language with which to successfully transfer the bestselling book to the stage. 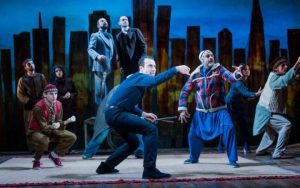 The largest problem with this piece is the production team’s decision not to stage some of the most visual and beautiful moments in the story. The image of thousands of colourful kites floating over the skies of Kabul becomes a recurring snapshot within the original book, yet this production chooses purely to narrate much of the kite fight and indeed a large amount of the turning points of the play. Surely in transferring a piece of fiction to stage one should utilize the visuals that the theatrical medium presents, and not simply recite paragraphs from the book with other cast members walking around in the background?

Having said this, Ben Turner’s interpretation of the narrator roles goes some way to redeem this directorial decision. In the second act particularly, he grips the attention of the auditorium, obviously feeling more at home in portraying a slightly awkward twenty-something than a seven-year old living in Kabul. However, the standout of this production is without a doubt Andrei Costin and his portrayal of both Hassan and his orphaned son Sohrab. Costin portrays an innocence and a childishness that Turner struggles with at first, and lends the pivotal role of Hassan a gentleness and a humility that is neither sentimental nor overbearing.

In literature form The Kite Runner is a densely-packed tale with plot points left, right and center, rattling off the page in a way that written fiction manages so well. Translating this into theatre is much more of a challenge, as there is a tendency for certain key moments to either be over-emphasized or not given enough time to breathe and settle. Sadly the set, while beautiful, doesn’t always help these moments – fan-like flats descending from the wings are lovely to watch, but the projections that make up a lot of this part of the design don’t seem to have any sort of uniting factor.

Sadly, the most impressive parts of this production were the plot and the way the story winds to its heart-warming conclusion – pieces which stem from Hosseini and his art, not actually from the production team. This slightly stilted play hasn’t taken the jump needed to re-transform the book to suit this new medium, relying on The Kite Runner’s pre-existing literary excellence rather than refreshing it for the theatre. I’d advise using the money you’d hypothetically spend on a ticket to buy the book instead.