Review of: Stangers in Between at the King's Head Theatre

Strangers in Between reaches out and shows us that caring for each other makes us all feel better about ourselves and that forgiveness helps heal our wounds, emotional or physical.

Tommy Murphy’s Strangers in Between wings its way from Oz, via a successful European premier performance at the King’s Head theatre, earlier this summer. So successful was this comedy it has boomeranged for a second outing.

Growing up in a backwater of Australia is no easy thing for a young gay sixteen year old but running off to the bright lights of Sydney is equally challenging. Shane, our rambling, insecure adolescent, sexually burgeoning youth is determined to leave his parochial and bullying past behind him. However, settling into the diverse social mix of sleazy King’s Cross is both confusing and exhilarating in equal measures. Shane, played with wide-eyed enthusiasm by Roly Bothy is an endearing character, as he lurches from needy experience to experience – some sexual some social – but all heartfelt. Like a charging bull he tackles each episode with innocent candor and vigor; this innocent abroad  delivers lines to make you laugh and weep. Under the steadfast direction of Adam Spreadbury-Maher the play has pace and style and to his credit it manages a fine balancing act between froth and substance.

Tommy Murphy sure can write a good line in Strangers. He has a sensitivity about a situation while at the same time capturing the absurdity of sexual and social encounters (the comedy sex under the sheet was hilarious). He beautifully captures the complexity of sexuality and equally exposes the need for love and responsibility. 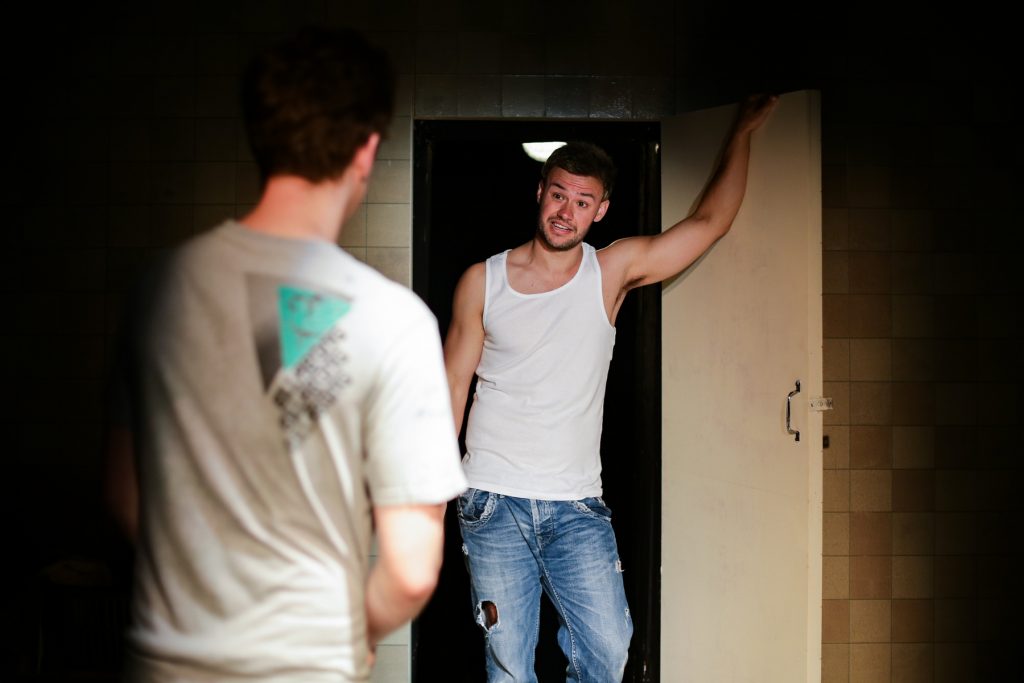 Shane, the dopy teenage shop assistant, who has difficulty working the till let alone giving change, nervously navigates the seedier side of Sydney with amusing and heartfelt consequences. He is drawn to the handsome Will, vested and muscle-bound and befriended by the older paternal Peter, a clucking and caring safe pair of hands! (Wittily played by Stephen Connery-Brown). This trio are involved in a range of antics which lets us view a world not only of fun but of darker rather consequences too. Shane troubled and scared comes to realise that although the grass may not always be greener on the other side, returning home is not option, even if sorting out this new world is a lonely challenge. As he struggles to free himself of the shackles of conformity he grows to realise that relationships are worth investing in and that his fear and loathing are as much about himself as they are about other people.

The company are pretty slick as they shift effortlessly from scene to scene with minimum props or set but much of the credit for Strangers in Between must go to Tommy Murphy – writing and craft that makes you wince, smile or choke all at once. There are cracking lines about spicy lettuce, rugby league calendars or brilliant non sequiturs about coat hangers! Ultimately, Murphy’s play reaches out and shows us that caring for each other makes us all feel better about ourselves and that forgiveness helps heal our wounds, emotional or physical.