This is the story of two real people, Richard Marsh and Katie Bonna, who meet in a cheesy club one boozy night and subsequently set off on a long, eventful journey to the inevitable destination of coupledom. Two actors, Ayesha Antoine and Felix Scott, play the protagonists and a small collection of others in the characters’ friendship circles who aid and abet the love story, but also place obstacles on its path. The production is extremely minimalist in design and relies on the script and the actors’ skills to succeed. Tightly directed by Pia Furtado, the audience is in safe hands with Antoine and Scott, two very accomplished players, who never miss a beat, keep the action flowing and delineate each character so clearly that there is never confusion.

‘Richard Marsh’ the character is a geeky, speccy and really decent bloke who is nevertheless hot enough to be able to score plenty of women for shags and sometimes, relationships (a quibble re: casting – Felix Scott is a bit too chiseled and worked-out to convince as the ordinary guy Richard is meant to be). Out on a stag night with his lairy mates, including his crass Northern friend Westy, he is the sensible one, commenting on their excesses (there is lots of direct address in this play) and yet also succumbing to the drunken vibe. ‘Katie Bonna’ is out on a hen night at the same time, with her best friend, CC, who speaks very irritatingly in text-talk, and a connection is made between Katie and Richard in the time-honoured fashion of eyes locking across a dance-floor. This scene continues with a pattern that is used throughout the play: will-they-won’t-they-get-it-together?

Over two years, Richard and Katie collide at various gatherings, facilitated by the fact that their best mates are now a pair, having got it together after the club (in spite of the fact that CC lost consciousness in the gents). One of the great mysteries of this play is how the incredibly posh CC, who’s family own a ‘stately home’, finds true bliss with a chap that sounds like his family breed racing pigeons in a two-up, two-down in Bradford. Throughout the story, there is class-mingling to a degree seldom seen in reality – Richard’s rival is the handsome Matt Priest, who sounds like royalty (and is a complete knob) but who we are meant to believe is cat-nip to a much more down-to-earth Katie.

Each scene where our contemporary Romeo and Juliet meet is richly comic with lots of pathos: at one point, a pop festival is brilliantly conveyed, with all its opportunities for missing the best bands, and finding the wrong people. It would be spoiling the show to reveal the night’s biggest laugh which occurs after this, but suffice to say, it mixes drunkenness and sex, something of a theme of the play as a whole.

DIRTY GREAT LOVE STORY is accomplished and enjoyable, full of recognizable love story tropes, but original enough to hold attention. Its territory is youthful, and its tone that of chick-lit. It is also strangely old-fashioned; though conceived only seven years ago, and much developed since then, there is nothing in it which refers to our troubled times or to sexual politics or to the spiritual emptiness of a culture where it takes huge quantities of booze to bring lovers together. That might sound po-faced, and is perhaps an irrelevance to this particular tale, but this reviewer was left not completely satisfied because of those omissions. 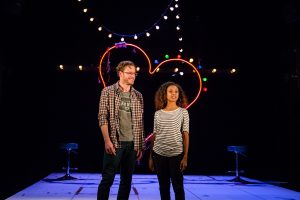