Review of: Raising Martha at the Park Theatre

A stellar cast twinkles in an evening that rather sputters

Producers Michael James-Cox and Tom O’Connell, have been making a mark steadily of late. O’Connell in particular has had successes at the Park, including one West End transfer. The writer, David Spicer, has been a steady presence in comedy across the media since the 1990’s and recently  rattled a few cages with his edgy, honest play about militant fathers, Superheroes. The director has been just about everywhere, in fine company, something clearly on display in Raising Martha. Every member of the cast has brilliance to contribute,  with a multi purpose design by Rebecca Brower also playing moodily with precise locations, and suggests structures failing, and wearing into precarious ruin. 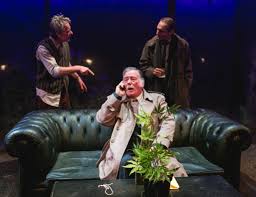 The play promises to ‘tackle terrorism, animal rights and six-foot frogs’ and, in the end, doesn’t. Taking its start from an act of grave-robbing by disorganised and distracted animal liberation activists, it is sporadically sown with lines carrying scent-notes of Wilde and Orton. It points the skewer at this intriguingly grey moral area, even asking out loud at one point what a right is, but the argument never gets started.  Flashes abound, like ‘My father gives me everything I want – it’s why I feel so deprived’ and ‘It’s not an interesting philosophical point. It’s real life’. But any trace of an argument meanders about in amiably self-conscious madness, sidelining too often into jokes which do not justify the time.  There are also directorial oddities; one excellent sight-gag peters out altogether.

An extraordinarily heavyweight cast wring every ounce out of their characters, and there is a particularly warm piece of Hapless Clown from Tom Bennett as the least effective terrorist, though even he seems very occasionally to be enjoying himself in spite of the job in hand, rather than with it. And, in the end, when a line comparing human rights to male nipples floats into the air and dissipates unremarked, Orton and Wilde begin to clash with whiffs of Ayn Rand.

The audience could be heard reassuring each other that they had ‘quite enjoyed’ it and that ‘it worked’. It could have thrilled and threatened.