Review of: Nothing To Say

A beautifully surreal and poetic work from a master clown. A colourful Keaton-esque clown finds himself in a domestic catastrophe, inviting our compassion and our creativity.

Leandre Ribera, the creator and performer of Nothing To Say, is quoted in the programme as saying “The clown’s role is to create a hole to look at humanity from a different perspective.” Remarkably, he achieves this not only without saying a single word, but first without even stepping onstage. As the audience takes its seats, the stage is littered with what looks at first glance like Autumn leaves. However, in Leandre’s world, nothing is what it looks like at first glance. Objects and people merit more attention – a different way of looking, perhaps, or just seeing them for what they are, as if for the first time. What I assumed was set dressing symbolising the closing of the year turns out to be, in fact, hundreds of pairs of yellow socks.

That is not to suggest that here design takes precedence over performer. For the seventy minutes without interval of Nothing To Say, Leandre held us rapt. He claims (in a post-show Q&A) that the production, first performed in 2013, is the culmination of thirty years’ work with the character – with some of the material shown here being twenty years old. I don’t doubt him – we are evidently in the hands of a master. Hands that won’t agree, won’t obey and are unable to impose order on even the most mundane of objects. 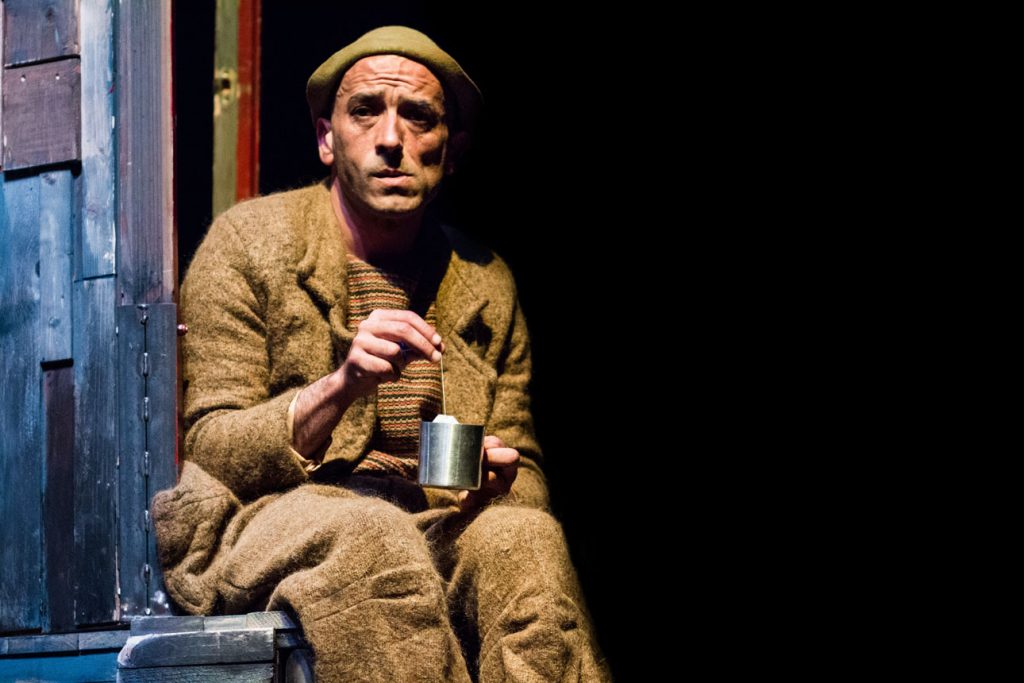 In expressing the tyranny of objects, Nothing To Say bursts with invention. A golf club gains a life of its own. Dirty yellow socks multiply endlessly. A door cannot be opened, except by walking around its frame to the other side – an abstract antilogic which is maintained throughout and occasionally manifests moments of pure magic. Leandre encounters each catastrophe with his characteristically stoic stone face – like a more colourful Keaton.

Perhaps due to the long gestation period of the show, it is suffused with a sad nostalgia and the regret of experience. This show demonstrates the potential of clowning to strive towards poetry. Whilst Leandre is assisted onstage by “volunteers” of varied levels of enthusiasm, he is always left alone, unable to communicate or to draw them into his world. Sat on the steps to his disembodied front door with a hastily-selected postman, drinking tea together in silence and sharing a smile, Leandre expresses the gulf between human beings that is the real expression of our attempts to empathise. The character is a mime – in his world, he has nothing to say – but he crosses the boundary of our world, where we have nothing to say to each other.

With this is in mind, Leandre’s comic struggles with the inanimate are given a hint of melancholy. His life is a catastrophe of domesticity – filling the gulf of human contact with objects which frustrate his efforts to control or even engage with them, he becomes a naive reflection of our own materialistic loneliness. One particularly poignant and bleak skit sees him walk in endless circles with an audience member around his skeleton of a home, pointing out his furnishings with a gradually diminishing enthusiasm. In fact, it is the audience-participatory sections which most strongly articulate the difficulty of trying to connect – Leandre’s silent struggles to find a common world with these bewildered guests, as they misunderstand his silently-cued suggestions, comically gesture to an explanation of why we all feel alone. As his most uncooperative objects, they (and we) become the clowns. Pathos and bathos compellingly combine in a sequence which saw Leandre interact with an audience member playing his reflection who could not tell between his right and left.

Don’t get me wrong – primarily, Nothing To Say is deeply warm and highly entertaining. But this is a clown show that is unafraid to gesture towards what is behind that laughter – what, if clowning makes us free, we need freedom from. The image of the clown, unable to synchronise with his own reflection, might hold the answer. If you haven’t already got a ticket for the sold-out Nothing To Say, you’ll need to find that answer in the mirror yourself.

Nothing To Say is being performed as part of the 2017 London Mime Festival until Sunday 22nd January http://mimelondon.com/leandre/