Review of: The Nature of Forgetting at Shorditch Town Hall

A high energy performance about memory loss from Theatre Re

Theatre Re’s The Nature of Forgetting is an exploration of memory loss based on neurobiological research and interviews with people living with dementia. We begin the show on the morning of Tom’s 55 birthday. His daughter tries to help him dress for the day, but clearly Tom has difficulties. As he looks for his jacket and tie along two large costume rails, which serve as a metaphor for the jumbled memories in his head, he discovers his old school blazer and we’re transported back to his school days.

The show is then made up of a collection of memories and reminiscences – showing Tom’s school days, meeting his future partner, their nascent love affair, university, marriage, his first job as a teacher and the recurrent theme of a car crash which we assume killed his wife and left him with the loss of memory and brain function he now suffers from. 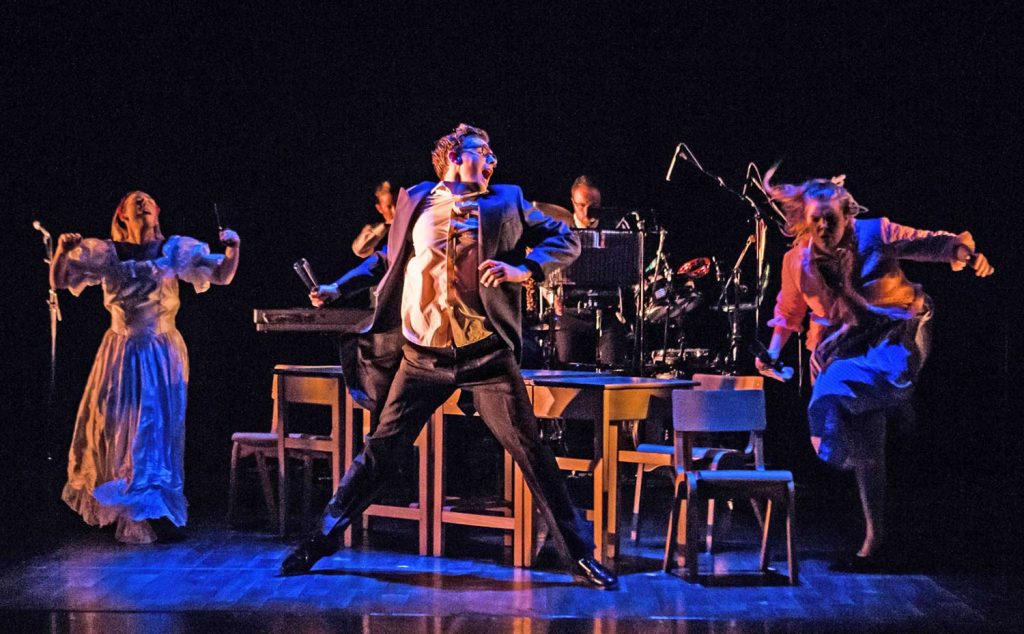 The performance style moves between dance and the coporial mime that is the foundation of Theatre Re’s work, all performed to live underscoring and sound track by the very talented Alex Judd. The cast are young and pleasingly enthusiastic. Particular mention should go to Louise Wilcox for her portrayal of Tom’s partner; her energy and joy on stage were infectious, and the characterisation strong with the minimum of effort.

The staging itself involved two open wings decked out with costume rails a jumble of set and props, and space for the actors to sit in and watch the action when not on stage, along the back of the playing space the musicians were set up, with an empty space left between these elements, defining a playing area in the middle into which various elements would be drawn from the wings to create the various memories. I’ve seen this staging used many times, and there is always something magical about seeing objects scattered in the wings suddenly come together to create images in the space. The clearest and best image in The Nature of Forgetting was a static bicycle ride that was beautifully put together and executed. I’ve seen the same image used in several shows, and this was one of the best versions I’ve seen.

But that was somewhat the problem with this show. I had the horrible feeling I’d seen pretty much every element of the show before, and in many cases done better. Its central theme of memory loss wasn’t as strong as it could have been; it didn’t feel like the show was so much about loss of memory as it was about reminiscences of lost love and lost youth. It seemed we got a pretty much coherent backstory of Tom’s full relationship with his lost wife, and with the exception of one moment when he didn’t recognise his daughter, it was hard to tell any of his memories were actually lost.

As a story of remenicence and lost love it remained quite superficial. These were the same themes covered in Theatre Ad Infinitum’s Translunar Paradise. The success of that production was in its specificity, I could feel the characters loss precisely because I could understand the characters’ unique and specific journey that had made them who they were. However the characters and journey in The Nature of Forgetting felt generic: the idyllic school scenes, and young puppy love turning to adolescent physical love, then jobs, marriage, and finally argument and loss. The characters could have been anyone, and as such they were no one.

That being said – I should say the audience absolutely loved the show. It was a full house, and standing ovation. All of which points to the fact that art is subjective, and I’ve given a nod to the disparity between what my companion and I thought of the show and the clear feeling of the rest of the audience, with the stars I’ve given for this review. We both felt it was a solid 3 star production, however the audience response clearly called for more. I’d suggest you should go along and make your mind up for yourself.

As an addendum, I just want to cover what happened after the show, indeed what has happened after every show I’ve seen in the Mime Festival that so far. After the bow a cast member steps forward, drops character and starts telling you to go online to twitbook all your friends about how much you liked their show: “If you enjoyed yourself tell all your friends to buy tickets, if you didn’t (insert joke about keeping your mouth shut / telling all your enemies to buy tickets).”

It is an issue I covered in an article at the Fringe back in 2014. I don’t know if this is official Mime Festival advice, or it’s just a trend that each company is following – either way it is thoroughly infuriating. Why, as an artist, do you spend an hour working your hardest to immerse an audience in a unique and powerful universe of your creating, only to drop character and crush that universe the second the show is over? Particularly in the case of a show like The Nature of Forgetting which had already sold out. All I can do here is repeat my plea from 2014, please stop begging after the bow! It is doing everyone, not least the magic of your own show, a disservice.

The Nature of Forgetting is being performed at the London Mime Festival until January 20th 2017. Listing information and bookings