Marée Basse had moments of beauty, warms and humour, but never managed to break through to a moment of virtuosity where it could become more than the sum of its parts.

One of the constant battles for New Circus seems to be the need to find a narrative justification for the turns. So the tricks we see and the world they inhabit make sense as a single theatrical entity. The world created in Marée Basse achieved this well. I believed in these two oddly washed up characters. The staging recreated in the inside of their house. Bare wood, and tin boxes, an old TV flickering in the corner, and ropes and pullies set up as ‘labour saving’ devices to fill bottles, deliver tins of biscuits and the like. 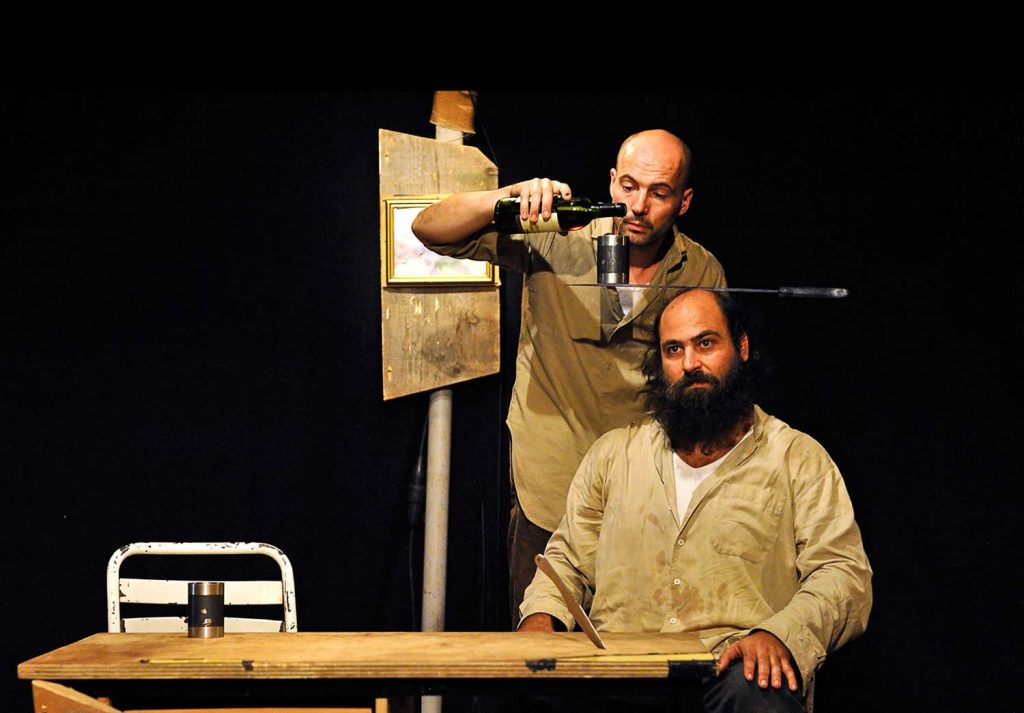 Benjamin De Matteïs and Mickael Le Guen’s faded variety acrobats were both sympathetic characters – it was like watching two very old friends, both utterly familiar with each other, yet still willing to play. The obvious affection they feel for each other, and the warmth underneath their rivalry and one one-upmanship brings an endearing quality to the performance. Even the gentle amber lighting exudes a cosy sense of warmth, like the light from a glowing fire. There is definitely something thoroughly likeable about this production. All of which begs the question why didn’t I enavy it more?

I think ultimately it was this: the central premise of the production was two men, past their prime, very familiar with each other and their environment, lazily alleviating their boredom with occasional tricks and one-upmanship. But there in lies the problem. It is very hard to watch two characters feeling bored, being lazy and past their prime – without the production itself feeling boring, lazy and past its prime. That is why performing a bored character, and or, doing something deliberately badly on stage are some of the hardest things you can attempt theatrically. You need something virtuosic underlying the performance in order to make it more than the sum of its parts.

For me that was the problem with Marée Basse, it never managed that virtuosic moment that broke us out of the sleepy laid back setting. The slapstick of failed acts and prat-falls was never funny enough, the acts when they worked weren’t spectacular enough and the set, for all its bells and whistles, was never ingenious enough.

Don’t get me wrong, there was nothing to dislike about this performance. But in the final moment when Benjamin De Matteïs and Mickael Le Guen’s characters sit watching an old cartoon, you get a sense they are utterly familiar with each other, the cartoon and the material they’ve performed. This scene could be repeated by them ad infinitum and nothing would change. The complete inconsequentiality to the characters, of what they’d been through with us, is then further underlined as they notice the audience are still there, having apparently forgotten, and usher us out so they can continue watching TV.

Marée Basse had moments of beauty, warms and humour, but never managed to break through to a moment of virtuosity where it could become more than the sum of its parts. In the end the show remained just as inconsequential for the audience as it did for the characters we’d been watching.