Price:
From £10
Reviewed by: Gregory Lake

Last Summer, I gave four stars to James Thierrée’s The Toad Knew at the Edinburgh International Festival, for pioneering “a physical style unlike anything I have ever seen before.” Little did I know that, just across the meadows at Summerhall, another man was doing the same. Thomas Monckton’s show Only Bones does not boast technical wizardry or spectacular visuals. However, he still runs rings around his audience’s imaginations – and all from a stage space measuring one metre squared. Be thankful, then, that we have been given another chance to catch this low-tech marvel. 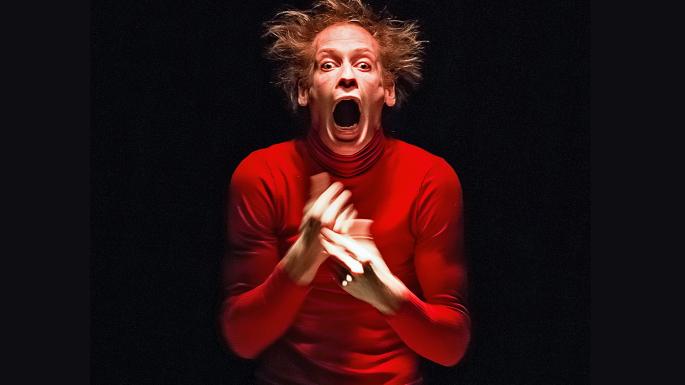 I make the comparison with Thierrée’s extravaganza not to diminish either work, but because despite obvious differences in resources and scale, the two pieces have a surprising amount in common. Both demonstrate – and then exceed – the limitations of the expressive body. Monckton’s elastic physique, framed by one low-hanging lampshade, is truly something to behold – unruly, uncontrollable, unreal and utterly captivating. This is the kind of work that could change someone’s professional life forever – although I’d wish them luck in attaining Monckton’s mastery of the physical form.

From the beginning, then: Only Bones was created with the limitations of one performer, one light, no narrative, no text, no set, and all within one metre squared. From here, Monckton strips back his aesthetic even further – first only to hands, then a headless body, before eventually discovering his own head. This is a smart choice – we search initially for meaning in the face. Depriving the audience of this safety net draws our focus instead to Monckton’s complete control of his extremities. When Monckton’s playdough-malleable face finally comes into view, it is as an equal partner to the stars of the show – his hands.

Indeed, for at least a third of the show Monckton’s hands hold centrestage. Whilst knowing that the episodes of Only Bones are not intended to form a narrative sequence, it is hard not to project one onto this delightful double act. These bickering, trickster flesh-spiders squabble, fight, scheme and (occasionally) comfort one another. There was no applause between these episodes – a testament, I believe, to our unwillingness to break into this world. Between them, they elicit both laughter and audible expressions of empathy from the crowd. It is the latter that is another distinguishing factor between Only Bones and The Toad Knew. Monckton has a palpable connection with his (much more intimate) audience – even with his face obscured by a lamp.

The strongest material undoubtedly emerges once Monckton’s full body is on show – in particular, a hilarious but unnerving sequence in which Monckton’s efforts to mould his facial expressions only leave him looking more and more grotesque. However, the virtuosity on display – especially in the finale, a bone-breaking breakdance – did leave me missing those moments when more was left to the imagination. Monckton is at his best when he is stretching our capacity for fantasy, not just our credulity.

Only Bones runs at the Soho Theatre until 4 February. Buy tickets here.