A wonderfully crafted array of puppets, projection and performance make up a piece that drifts and falters with too little story to hold it.

Plexus Polaire’s Ashes at the London International Mime Festival marks the company’s UK debut and boasting ‘actors, life-size puppets and video projection’ in the festival programme, I was intrigued to see what Lecoq-trained director, Yngvild Aspeli and her trio of actor-puppeteers would bring. The piece is based on Gaute Heivoll’s novel Before I Burn, which in turn is based on a true story mapping the events of a terrifying month in 1970s Norway, during which an arsonist targets a small town. 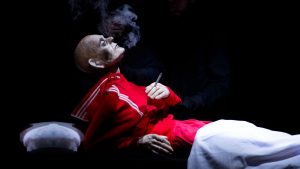 Ashes opens with a miniature vista of the town in question; a series of white houses floating high up at the back of the stage, suspended in time and space. We meet our puppet protagonist: sickly-looking with flame red hair and pale skin, igniting a lighter, petrol can in hand. He stands behind the gauze of a projection screen that spans the whole front of the stage. The screen will remain throughout, placing the action behind it in an eerily distant memory-space, both haunting and detached. As he kneels, a lick of projected flame lights up one of the little white houses at the back; the burning has begun. For me however (and admittedly this could well be down to a matter of taste), the projected “real” flame (the kind one might see on a “flat-screen fireplace”) instantly broke the dream-like softness of the hand-crafted world that had only just been born. If this was a choice, then it worked, but too frequently in this piece did the projected images have a sense of “because we can” rather than because it was needed.

We then meet our human protagonist, a writer. Sitting in front of the projection gauze at a desk cluttered with beer bottles, he begins to write. We see his written text on the screen and are given a moment to read before he deletes it in frustration. He pauses and then begins again. Again we read, again he deletes. This process of writing and deleting is a device that allows us to garner that he was a baby at the time of the burnings in the village and that the events of that time have haunted him his entire life. The process is heavy-handed however and our solo actor “plays” too much; each time “thinking with frustration”  then having his “epiphany moment” before writing and starting again, even mid thought or mid-sentence. It’s a sequence that slows the pace when the piece has barely begun and frustrates us because the rhythm is too repetitive and very little is learnt. After a third “delete/think/epiphany”, the writer drinks from a glass of beer (one of many, we are inclined to deduce) and the puppet world returns.

It must be said that the puppets themselves are beautiful and one cannot help but marvel at the craftsmanship behind each one. We meet the elderly puppet-parents of the flame-haired arsonist in a delightfully intricate mini-living room set. Here the puppets really come into their own. Their life-like micro-movements as they drink tea and read the paper are a tribute to the sheer dexterity of the puppeteers behind them; technically it’s brilliant. Later in the piece we are treated to a whole stageful of life-sized puppets – the village watching the flames, aghast. They stand there staring out at us and then slowly retreat into the darkness. They are strange and beguiling and again, wonderfully crafted, but the moment is slow and adds nothing to the story, which drifts on falteringly. And this for me sums up the piece as a whole; technically it’s genius, more than that? I’m not sure.

What continues is a slowly emerging tale of arson, discovery and the dismay of the arsonist’s parents and the village. Our writer becomes increasingly agitated, drinking more and enduring visits from a giant dog-beast of a puppet. Depression? Anguish? We just don’t know.. We visit memories of his father – a skier puppet which flies around him before resting, smoking on a bed. There are some tender moments here, but it all feels too tenuous, even contrived and we are for the most part, left in the dark. Certainly the role of the solo performer who must act with an entire cast of puppets is no mean feat, but here it is seldom satisfying. There is one moment however, in which our drunken writer is himself “puppeteered” by his fellow performers. What emerges is a fantastic choreography of appearing and disappearing beer glasses, which taunt him with seemingly impossible tricks of timing. The arsonist puppet insults him in the midst of this mess of alcoholism and for a brief moment the two seemed inextricably intwined in each others’ lives. This gem is never developed however and for the most part, our central actor is too often left with too little to do, rendering the action stilted and the performer seeming more wooden than the puppets around him.

The original music is rich and varied; floating vocals and harmonies initially adding to the dreamlike quality of the puppets behind their gauze. Later, in a montage of lighting and burning, lighting and burning again, the music builds to an exciting fast-paced inferno. This soundtrack however, only “subtitles” the action – angry for angst, mysterious for mystery and so on – too heavy a paintbrush for a stage already filled with images. It left the created world dense and breathless, well-crafted but obvious and essentially unjustified in its emotion, especially given that we had no empathy with any of the characters. Indeed, the lyrics of a song towards the end of the show, as the arsonist is seen alone and lonely, ask the question “How did I come here? How did I find myself here?”. We the audience are left with the same question, the same as when we came into the auditorium.

The piece was ultimately ambiguous and dissatisfying. The story never developed beyond what one could read in the festival programme (‘Years later a young man becomes haunted by the story.’) and although the relationship between the puppets and the human writer seemed to be deeper than “they were simply part of his memory”, one was never given anything more to hold on to. Certainly I am not the type of audience member who needs a story, this could have been a magnificently surreal dream-scape filled with poetic narrative and strangeness, but it was the hint of story (two stories even!), that were never built upon that left me frustrated. All the pieces of this intricate jigsaw were beautifully crafted and there’s no doubting the individual skill of its creators, but as a whole, Ashes seemed to try to do too much and actually did very little.