Caryl Churchill’s critically acclaimed Escaped Alone has returned to the Royal Court almost a year after its premiere, ahead of a small UK and US tour this spring. Behind an unassuming fence, with teasing chinks of light, hides a fractured and distressed world that we explore through four female characters – a neighbour and three friends. Churchill is known for writing dialogue in quick, half sentences, cutting out all superfluous words, and true to form the women talk over each other in a constant stream of unconnected speech. It is through this paucity of words that we build intimate portraits of these women, clear reliefs of how they feel about everything from small TV shows to large family rifts. The decision to use this clipped dialogue lends a sense of unforced but exaggerated familiarity It invokes a stylised version of the short hand that we all use in the company of friends – referring to past events with a single word, in a code that signals long term friendship. 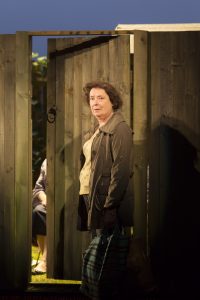 Women’s conversation is a private world, not often displayed on stage so frankly or openly (or with so little time dedicated to traditionally feminine subjects).Unfocused in subject matter, the garden dialogue meanders through families, the local area, and past working lives, peaking with a complete acapella rendition of Da Doo Ron Ron. Each woman has her moment in the spotlight, a chance to unfold their inner feelings in an aside to the audience. June Watson is particularly snort-worthy, as quick witted and sharp tongued Vi, and Kika Markham gives an incredibly sincere study of a long standing sufferer of depression as the melancholic Lena.

Interrupting this suburban garden chat on a sunny afternoon, are apocalyptic visions of the end of modern civilisation delivered by Linda Bassett, in a blacked out, red filament trimmed, stage. Each with their own distinct story of how society has broken down, including a famine caused by too many cookery shows using up all the food, these monologues bounce from the frivolous to disturbing, the audience laughing and wincing in equal measure. Bassett effortlessly switches between her benevolent, affable Mrs Jarrett character, to this unflinching narration of doom in an instant. Buether’s set creates a fitting ‘inter-space’, a non geographic but menacing location that allows for Barrett’s voice to take on the whole focus for these scenes.

This juxtaposition should feel disjointed and confusing, but somehow the opposite subject matters of monologue and dialogue, the extreme and the banal, melt into each other, drawing strength from their differences and elevating each other through contrast. Each half starts to echo the other as the play continues, with increasingly dramatic and life changing revelations from the women in the garden, balanced by more mundane focuses in Barrett’s pieces. Churchill’s longstanding collaborator James Macdonald’s prowess lies in opening up spontaneous moments of laughter in among such sadness and poignancy. He acts as a translator, through which Churchill’s ideas pour forth, and with admirable attention to detail, draws closer this play of two halves.

This play frequently has a feminist label attached to it, whether because of Churchill’s early work, or because she specifies that the all female cast must ‘all be at least 70’. However, in terms of content, it never specifically addresses the causes of women in a political way. Is it simply the fact that one never hears a narrative from four older women without it revolving around their families, husbands or uteruses that makes this a piece of radical, if unovert, feminist theatre? I’d prefer to think of it as just theatre, with the hope that very soon, having all female characters, or casting older women, won’t feel quite so revolutionary. Describing something as feminist, simply because it shows women talking about non gendered topics, speaks more to the sexism of most main stream theatre, than it does about this production. Feminist commentary or not, Churchill continues to create the kind of theatre you remember all of your life, and Escaped Alone is simply the latest installment of her genre defining work.

Escaped Alone continues its run at the Royal Court until 11 February, playing at 7.30pm Monday – Saturday, with matinees at 3.30pm on Thursdays and Saturdays. You can buy tickets from their website or through their Box Office on 0207 565 5000