Review of: The Convert

It seems rather ironic that the night 200 protesters stood outside the PrintRoom calling for ethnically accurate casting, The Convert at the tiny Gate Theatre around the corner was proving how theatre doesn’t just have to be about those white, wealthy, or even Western at all. 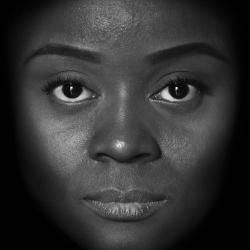 The Convert boasts a rich and tightly-woven script, not shying away from long, drawn-out passages spoken in the Rhodesian native language, trusting in the verisimilitude of its naturalism as well as the audience’s ability to understand proceedings without having to be spoon-fed the entire way. It is rare that a playwright has such faith in their storytelling ability, and here Danai Gurira’s risk is well-taken. Using the Rhodesian vernacular onstage brings in all the culture and history that would have been extremely hard to portray visually on the Gate’s tiny stage, and allows Rosie Elnile’s set design to shine in its simplicity. The Victorian aspect of the set (as specified in the script) was rather minimalist, however the pile of earth in the corner perfectly summed up the conflict between those who did and did not accept the white man’s reign – soil vs concrete marking an intense clash of cultures that would only grow more violent as the story developed.

The plot itself came rather close to melding into melodrama at certain moments, but the astounding ability of the entire cast kept the piece heart-wrenching and painfully human. Stefan Adegbola’s swinging between religious power and absolute helplessness was captivating to watch, a true portrait of a man struggling to locate himself between the love of the Christian religion and the atrocities being committed by those who introduced it to him. Mimi Ndiweni was mesmerizing as Jekesai/Esther, Michael Ajao capturing the helplessness of a Rhodesian man stripped of the right to make decisions and therefore of his masculinity with ease and poise. This piece shows a multifaceted, many-layered struggle of a people caving in on itself without ever straying into moralizing territory. The script never judged, it neither condemned nor commended either the characters who adopted the white man’s god and their culture or those who stayed believing in the power of their ancestors. There was no right or wrong, just a dawning realisation of the futility of the situation all had been placed in, a futility that was heartbreakingly obvious the closer The Convert drew to its inevitable conclusion.

This is theatre at its finest – using the art form to channel anger, injustice and showing a modern London audience the atrocities of the past. What a glorious contrast to 100m down the road.