Review of: Birthday Suit at the Old Red Lion

Barnes’ snappy dialogue treads a clever line between cruel and kind - an Ayckbourn-esque comedy for the Uber generation.

The Old Red Lion may be old (400yrs!) but it has a youthful spring in its step with this production of Birthday Suit by David K Barnes – a sparky comedy with some depth as it exposes the personal fears of the birthday party revellers.

All in all, the birthday bash Richard had planned turns out to be a drunken and revealing evening for all. This comedy has moments of original comic relief whilst also mining the unhappy depths of each of the characters. None seem happy or content with their lot and none really have a clue how to deal with it.

A stylish set on a raised platform suggesting a rather smart high rise apartment, designed by Georgia de Grey, who made splendid use of limited space and managed to give the impression of a high tech place of style with its balcony exposed the night skyline.

The birthday bunting hangs around and crisps and nuts are up for grabs – party time! An invite is extended to work colleagues from Richard; a senior accountant from the upper floors of a well established firm. The invite is taken up by the newbie on the block, Diane, who drags along her needy longish-term boyfriend, Nick. She is keen to network and sees the opportunity to ingratiate herself with senior personnel and if she can get her boyfriend a leg-up with his career, so much the better. However, Nick is more interested in a leg-over than furthering a career not yet established! 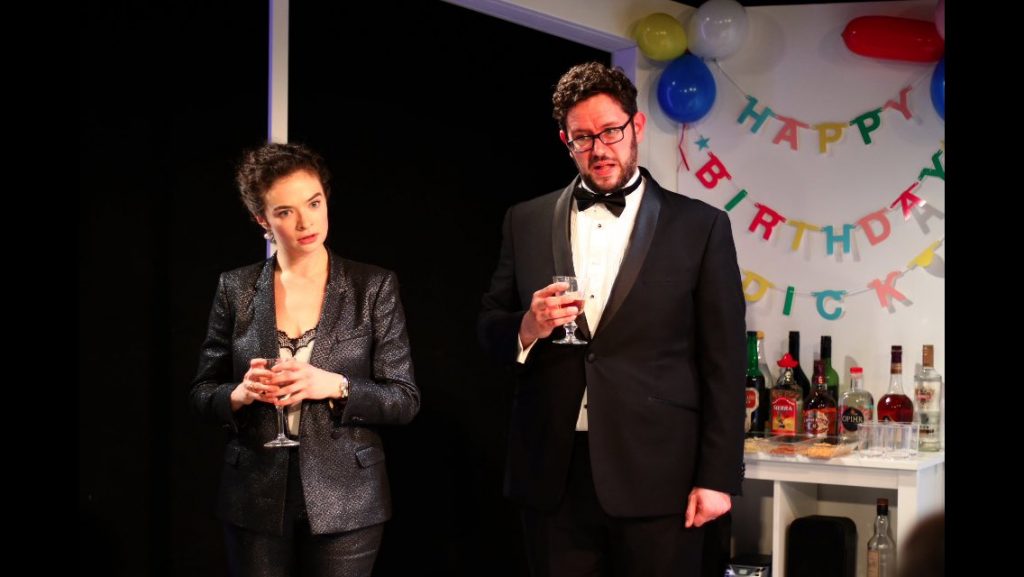 The ambitious Diane has very high levels of panics at the social challenge and Barnes has some amusing lines about the demands of social chitchat. The panic builds when they realise no one else is coming, especially when the neurotic, tense and spiteful Valarie, ex wife of Richard, arrives on the scene. Much comic mileage is to be had while the partygoers play out their anxieties over the course of the evening as they are ‘marooned in misery’. Not misery for the audience though, as many a laugh was raised from their painful social encounters. The tin of chocolate antics was very funny and as the group slowly got drunk the bitter sweet banter was both wince making and amusing.

Barnes’ snappy dialogue treads a clever line between cruel and kind – an Ayckbourn-esque comedy for the Uber generation.

Overwritten and perhaps a little overlong this play nevertheless has appeal and was directed by Alice Malin with assurance. David K. Barnes writes with originality, creating a contemporary feel for the disillusioned 30-somethings who have secured a university education, at some cost only to find their degree is not a magic passport to prosperity – life is more complex to navigate than was first imagined. Choices have to made and pole of promotion is greasier than expected.

Richard, played by Liam Bewley, is an emotionally trapped individual who likes order and fails to realise he is but a practical joke to many in the office. Even his ex wife only admires his integrity and cannot bear his lack of get up and go. Bewley captures a sense of obsession bordering on the compulsive with poignancy and honesty – ever the fall guy as he endeavours to rise above the vicious interchanges that ensue as Nick and Diane (earnestly played by EJ Martin) discover that Valarie turns out to be Nick’s old flame from university. At times the tension and anxieties felt slightly too anachronistic within the contrived party atmosphere, all of a sudden becoming charged before being disrupted rather obviously.

However, the comedy manages to win through as we laugh with a degree of scorn and disbelief at these self obsessed emotionally immature people, as they endure a party where there is increasing amounts of food but no nibbles, where the booze flowed and where relationships crackle and pop.