Review of: Barons Perchés at the Platform Theatre

For a play dedicated to investigating, seemingly, the consequences and implications of loneliness and seclusion, it was a shame that Barons Perchés never grew to be more adventurous

‘Physicality is a truthful language’. So said Amit Lahav, Artistic Director of Gecko, when interviewed a few months ago about the ideas behind Institute. If the London International Mime Festival were to have a mantra, in the ‘post-truth world’ of 2017, it’d perhaps be this. Barons Perchés, currently running at the (somehow apt, given the set) Platform Theatre in King’s Cross, is the epitome of this truth in physicality, resorting only to conversational gibberish or harsh cries whenever language is used.

Mathurin Bolze and Companie MPTA’s show has a genealogy to it, a grand narrative that extends beyond this individually parceled performance. Ten years ago the company constructed the idea of the Baron, based on a novella by Italo Calvino, a man rejecting normal terrain habits for the sake of living in treetop canvases. We return to the Baron, a lonely man residing in a wholly secluded space, yet now joined by another, identical figure (right the way down to the same moustache design), each of them colliding, bouncing, physically inhabiting the same stage.

Bolze and MPTA’s intentions in Barons Perchés here are exciting – developing, interrogating their earlier piece with this abstract return. The stage (and, as a result, the events of the show) are dominated by a trampoline, the launch-site for a variety of set pieces and physical segments. The relationship between the two performers varies throughout the 70 minute runtime and each individual segment – the two sometimes mimicking, working in tandem, while at other moments exist wholly in an antagonist, almost violent conflict. Are the two the same person, acting out different temporal experiences on top of each other – are they related perhaps, brothers maybe? Or, in a Jungian framework, are they almost shadows of one another, with each of these violent attacks or cooperative moments indicative of a tortured, lonely mind, oscillating between harmony and tempest. The show thrives on its own ambiguity – a marvellous feat. 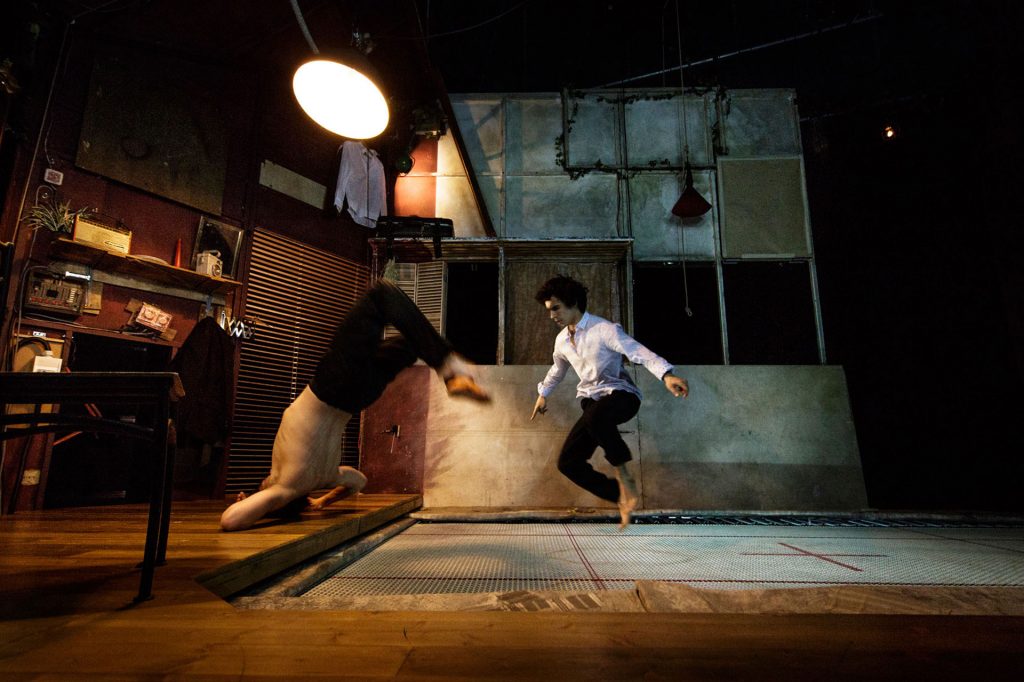 Nevertheless, the constant, inexorable sequencing did mean this conceptual ingenuity started to become stale around the 45 minute mark. The show’s segmentation and structure almost undermined the methodology – by conforming to an episodic idea the pacing became incredibly noticeable and, when elements stopped being enthralling, the desire for the performers to move on was palpable. Furthermore, some segments felt overly stretched out while others felt mercilessly cut off too soon, especially one moment where one of the performers bounces towards a lampshade, hand outstretched, aching to reach the bulb while, at the same time, the other performer, pulling a nearby rope, drags the lampshade higher and higher with each bounce, the light always entirely out of reach. The image of a faintly illuminated, outstretched hand, suspended mid-air in an almost warped reference to the Sistine was powerful, though fleeting.

This was a huge, extravagant construction of a performance, with set design from Goury almost akin to some giant bird cage, the pair of performers leaping from platforms and plucking paraphernalia from obscure locations. Almost a character in and of itself, with temperamental attitudes and hidden features, the investigation of the set was certainly an asset.

For a play dedicated to investigating, seemingly, the consequences and implications of loneliness and seclusion, it was a shame that Barons Perchés never grew to be more adventurous, and the hypnotic magic of the trampoline bouncing and choreography, for all its innovation, just needed something further to break from a subtly, underlying monotony. A canvas, perhaps, for reviewers and audiences to inject their own ideas, and as a result you certainly got as much from the show as you put into it. Something bold, and certainly something truthful – a signal of a fantastic Festival to come.