Despite its strange staging and framing, Underneath manages to create a captivating, affecting human story.

In the programmes and publicity material for Irish theatre company Fishamble’s latest production, there is very little information aside from the promise of exploring the hidden, forgotten sides of society and people. In the show’s first fifteen minutes, this initial vagueness gives way to a quasi-linear narrative of an Irish woman disfigured by a lightning strike, told in flashbacks by her corpse. Underneath is a startlingly personal production, a one-man show combining abstract dance theatre, narrative monologues, voiceovers, and audience interaction to wind a disconcerting yet captivating tale: a life lost to the shadows after an untimely accident. 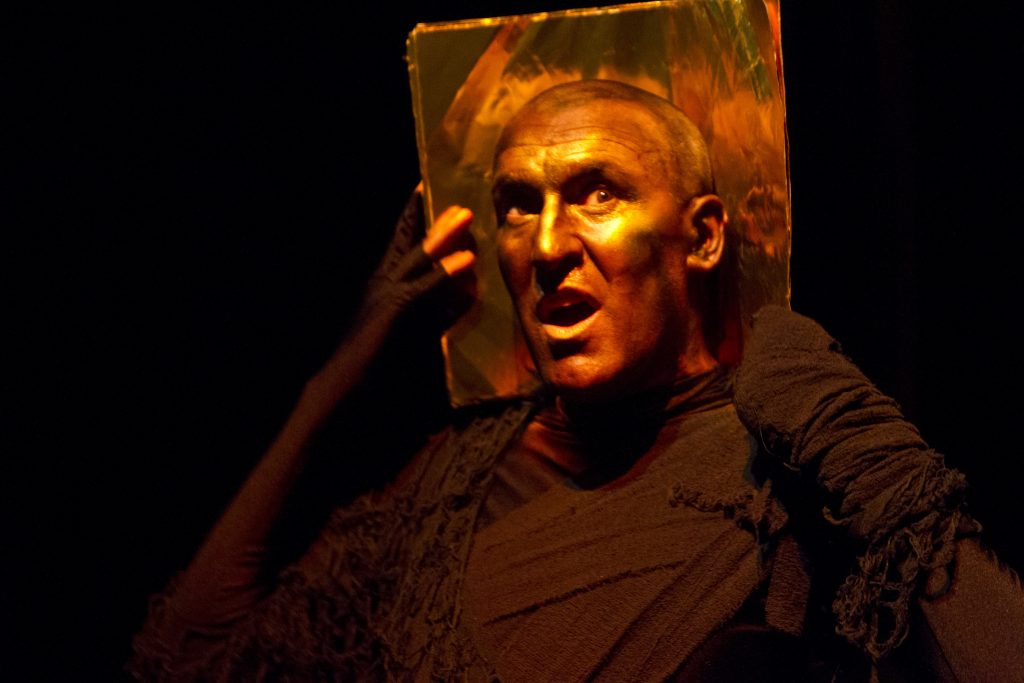 The narrating protagonist never explicitly gives away details, but soon a narrative emerges: her spirit, re-inhabiting her dead body, reaches out to the audience – sometimes by name – to welcome their rare visit and share her life story. As a child, a lighting strike permanently disfigured her face and temporarily inhibited her speech, rendering her the laughing stock of her school. After a friendship with a posh boy in secondary school turns sour, she sets off to find her own way in the world. However, as she says, ‘you never know what’s around the corner,’ and in some cases the past is far from dead.

This production, despite its incredibly odd premise and presentation, works. Writer and performer Pat Kinevane commits heart and soul to his various enactments, be they conversations with the audience, monologues, or interpretive dance. His dedication makes him somewhat implausibly believable as his (mostly) young female protagonist. His live words are the only one we hear save for voiceovers, giving narration to the scenes he enacts without speech and an acting partner in duologues. His utter involvement in his character and performance is captivating, and despite knowing early on that the ‘action’ is occurring in a pit next to some foxes, following her progression from country childhood to the Dublin dénouement pulls all focus.

On the other hand, the cognitive dissonance in seeing an able-bodied grown man, obviously painted a dusty black with a few haphazard streaks of gold, portraying the rotting corpse of a scarred middle-aged woman jars. Were it not for Kinevane’s dedication in performance, it would be laughable. The abstract performance style allows for several modes of expression and moods and enhances the unreality of the setting; however, it sometimes distracts from the narrative’s heart.

Despite its strange (and questionably effective) staging and framing, Underneath manages to create a captivating, affecting human story.

Underneath runs until 17th December at the Soho Theatre Upstairs. Performances are Tuesday-Saturday at 7pm, and tickets cost £12.50-17.50.

Written and Performed by Pat Kinevane