A playwright and a parricide meet onstage in a cage, in a metatheatrical sleigh-of-hand in a tango dance with the audience's disbelief.

Thebes Land is a dizzying, metatheatrical sleight-of-hand of a show – a postmodern Oedipus myth collapsing in on the weight of the popular and “high” culture representations of saints, sons and murderers that it draws upon – including its own creation. Thebesland follows T (Trevor White), a playwright who wants “to explore parricide in as non-performative a way as possible, to avoid fiction, to create a piece of documentary theatre”. To this end, his play will feature an actual parricide called Martin Santos onstage, in a cage resembling a basketball court. But what begins as documentary theatre slowly emerges instead as a live making-of documentary, where the subject is obscured more and more by signification, and the play itself is in a tango-dance with the audience’s disbelief. Martin Santos is featured on the cast list.

This makes this a difficult review to write – as so much of the play’s effect is bound in your own search for the truth within it. The playtext of Thebes Land contains a disclaimer, which states “please resist the temptation to keep on reading now… I promise you’ll enjoy the show much more if you don’t know what’s going to happen.” I would be tempted to say the same of this review. If you are using this review as a barometer for your interest, then don’t. If you haven’t seen this play, and intend to, then avoid any external material about it. Or don’t – because to what extent media coverage forms a metanarrative around the play’s own self-referential text is exactly the kind of question playwright Sergio Blanco (translated and adapted by director Daniel Goldman) toys with throughout in Thebes Land. 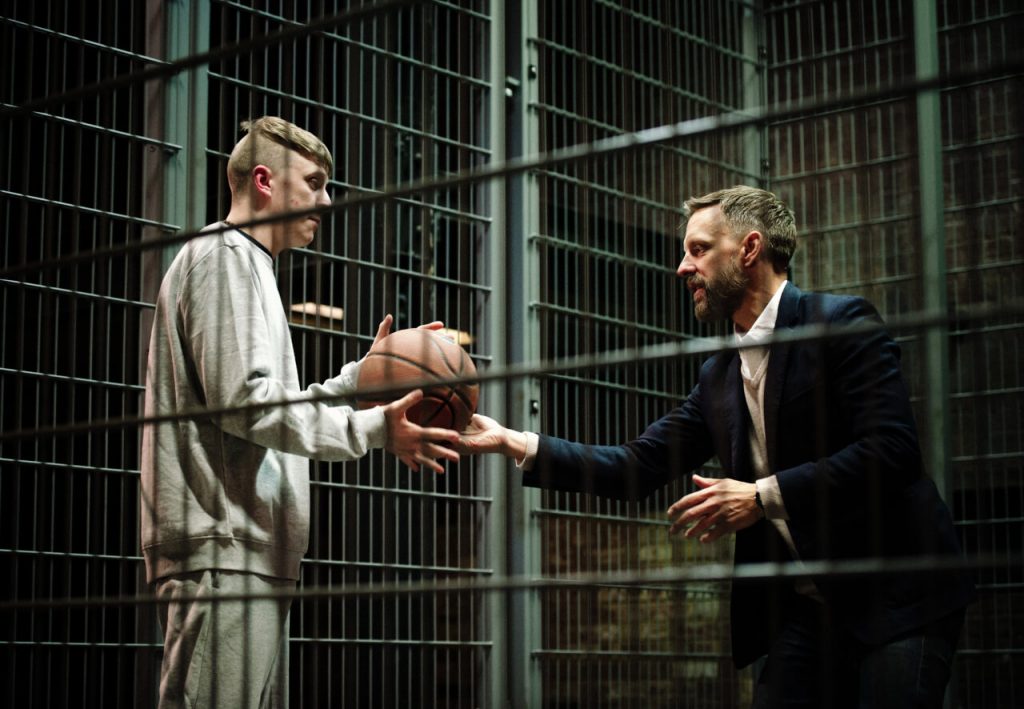 Even observing that this is a play in translation is a spoiler of sorts – although it opens new questions regarding our distance from the truth, and what difference it makes if it is the “genuine” playwright onstage or not. The only details playwright Blanco requires kept in translation are a section in French and a particular song – so is this even an authentic document of Blanco’s play? And what does that mean? Thebes Land pushes your definition and deference of authenticity to its limits.

Within the play’s logic, however, T is writing a play. We are watching that play – and we are told that Martin Santos, a parricide, is performing in that play. Then we are told that he is in the audience, and an actor called Freddie (Alex Austin) is onstage in his place. In Thebes Land, you quickly learn to suspect what you are merely told. We are audience to transcribed conversations between Martin and T, as well as glimpses into Freddie and T in rehearsal. But in both, T reiterates that he is constantly gathering material for his play – so when we watch these encounters what we see has already been mediated, passed through T’s artistic sensibilities, preoccupations and prejudices. At times, this can feel exploitative – but of whom?

This play would be incredibly dry without its two powerful performances. Trevor White as T is quietly fascinating, his performance founded on the principle that he is not performing. Alex Austin has an even greater task – playing Martin convincingly enough to invest the audience to the point where they believe they share a space with a parricide, before flipping and playing Freddie whilst still maintaining Martin’s authenticity (if not his documentary “truth”).

Frustratingly for a reviewer, Thebesland‘s self-generative structure (the play is being written by a character, as the play is being performed) effectively forecloses all criticism – as, in criticising the script, we merely criticise the character. Broadly, this is handled inventively and with wit by the playwright. However, the play repeatedly falls into a tired pattern where the playwright-character muses on some obscure external material, suggests he will include it in the play, and at that moment the material appears on the screens hanging above the stage. The first time this happens, you enjoy the author’s intelligent indulgence. Once this formula has been repeated in almost every “Freddie” scene, however, the charm begins to wear thin.

I highly recommend Thebesland, though not without reservations. It is an fascinating and engaging – although not always emotionally – labyrinth of a play.