Review of: King Lear at the Barbican

A minimal production allows masterful performances to shine in this classic Shakespeare tragedy. 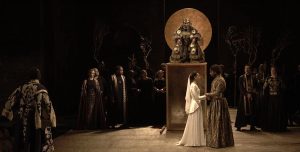 The Royal Shakespeare Company’s London programme this year includes a Shakespeare veteran tackling perhaps the most daunting role in the canon. As the ageing King Lear divides his kingdom between his three daughters, he cuts out his youngest after she refuses to ostentatiously profess her love for him. As the two older daughters begin a plot to take Lear’s remaining power and the Earl of Gloucester’s illegitimate son conspires against his father and half brother, Lear descends into madness. The classic tragedy is here shown in a stripped-down, unabridged version, where strong performances command a minimalist stage. While long and very traditionalist, it is a magnificent vision of the end of an era.

Sir Anthony Sher is a Shakespeare legend, having played roles from Richard III to Falstaff and now one of playwright’s most demanding characters.  Unsurprisingly, he is terrific. His Lear is a tempestuous ruler trapped in an ageing body, invoking the heavens to smite those who slightly offend him. His descend into powerlessness and madness is mesmerising and poignant. While Sher’s diction and phrasing is impeccable, he rarely varies the tone of his delivery, somewhat losing his intentions in the famous mad scenes.

The rest of the cast is uniformly excellent, and only standouts will be mentioned here. Nia Gwynne’s Goneril and Kelly Williams’s Regan form a strong double act as a unified front against their father, but they are each uniquely characterised and compelling in their own rights: Gwynne patient but prone to cracks of anger, Williams calculating and cold. As Cordelia, Natalie Simpson injects feisty and honest, loving her father while uncompromising on her integrity. Paapa Esseidou, as Edmund, maximised his character’s scene-stealing potential with a jovially malevolent portrayal of the bastard son seeking his fortune at whatever cost to those around him. Kent, played by Anthony Byrne, flows between fiery and gentle in a moving portrayal.

The production design of this King Lear creates a timeless, larger-than-life atmosphere. The set is bare save for props – including a massive throne on which Lear is carried. Live musicians are situated above either side of the stage, providing accompaniment for speeches and transitions as appropriate – this atmospheric choice may have been melodramatic if abused, but it is perfectly utilised for dramatic emphasis. Except in the storm scene, the lighting mostly holds at a constang level, allowing the performances to shine. Lastly, costumes were evocative of ancient Britain, but pared down to provide the actors freedom of movement and expression.

The storm scene and Gloucester’s blinding are the two major moments when the production broke out of its traditional, minimalist mould. The former featured rain created by ingenious lighting tricks as well as the usual thunder sounds and flashes; however, the laboured lifting of the stage’s gold cover to represent the windswept heath marred the atmosphere with its awkwardness. Gloucester’s blinding took place inside a clear box – a stark, bloody invention in a conservatively designed production.

On the whole, the production’s barren aesthetic on the Barbican’s massive stage creates an epic. Alongside the excellent performances, the world created is one of ancient traditions and unforgiving conditions. Indeed the only reason this three and a half hour run time is not only excusable but even appropriate was due to its grand scale and deliberateness.

Such a strong, dependable, well-done Shakespeare piece comes as a strong contrast to Emma Rice’s recent Globe season that, while no less good, was more willing to favour new ideas and framing devices over traditional stagings and readings. Perhaps the RSC, by being a bastion of ‘traditionalist’ productions, is providing a framework against other ‘experimental’ Shakespeare productions can be judged. As one would expect from such a renowned institution, the production was marvelous. That said, however, it felt constrained by its commitment to a grand, traditional approach. There may be a middle ground, which in my opinion was exemplified by many productions of Dromgoole’s Globe, that keeps the integrity and clarity of Shakespeare’s language while exploring different themes, characters, or settings. However, there is room enough in the theatrical world for all interpretations, provided that they are all – like this King Lear – engaging and well executed.

The RSC’s King Lear plays at the Barbican Centre until 23 December 2016. Tickets cost £10-75, with all seats in the house having clear or almost-clear views of the stage.   Evening performances (Monday-Saturday) are at 19.15, while matinées (select days) are at 13.30. Please see https://www.barbican.org.uk/theatre/event-detail.asp?ID=19608 for a full schedule.