Review of: The Tempest at the Print Room, Coronet

Produced by:
The Print Room at the Coronet

this Tempest, compared to its recent compatriots at other locations, was rendered unappealingly empty.

A variety of The Tempest adaptations have flooded our stages in recent years – Roger Allam and Colin Morgan gave the performance a dignified stab at the Globe, while the Oxford Playhouse hosted an anarchic kaleidoscope of a version last year, rampant with laughter and spectacle. More pressingly, of course, is Simon Russell Beale’s intricately woven technical masterpiece that is currently on in Stratford – all adaptations that bear little resemblance to the show running at the Coronet.

If, as the show’s blurb says, that ‘The Tempest is the world in two hours’, then this a dreary, desaturated world, one that only infrequently shimmers with brightness (apt, perhaps, for 2016). We enter to an empty stage, a hoop of thick, laid rope dominating the centre, bathed in light amongst a sea of darkness – the calm before the titular storm. The idea behind Lee Newby’s stark, empty design is an intriguing one – this is Shakespeare in its roughest and readiest – stripping the text to its roots, removing the technical wizardry.

However, such a concept can only function if the textual understanding and performances from every actor are consistently top notch – which, for this play, they unfortunately weren’t. Little of this felt like the fault of the performers – some scenes felt awkwardly interpreted and blocked, with the incredible talents of Kristin Winters in the role of Ariel, (capable of playing the drum and tin whistle simultaneously, no less) consistently inhibited by the fact Simon Usher’s interpretation of the character sees them as a static, aloof entity, haughty to a point of almost non-exertion. For a part that is meant to hold an audience and a stage, this inspiring choice felt largely unwelcome (again, little in part due to Winters’ talents). 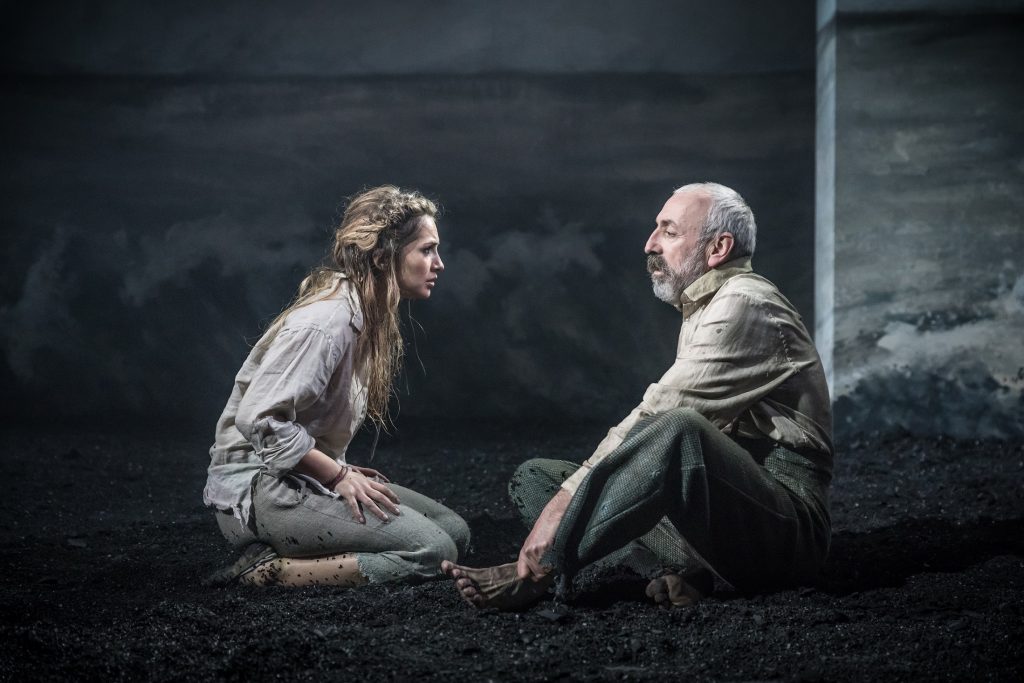 For some of the more corporeal parts the issues with character interpretation were no less prevalent – Kevin McMonagle’s Prospero, while pensively voyeuristic, never felt at ease with the part’s lengthy passages, often feeling as though more of a supporting role than the main figure of the show. If there is to be a standout, the emasculated cries of Billy Seymour’s Caliban were often scene-savers – particularly when it seemed as though all the humour was deliberately bled out of the infamous man-fish episode of Act 2 Scene 2. The sequence, perhaps one of Shakespeare’s comedic best, produced at best a ripple of titters from the audience.

The whole show continued this theme of being sucked dry, the wonder and intensity of the lines eschewed in favour of maintaining a mellowing, melancholic tone. We are never brought to like Prospero – keenly aware of the fact he physically whips and draws blood from his slave, and few of the other characters stir sympathy. Even the blossoming romance between Miranda and Ferdinand, (often played as a humorous exchange of first and novel love) felt overly forced.

The Print Room has produced some marvellous shows over the last year, and to go for a Shakespeare production is certainly a welcome choice. This is a versatile and unique venue with some creative talent behind it, talent that will no doubt go on to create some wonderful work in 2017. However, the limited colour palette (which, on other occasions, may well have become a bold statement) coupled with an un-energetic reading of some of Shakespeare’s most magical lines, meant that this Tempest, compared to its recent compatriots at other locations, was rendered unappealingly empty.