A slow-starting, sumptuous and sentimental production of one of Shakespeare's lesser-performed works, twinned with Much Ado About Nothing.

This sumptuous production of Love’s Labours Lost, set in tandem with Much Ado About Nothing and performed by the same cast, takes as its setting a prewar Edwardian England. Both productions have transferred from Stratford-upon-Avon, where they enjoyed warm reviews in 2014, for a limited West End run – having been seen at Chichester and on cinema screens in the meantime. However, the new setting of London’s Theatre Royal Haymarket does the potential staidness of this particular production no favours. For some, it will be a lightly entertaining piece of welcome escapism – for others, this drawing-room comedy (as it is rendered here) will be a theatrical hell, devoid of drama and lacking in diversity. 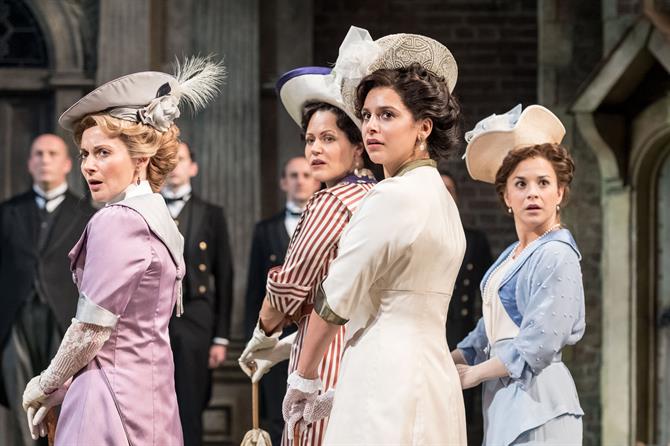 The setting of the two plays – on either side of the First World War – continues to be an apt choice, flavouring the finale with a satisfying uncertainty and darkness. The promise of the approach of war – whilst referenced almost too sparingly – yields the production a compelling final image, as the four merry lords stand stonily in uniformed anonymity. It is a cold closing scene for a production that has tried hard, and succeeded, to make these four ciphers distinct characters with unique personalities. But with their backs turned and dressed for war, they stand instead for the ghosts of history, and invite the audience’s imagination of what lies in store for the future.

Consequently, the play feels in waiting for its second part, and is certainly slow to start. Posing Love’s Labours Lost as the first half of a double bill reduces its already limited urgency, and its opening scenes suffer as a result. Whilst the first scene is scored with a slick, choreographed energy from the four lords, those that follow drag. Soaked in strings and drowned in Downton Abbey-style sentimentality, these scenes cannot hide that the first half of Love’s Labours Lost does little to inspire interest. For some slumbering members of the matinee audience, it was positively soporific.

The second half fares considerably better. Returning after a raucous pre-intermission rooftop scene, the actors acquitted themselves in doing their best with better material and a less drowsy audience. Holofernes (Steven Pacey) and Don Armado (John Hodgkinson) proved a surprisingly amusing double act in an opening scene appealing to the taste for ‘Allo ‘Allo!-esque comic cultural miscommunication. Even the normally-tedious Nine Worthies were entertaining, and introduced a much-needed hint of darkness with an affectingly absent-minded curate Nathaniel (John Arthur), which laid the foundation for the satisfying finale. 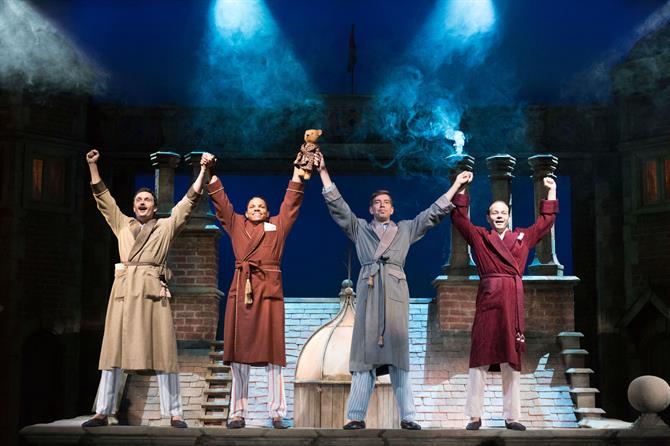 To give the actors their due, no single performance weakened the production, and all were solid. Don Armado and Moth (Peter McGovern) formed a likeable duo, and as Costard Nick Haverson’s body had a vibrant life of its own, recalling the flickering image of a silent clown of the silver screen. Similarly impressive was the precise, stylised physicality of the principle lords and ladies – however, this clipped and choreographed slickness occasionally led to rushed dialogue and lost language. Edward Bennett’s Berowne was initially a culprit, but came into his own during his long speeches on the rooftop and during the second half, where he displayed a consummate comic skill. Unfortunately, the four ladies of France were less unique than their male counterparts – a weakness of the script more than of the cast.

The set for both productions is a large scale replica of Charlecote Park, a National Trust property in Warwickshire. With Love’s Labours Lost, the Royal Shakespeare Company is in danger of becoming National Trust theatre – safe, and stuck in the past. The production will almost certainly be a popular success. But the stage is not a heritage site, and deserves braver work from one of its premier companies.