Review of: Hedda Gabler at the National Theatre

Produced by:
National Theatre, Supported by the Williams Charitable Trust

As becomes increasingly clear with more of Ivo Van Hove’s work (including his current Hedda Gabler at the National), this is a director who seems to play his performances as if they were a game of chess

As becomes increasingly clear with more of Ivo Van Hove’s work (including his current Hedda Gabler at the National), this is a director who seems to play his performances as if they were a game of chess – jostling the characters around, trying out different combinations before clinching a final, inevitable finale that seems so unstoppable that it becomes almost anti-climactic – as a master tactician would simply go through the motions during his final moves. It was the case in his View when it received overwhelmingly positive reception – a blood soaked torrent of water saw a rapid finish to Eddie’s decline in what had previously been a slow, skulking build-up.

The same is true here (and pardon for the smallest hint of spoilers, perhaps skip this paragraph) – Ruth Wilson’s Hedda reaches her eventual end with a sudden, shocking certainty – van Hove laying all the foundations and simply letting the ball roll for itself. It’s a meticulous, tested method, and one few directors are capable of, but it means that, to a certain extent, the real thrill for the performance comes in the middle, in the wake of the second act, when the characters perform their final shuffle before settling into a final position.

What characters these are too – each taking Ibsen’s original series of bureaucrats and academics and adding crises of modernity and vigour. A lot of this is aided by An D’Huy’s subtly marvellous costumes –  Blazer / jean combos are all the rage for the men, while Wilson’s loose, peach dress floats with a shimmering immateriality. In fact, the subtlest star here is Jan Versweyveld’s set – a neo-Bohemian whitewash of liminality, an apartment unfurnished yet entirely inhabited, where the characters constantly exist either at dusk or daybreak. Silhouettes are key here – the vertical blinds of the stage right window shimmer as if faint prison bars, showing Hedda’s apparent captivity, while at one point Wilson pulls out her dress, leaving a faint echo of an expectant mother on the wall behind her – nothing short of visionary. 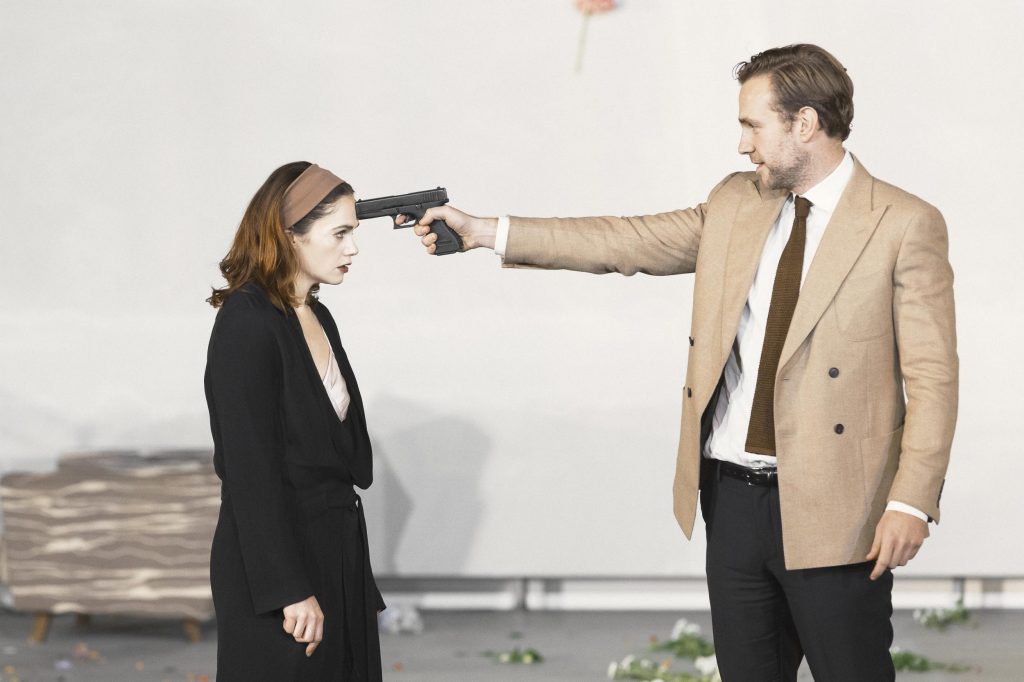 Patrick Marber has certainly tackled Ibsen’s work satisfyingly – renovating, embellishing and stripping where necessary. Few lines feel anachronistic in this modern version, and for the most part the cast carry a natural poise throughout. Wilson seems to revel in her part, receding and emerging like some form of tide, showing Gabler’s distinct, personal conflict as well as her eventual heartbreak as, on the midst of an incredibly internalised success, has her ambitions snatched away. The complexities of the piece could not feel more distinct at certain moments. While Rafe Spall’s hulking Brack performs serviceably, Chukwudi Iwuji fulfils Luvborg’s reputation in spades – a character that, so lauded before he even arrives, can easily feel underwhelming. Thankfully this was not the case.

With Peter Pan soaring across the Olivier and Love providing a performance worlds away from Gabler, the true variety and versatility of the National is as distinct as ever. Any of these shows is well worth watching – a hopeful sign for the year to come.

Hedda Gabler will also be running on NTLive on 9th March