Review of: Hamlet at the Trafalgar Studios

Obviously with a cast of six, at a running time of 90 minutes straight through, this is not going to be a Hamlet for the Folio pedants

Obviously with a cast of six, at a running time of 90 minutes straight through, this is not going to be one for the Folio pedants. There is wholesale re-ordering, reallocation and compression of text, but anyone fearing a dumbed-down greatest hits cut can stop worrying. It’s visceral, stylistically intoxicating, and a world away from cosy singalongabard. It nails its colours firmly to a psychiatric mast, and inverts all the old certainties of the script, while retaining a central essence of the play which many have attempted and few have achieved.

Director Kelly Hunter previously ran Touchstone Shakespeare Theatre, carrying productions to young audiences who normally see no art. Her 2014 RSC production of the Tempest, with Greg Hicks as Caliban, famously involved severely autistic participant audiences, and travelled from Ohio to Spain, with change of language en route, and will re-surface in 2017 in Catalan.  So, she fully engages with an artistic duty to break down barriers for audiences, but not at the cost of over-simplification. She worries relentlessly at her chosen bone: she traces this production back to an 80 minute version in 2012. Significantly, she then went back the following year to the material she’d previously cut, and this adaptation shines with the relentless care and attention to detail which that process entailed. 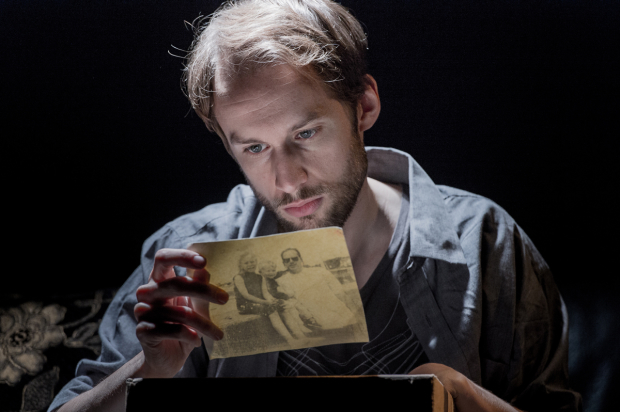 From the very opening, we simultaneously watch Hamlet’s agony, and see everyone else through his tortured eyes, and are baffled as to whom we may trust.  Is Claudius just much misunderstood? Is Gertrude an innocent abroad or a toxic mommy? Before we can be defeated by that enigma, a series of textual adjustments and stylistic changes of shade concentrate our minds back on a new essential which is; not the moral duty of a renaissance philosopher prince, but the debilitating fury of intense grief, and the incapability of self-absorbed outsiders to understand it. The effect is startlingly fresh: great set pieces instil genuine anxiety in the audience and lines (whether frequently cut or done to death) resonate completely anew. The one short-odds bet is that this Hamlet will kill someone. Ophelia’s descent into madness (a point at which many recently lauded productions look half-hearted in comparison) here marks not a digression but a change of gear in the play as a whole, becoming more obviously expressionistic, and delivering the final butcher’s bill as a real vision of horror, churned out by a thundering millwheel of shattered perceptions.

Very rarely one might wonder whether some of the other characters are a shade too diminished in the bid to serve the central purpose but of course, it’s not their drama. One or two small decisions made in the process of fitting this production into so intimate a space might be re-visited. But not one decision has been made for pale effect only, every particle of every performance is a true-to-purpose tour de force, (to say nothing of frightening levels of physical commitment) and one cannot walk out of the studio unmoved.