Review of: Gatsby at the Leicester Square Theatre

Produced by:
Ruby in the Dust

While uneven scoring and pacing – combined with the odd characterisation of Daisy Buchanan – drag the production down,Gatsby is still a gorgeous, glamorous extravangza and a lively, delightful night of theatre

The downstairs Lounge at the Leicester Square Theatre transforms perfectly into he fictional 1920s speakeasy Luna Park, with a bar in the corner and cabaret-style tables ringing the small stage. Immersion into the era is immediate, supported by biographical information about F. Scott Fitzgerald and his wife Zelda (including her descent into schizophrenia and confinement in a sanitarium) prominently placed in the programme and the actors interacting with the audience as jazz bar musicians and an emcee. Amidst these happenings, Daisy Buchanan’s arrival and search for a man named Gatsby sets the show in motion. A flashback sequence covering the entire novel opens, seen through Daisy’s and Nick’s alternating viewpoints. At its conclusion, it is revealed that Daisy has suffered Zelda’s fate of madness and incarceration, from which she briefly escaped to Luna Park to relive her glory days.

The ‘enormous vitality’ with which Fitzgerald endows Myrtle Wilson permeates the whole production. With its intrigue, romance, and tragedy, Gatsby’s story is excellently suited for a musical retelling. The conceit brings the audience into Gatsby’s nostalgic, idealised vision – one shattered when Tom arrives to take Daisy back to the sanitarium. The lighting is excellent, blending realism and fantasy. Some songs are better placed and made more dramatic sense than others, and the first half is rather slow and aimless in comparison to the snappy, engaging second. However, the music aptly evokes the era, and while the familiar story may not find its feet until the dramatic conflict begins, the jazz age atmosphere keeps the audiences’ attention.

While all performances are engaging and well characterised, the three supporting women – Ellen Francis (Jordan Baker), Lauren Chinery (Myrtle Wilson), and Lowri Amies (Catherine / Reporter) – are standouts due to their energetic, intelligent, wholehearted portrayals. Bradley Clarkson switches effortlessly between a threatening Tom Buchanan and a quietly observing Meyer Wolfshiem, and Ludovic Hughes is suave enough to manage the title character. 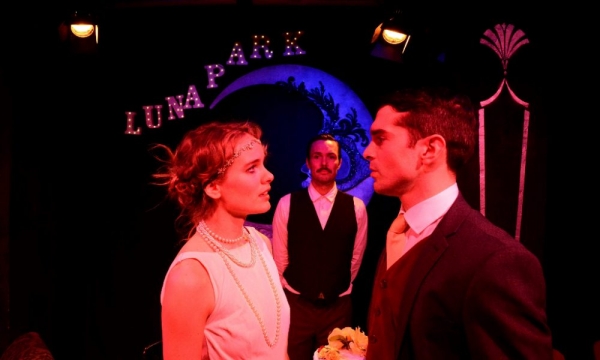 As the story is framed through Daisy’s perspective, it is especially regrettable that the treatment and portrayal of her character jars. Here, Daisy-as-Zelda (played by Cressida Bonas) seems caught up in the forces of the plot, married and moneyed against her will and brokenhearted by Gatsby’s disappearance and death. While a retelling where Daisy does not reconcile with Tom is an interesting interpretation, the story’s usual central tragedy – Gatsby’s blind, vain attempts to get his old life and old girl back – are lessened. Turning the tragedy on Daisy does not convey the same poingnancy. And although the character is often described as childish in manner (at least in the public sphere), conveying such childlikeness (and lunacy) through flailing arms and one-note nervousness does not land. Unfortunately, Bonas has the weakest American accent of the group and speaks far too quickly for a true Louisville lady, which may have added to the character’s grating quality.

While uneven scoring and pacing – combined with the odd characterisation of Daisy Buchanan – drag the production down, these are only slight hindrances; Gatsby is still a gorgeous, glamorous extravangza and a lively, delightful night of theatre.  If one fancies a night of 1920s gossip and glitter, it is the perfect treat.

Gatsby runs at the Leicester Square Theatre’s Lounge until 23rd December.  Performances are Tuesday-Saturday at 7pm, with Saturday and Sunday matinées at 3pm.  Tickets cost £25 for standard seating (£20 concessions) and £32 for a seat at a cabaret-style table.

Cast (in order of appearance):