Review of: The Flanagan Collective's 'A Christmas Carol' at the Arts Theatre

Produced by:
The Flanagan Collective and Hartshorn-Hook Productions

Overflowing with an abundance of festive cheer and interactive fun, The Flanagan Collective's 'A Christmas Carol' wholeheartedly proves that the Christmas spirit is alive and well.

It has been almost a hundred and seventy-three years since the publication of Charles Dickens’s seminal story A Christmas Carol. The journey of the miserly Ebenezer Scrooge and his redemption on Christmas Eve has had a tremendous cultural impact, spawning countless adaptations including Scrooged, The Muppet Christmas Carol, Mickey’s Christmas Carol, A Christmas Carol: The Movie, A Christmas Carol: The Musical, and that one with Ross Kemp. Many revere Dickens as being the ‘inventor’ or the ‘father’ of Christmas — he is even credited with coining the term “merry Christmas” itself. Therefore, it should be considered a daunting task to attempt a production which truly captures the jovial essence of A Christmas Carol, and fortunately, The Flanagan Collective does just that. 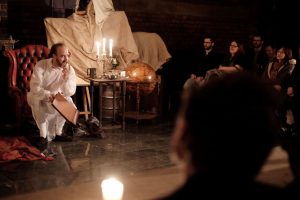 The plot of this adaptation does not stray very far from the original text: the surly Ebenezer Scrooge is incredibly wealthy, but lacks joy and compassion; the ghost of Jacob Marley visits him on Christmas Eve to warn him that if he does not change his ways, he is doomed to misery in the afterlife; and a journey of self-discovery ensues. It is a tale so familiar to our collective consciousness, despite the fact that many of us have never read Dickens’s book, myself included. What The Flanagan Collective does so well, however, is to remain loyal to Dickens’s source material in its overarching narrative, while slightly altering the manner in which Scrooge gains his new-found appreciation of the Christmas spirit, thereby bringing some measure of originality to the material. Firstly, the Ghosts of Christmas Past, Present and Future are removed, and replaced solely by Jacob Marley (played by Jack Whitam), for whom Scrooge’s fate becomes an almost filial obsession, and which adds an invigorating push of personal motive into each stage of Ebenezer’s journey. Secondly, Scrooge’s adventures through Christmas Present does not include a frolic through the houses of his relatives and colleagues, but in fact becomes a dinner party for the audience to enjoy midway through the performance.

Surely, the evening’s festivities could not have passed as successfully, were it not for the sumptuous dinner provided by Danny Jack at The Humble Kitchen, apparently paid for at the begrudging expense of Mr. Scrooge himself. A large portion of the production consisted of this feast, but the mood remained jovial, as members of the audience were encouraged to talk to each other over savoury pies, roast potatoes and cheese boards; participate in a variety of parlour games and songs; and teach Scrooge the true delights of Christmas, including family, charity — and painful Christmas cracker jokes. Throughout dinner there was no lull in pace or characterisation, as both Al Barclay as Scrooge and Whitam maintain their respective curmudgeonly and raucous performances throughout many hilarious improvisational moments. 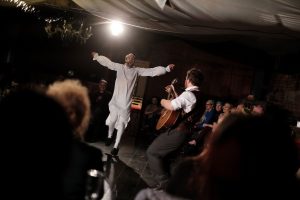 As a double act, Barclay and Whitam are a delight, as neither allows the bolder aspects of their characters’ personas to outshine their co-star. Ricocheting from high pitched giggles and unhinged screams, Whitam balances on a knife’s edge between concerned colleague and psychotic spirit, and due to his prolonged stage presence creates an intriguing dynamic between Marley and his former partner. Barclay, presenting a younger Scrooge than typically seen in previous adaptations, is wonderful as a cantankerous man-child, unsure and unwilling to embrace change. This is particularly true when he is given the opportunity to improvise; even when Barclay breaks character to laugh or make a contextual comment on the evening’s proceedings, this does not ruin the established mood, but rather suggests that Scrooge’s pernicious guard is gradually melting away to reveal the kind-hearted nature underneath. Together they are overwhelmed by the happiness that the evening brings, and it is an added pleasure to be a part of this communal cheer.

During the yuletide season, theatres across the land are often filled with carbon-copy productions of Charles Dickens’s revered tale. Therefore, it is such a delight to see a show that takes his work and creates something that captures the essence of his message in a refreshing way. The Flanagan Collective’s A Christmas Carol is a perfect way to begin the holidays, as they know how to keep Christmas well, if any production company possesses the knowledge.

The Flanagan Collective’s A Christmas Carol will be continuing its run at the Arts Theatre until Saturday 31st December at 7.30pm, with Saturday matinee performances at 4.30pm, and no shows on Sundays.

There is no allocated seating for this production, and no level access.

This year The Flanagan Collective are collective donations on behalf of The Big Issue Foundation at the end of each performance.