Despite starting with a platform of strong ideas, the show presented work that felt unfinished, lacked narrative and seemed self indulgent, ultimately leaving the udience isolated and unsympathetic to the collective's message.

The latest offering from Marisa Carnesky, performance artist, academic, and self-styled Showwoman, Dr Carnesky’s Incredible Bleeding Woman was co-created by eight performers who make up ‘The Menstruants’, a collective formed to explore and create cultural rituals in celebration and reclaimation of menstruation. Taking a staged lecture format, structured around sequential performance art scenes, some of which are cut or run simultaneously with video, the performance pieces cover a wide spectrum of cabaret talent and genres, from MisSa Blue’s sword swallowing to Fancy Chance’s hair hanging.

As a reviewer, the central ideas of a show are always important, but your role is to consider the performance first and foremost, to evaluate the piece of theatre as an experience. A production can be a shining example of great acting or writing, without necessarily confronting difficult issues. No matter how well intentioned something is, or how important its message, there is a certain level of production value that an audience can reasonably expect, and this is where Dr Carnesky’s Incredible Bleeding Woman falls down. 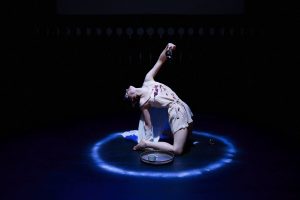 I deeply wanted to love this show; I believe strongly in the fight against the marginalisation and malignment of women, and have been so pleased to witness the confrontation of misogyny and misunderstanding through powerful (especially female-created) theatre. Yet, despite starting on a shared platform of ideas, the show presented work that felt unfinished, lacked narrative and seemed self indulgent, ultimately leaving me isolated and unempathetic with the collective’s ideas.

To start with the good, both Fancy Chance’s solo art performance and visually arresting hair hanging finale cannot be faulted; her work always has a clear central message or idea, and a strong narrative to bring the audience past the barrier of her silence into an unforgettable shared experience. Without words, I still felt that I understood what she was communicating, which for me is one of the strongest barometers of good performance art. Equally, the decision to bring Menstruant H Plewis’ young baby onto the stage perfectly heightened the emotional power of her scene, and brought a real clarity to that part of the show. In contrast, many of the other performers’ pieces had no direction, characterization or story – it was clear that the artists had gone on a journey of discovery and thought in order to formulate their work, but they needed a lot of further development, input from choreographers, directors, and other forms of critical feedback, in order to present a good show.

The show also suffered from a lot of technical issues. With attentions already wandering during the more inaccessible and isolating moments of work, props broke, tech cut out or artists were badly lit, unable to find their spot. The sound levels were inconsistent and didn’t reach the audience well. The clever and atmospheric design of the show, both aesthetically and technically, was really let down by this execution, and contributed to the overall impression of incomplete work.

When Carnesky’s lecture notes go up in a flash of fire, even this manages to be boring and questionable, happening in the middle of a sentence rather than to signal the end of her lecture, and with no context or connection to her speech – this moment is emblematic of one of the central issues with this show, that it feels like the performers are trying to shoehorn in show elements or skills without properly establishing how they are contributing or pushing forward the moral message of the show. Staring meaningfully at the audience does not automatically impart meaning on what you are doing.

The piece that Marisa Carneksy and the Mentruants contributed to in The Guardian made me so excited to see this work. They, along with their menstrual activist group The Menstronauts and The Radical Anthropology Group are confronting some hugely important subjects; menstrual taboos, the sidelining of women, and the reclaimation of something we should absolutely never be ashamed of. And yet, in Dr Carnesky’s Incredible Bleeding Woman there isn’t enough structure to pull these ideas together into a coherent manifesto; it’s undoubtedly political but there are too many separate voices, expressed in unclear ways. As such, this show might feel more suited to a non-theatre setting, where its constituent parts can be separated into self contained acts, spread around a space so that audience can interact with the work more directly.

Dr Carnesky’s Incredible Bleeding Woman will be continuing its run at the Soho Theatre until Saturday 7 January. Tickets can be purchased online or from their Box Office. You can find out more about their activist group The Menstronauts here.