I have a secret ambition – and I’m sure there are many Londoners who feel the same – to run away and join the circus. Why the big top still holds such a romantic fascination when its prominence as a universal populist entertainment has been on the wane for years is beyond me. I was not raised at the side of the ring, and you are just as likely to see “circus” acts such as clowns, acrobats and even jugglers in the theatre as in the big top. True, circus has seen a massive resurgence in recent years – with La Soiree returning year after year to wow the Southbank – but as a cultural curiosity rather than a generation’s formative entertainment. In the case of “entertainment company” Cirque Du Soleil, it is blockbuster business. But for me growing up, it was easier to see the circus in Disney films than it was in real life.

In such a climate, we should be thankful for companies which bring the emphasis back to the live, communal experience of circus. Enter NoFit State Circus, who are bringing their show Bianco back to London for the first time since 2013. Whilst I saw Bianco over two years ago at the Edinburgh Fringe, what will be playing outside the Southbank Centre until the 22nd January might be unrecognisable – the show shifting with the personalities and skills of its rotating company of performers. What won’t have changed is the company’s commitment to creating an all-consuming communal event. At Bianco, the traditional boundaries of ringside and ring disappear, with the action taking place in front, above and around the audience.

But when I was offered the chance to join NoFit State Circus for the day, I didn’t hesitate. With an eclectic group of bloggers and journalists (including one representing a health and safety magazine), I was going to get closer to the action than ever before. 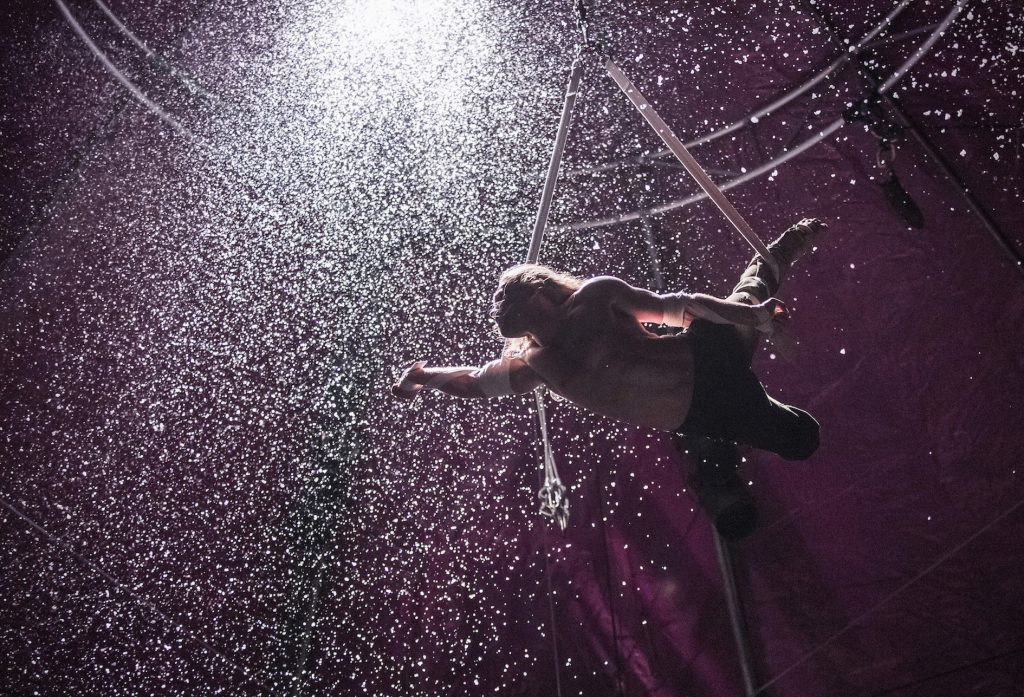 Not the writer. A scene from Bianco by NoFit State Circus. Photo Credit: Tristram Kenton

Now, although I dream of joining a circus, I am by no means a daredevil. In fact, I have a terror for heights. Jumping off a climbing frame takes serious thought and preparation. I can get dizzy on a trampoline. So, when we were told that we were going to be doing counterweights – and that I was to be the first to be flying in the air – my persona of the tenacious, investigative journalist (as I fancied myself) went out the window. I cowered behind two press officers from the Southbank. But it was too late – I had already been tricked into a harness.

Counterweight – currently a theatrical trend, with its spectacular use in the Globe’s Imogen among others – is essentially attaching yourself on a giant pulley to your partner. You go up, they come down. And vice versa. It helps if you are paired with someone of a similar weight.

I was first up as the flyer. Coaxed by NoFit State’s ever-patient rigger Topher Dagg, I gradually began to trust my harness and allow myself to be winched into the air – with all the grace of the sandbag, previously tethered to my partner, that I had replaced. If I was an aerial act, I would describe my style as “rigor mortis” or “rabbit in headlights”. But with practice I did let go of my rope, and certainly climbed higher than I ever would have if I had been in control. I found that that was the trick – knowing there was nothing you could do – and that, as long as you trusted someone else more than you trusted yourself, you would be fine.

Swapping to the other side, as the anchor, was a completely different case. Whilst my partner (the aforementioned health and safety journalist) was themselves on the light side, I knew I would struggle to leverage anything with my waif-like weight. Climbing up and down the ladders which serve as pillars for the tent itself, I discovered that getting up is easy. What’s harder is coming down – as it requires you to pull downwards, towards a gravity which no longer seems to work the way you remember. If you let go, you’ll shoot back up to where you started, headfirst – with your partner falling the opposite way.

This is why were made to sign a health and safety disclaimer.

In the end, it took Topher to pull both myself down to earth and my partner into the air. Afterwards, I had to be prised off that ladder.

“I assume you don’t want to go any higher?”

You assume correct, my friend. But I do regret not spending longer being lifted – and getting pictures to prove it (surprise surprise, that picture above is not me). But it was time to move on – to juggling, where I had more success. After all, this waif has been to clown camp. I know how to juggle. And being called “solid” by NoFit State’s parkour and juggling expert Lee Tinnion more than made up for my shocking display as a counterweight – that’s something for the old CV.

Whilst I wasn’t raised on circus, that certainly isn’t true for cast member and hula-hoop mentor Blaze Tarsha. She first toured with NoFit State Circus whilst her mother worked as the company’s permanent chef, and then joined the company as a performer after training at Circomedia in Bristol. Hearing of this, after some disastrous hula-hooping where more of the hoops flew frisbee-like from my body than spun around it, I realised that if you want a career in circus a couple of hours on a Tuesday afternoon might not cut it. And as my final hoop clattered to the floor, our time with NoFit State was over.

Unfortunately, I may not be destined to perform death-defying stunts any time soon. Some things are best left to the experts. But watching NoFit State Circus perform their warm, gasp-inducing magic might just be the next best thing.

Tickets for Bianco at the Southbank Centre are available here.