Review of: Bianco at the Southbank Centre

Bianco is a raw, fresh and passionate circus performance, which weaves emotional turbulence and witty interlude through stunning visuals and rumbling live music.

The Southbank Wonderground has for the last few years developed quite a knack for showcasing gorgeously innovative, and often bawdy, spectacle. Bianco, performed by NoFit State Circus, is a find even for them; I was unprepared for how extraordinarily raw, fresh and passionate a circus performance could be. 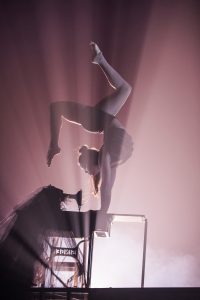 Bianco takes place in The Big Top, a domed tent in the Wonderground – bicycles, old prams and large climbing structures on wheels are scattered around the large interior. While the audience is free to wander and explore before the show, there was no milling when it had started; this is immersive performance, and the set is live. Between every sequence stewards appear from nowhere, furiously directing you away from ropes and pulleys snaking across the floor. For the safety of the performers, no photos.

There is a giddiness associated with circus, a remembered wonder from childhood that can be reconjured by a talented artistic director, and Tom Rack is a master. The frantic instructions of the stewards, the rumble of the live music, the cries of the performers as they run through the crowds with curious and curiouser props; every element is designed to ‘rekindle the innocence that makes the audience marvel,’ in director Firenza Guidi’s own words.

Classic circus tropes have been reimagined here with new wit and heart; I fell again and again for the charming tipsy juggler, the shy slackline walker doing backflips and pulling off his trousers, the sensual aerial dancer tumbling through a hanging bedsheet. Every act is curated to perfection, with atmosphere defining music. The costumes were particularly beautiful – much of the show is in the air, and the billowing skirts and glittering tassels chosen were mesmerising. 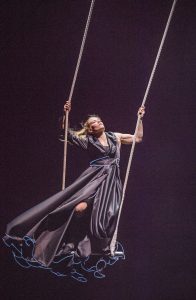 While I’ve seen plenty of cheeky, lively acts of the sort, Bianco is the first to really tap into a more poetic narrative, that draws you intimately in the performance. Acts that would have been only impressive are transformed into emotional metaphors, with the additions of spoken poetry, ghostly choir and exaggerated, prolonged motifs. Through the endless climbings and fallings of aerial movement, Bianco presents us with struggle and torment, as well as laughter and delight.

At times, the acrobatics themselves could have been tighter – there was a fair amount of dropping clubs and wobbly tricks – but as the show is so raucous, they get away with it. That, and they make fun of each other throughout, so it all feels like a private joke that you’re part of; you applaud all the louder when they get it right.

Not a show for those who tire of standing, or are too stressed by moving through crowds to relax. If you can let go, and join the magic, you’ll have the evening of a lifetime.

Bianco will be running at the Southbank through to the 22nd January; you can book tickets here: https://www.southbankcentre.co.uk