Review of: Where Do Little Birds Go?

This Edinburgh Fringe favourite is a remarkable, warmly human performance discussing the dark sides of London in the 1960s 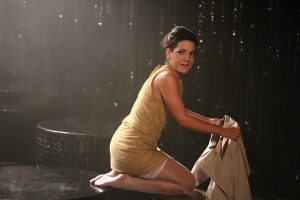 The Old Red Lion Theatre in Angel, a hub of new writing, is currently host to a 2015 Edinburgh Fringe favourite whose plot is lifted from real events. Lucy Fuller – the pseudonym gives to a Lisa Prescott-like character in this production – arrives from Hastings bright eyed and ready to make her name in the big city, where she moves from bartender to nightclub hostess (at the recommendation of Reggie Kray no less) in her quest to be a West End Star. Circumstances soon force her to take on ‘afters’ when the club closes each night; despite this, however, she is still positive about her life and experiences. Reggie Kray turns up again with the offer of a rich client, who turns out to be the escaped ‘Axe Madman’ Frank Mitchell. As the singing showgirl wannabe forms an uneasy relationship with the convict, she continues to fight for her goals and agency as the conclusion reaches its peak.

The show deals with some difficult topics – sexual exploitation, violence, and gangland threat. These are neither dealt with lightly nor voyeuristically. Lucy approached her observation, employment, and duties – voluntary and less so – honestly and bluntly, but past her first starry-eyed encounter with London there is no glamour in the proceedings. While not skirting the issues at hand, the depictions and discussions are well-done and tasteful, avoiding further exploitation.

Jessica Butcher is luminous as Lucy. Her enthusiasm at the start is boundless, and even as her character undergoes kidnapping and prostitution she finds the humanity in herself and those around her, ending with a keen awareness of her tragedy but a refusal to let it break her. She commands the space with joy and ease, conveying her story with honesty and gentleness to herself and her characters – even the infamous gangsters. A simple set and minimal effects allows Lucy to tell her story in her own words and way, keeping the focus on her and her experiences. The music in particular was innovatively designed, providing creating atmosphere where words would fail.

Although the eventual climatic twist – the kidnapping by the Krays – is known from the play’s opening through Lucy’s statements and the programme’s notes, the plot unfolds in such a way to give the audience Lucy’s mental and physical progression throughout her innocence and experience in London. This fully fleshes out Lucy’s motivations, dreams, and personality, allowing her to show a rounded character to the audience and immediately earning trust and sympathy.

The storytelling is largely linear, with some exceptions in the opening as Lucy skips from the Blind Beggar pub to Hastings and back again with only her stream of consciousness connecting these escapades. This choice, while mildly confusing until the whole picture is revealed, create an authentic, informal tone, as if Lucy is merely speaking to an intimate group of friends. This effectively creates camaraderie and involvement between character and audience, adding to the sympathy and trust mentioned above.

A warmly human performance discussing the dark sides of London in the 1960s, Where Do Little Birds Go? is a remarkable, highly recommended piece of theatre.

Where Do Little Birds Go? plays at the Old Red Lion Theatre until 26th November. Shows are at 8pm Tuesdays through Saturdays and 3.30pm Saturdays and Sundays. Tickets – available from the venue’s website – cost £15 (£12.50 for concessions).