Review of: The Red Barn at the National Theatre

An opportunity squandered perhaps, but an exciting experience nonetheless. The Red Barn is the sort of show the National relishes – star calibre with an intriguing plot. Ticking the boxes for a night of entertainment, but little beyond this.

David Hare’s latest, The Red Barn (adapted from the novel by George Simenon) is a play that yearns to be cinematic. Sliding apertures, each capable of travelling  the length and height of the stage, obscure the audience’s perceptions at various intervals, narrowing down on key details or creating an intense, claustrophobic context. It’s almost reminiscent of the cinematography of the incredible new TV adaptation of the Coen Brother’s Fargo, narrowing, shifting the frame across the screen, as though the monitor and the content are in some way disconnected. Certainly innovative, but this constant fluctuation did lead to some issues, as will be discussed further below.

Hare’s work is, for the most part, as fluid and punchy as a Hare script always is, delivered by a magnificent cast. Mark Strong, still riding the critical acclaim-wave of van Hove’s View from the Bridge, makes the emotional and mental turmoil of the central Donald Dodd an effortless symptom of a tortured man, capable of stepping into a supporting role for his co-stars whenever necessary. Elizabeth Debicki, a sure-fire rising star after some superb turns in The Night Manager and, before, that, The Great Gatsby (roped also into the Marvel fold with a turn in the Guardians of the Galaxy sequel, the programme notes) carries herself with some haughty, elusive composure, a constant source of intrigue. The quiet backbone of the show comes for the most part from Hope Davis – a character consistently analysed, debated and insulted, yet always pressing on, motivations always questioned yet rarely stated. 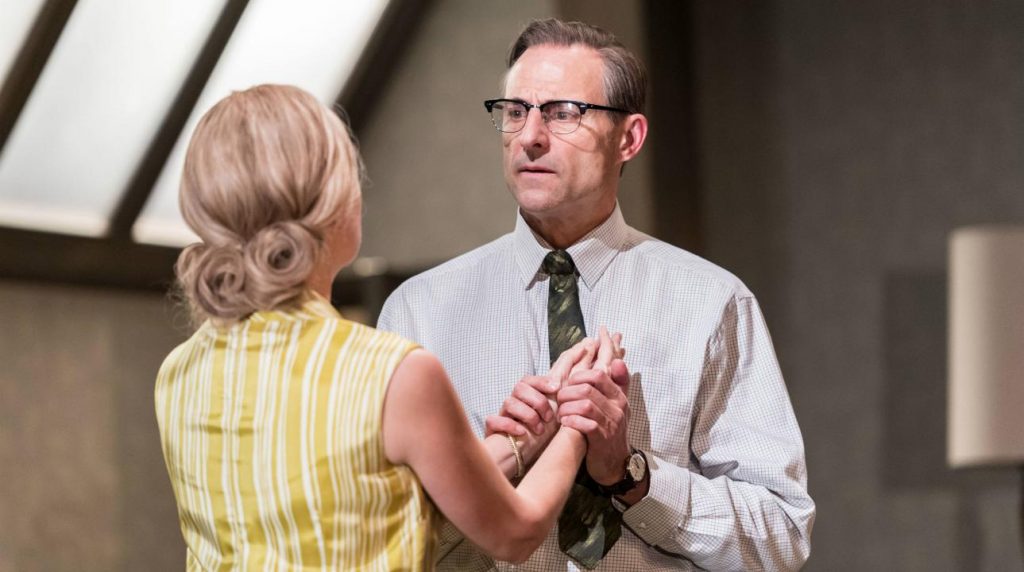 A shame, therefore, that Hare has the occasional fumble in his transformation of Simenon’s work. The casual mention of Dodd’s older brother, pigeonholed into a conversation with his father, feels intensely overworked and out of place, never before mentioned (and never again). The show’s ending, while thrilling, almost felt like a leap too far – as if something went unsaid. The dark irony of one of the character’s fate was, with every pun intended, eye-opening – this was a tale driven by the narrative; the darker subtexts that bubbled below simply the effects of it. Despite Hare’s insistence to the contrary, it was evident just how underdeveloped some of the female characters felt – passed off as enigmas or elusive may provide exciting developments for the plot, but not for sculpting real human beings.

Icke’s vision for the show was one of an intense thriller, perhaps akin almost to a Tarantino-placed snowstorm. The initial momentum of this vision melted away with the winter snow, leaving something with a more significant dip in energy in its wake. A symptom of the text, perhaps, but rarely remedied in execution.

The real winner is, of course, the tech – a mammoth effort that once again highlights the creative flexibility of the Lyttelton stage.  Bunny Christie’s design is vivaciously thorough – all of Dodd’s life, every room he frequents, is packed out with details from the Johnny Walker Whiskey through to the family portrait hanging above the crackling fireplace. This wasn’t just set design, it was world building.

An opportunity squandered perhaps, but an exciting experience nonetheless. The Red Barn is the sort of show the National relishes – star calibre with an intriguing plot. Ticking the boxes for a night of entertainment, but little beyond this.