Review of: The Island Nation at the Arcola Theatre

There’s the strange juxtaposition of cynical depiction of heartwrenching realities in The Island Nation – a triumph for all and an important piece of theatre.

The Island Nation is theatre tooled for clear purposes – to inform, raise awareness, and stir a reaction. It’s a harrowingly articulate piece – charting the conflict and civilian casualties of the Sri Lankan Civil War that reached a bloody conclusion in 2009. The scope is wide, covering political, social and, fundamentally, emotional responses to the events of the war, the negotiations and peace treaties.

It’s a lot – too much, certainly, to ever fit into both a 90 minute and the Arcola’s studio space. But both writer Christine Bacon and director Ria Parry are well aware of the sheer mass of information that needs to be communicated in a short period of time. This is done innovatively – the use of projection and gauze being a particularly effective way of both splicing scenes and projecting hauntingly real video footage onto the backdrop, bookending the performance with these vivid, undeniable, pieces of evidence. Even the blasé voiceover, fit for the casual tourist, drips with ironic underpinnings – the international definition of Sri Lanka makes little attempt to recognise the expansive nature of its Civil War. 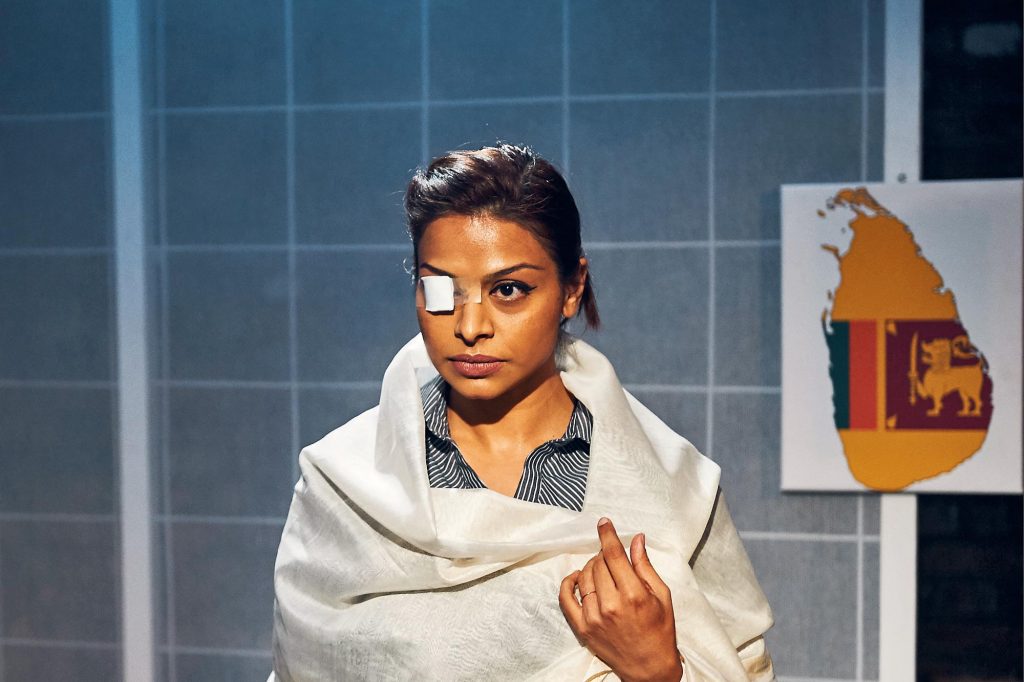 This is a dense period, and Bacon fundamentally confines the narrative to more of a high-political angle (save for a couple of characters), as this is where the story becomes most comprehensive. A shame, perhaps, that we didn’t get longer with the characters in the heart of the warzone – this was when the show was at its keenest, incisively skewering Western idealism and UN policies with tangible, human action. If anything, some of Bacon’s scenes felt somewhat short, cut off by the clattering transition music and shifting the audience to a different location at a different time. A bewildering experience, though perhaps no less bewildering than the Civil War itself.

The cast were consistent, rattling through phases and periods of the conflict with energy and gusto, reaching the necessary emotional climaxes when necessary. Fundamentally though, they took second billing to the issues and events – as should be the case. It was less relevant that these figures weren’t all that well drawn when what they facilitated was so important. This was theatre designed to inform, and it succeeded perfectly in that mission. No one escapes Bacon’s scrutiny – both factions of the conflict, the UN, even us as an audience. We don’t remember the Sri Lankan civil war because it was never ‘top of the pile’. Almost every character is self-interested; even Norwegian peace negotiator Erik admits he’s only involved in the brokering a deal because ‘it’s a way for a tiny nation to get attention’.

There’s the strange juxtaposition of cynical depiction of heartwrenching realities – a triumph for all and an important piece of theatre.