Review of: The Tempest

This production's portrayal of Prospero's island as a literal prison creates a memorable reimagining, supported by strong pacing and intelligent performances. 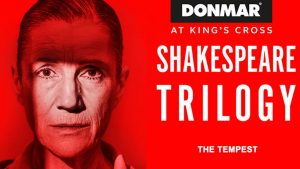 To accompany the re-launch of the Donmar’s previous all-female Shakespeare successes (both Julius Caesar and Henry IV played at the company’s usual Covent Garden venue in 2012 and 2014 respectively), a new production of The Tempest has been created by the same repertory company led by director Phyllida Lloyd and star Harriet Walter. This final piece, rounding out their Shakespeare Trilogy, is housed in a massive theatre-in-the-round right behind King’s Cross Station.

The entire Donmar trilogy works on the conceit that these are plays performed by female inmates as part of a rehabilitation programme. The Tempest quite literally handles these themes by portraying Prospero’s island as a prison and the shipwrecked characters as new inmates, hassled by the guards during their adjustment to incarceration. In the end, each inmate leaves the ‘island’ as her sentence runs out –everyone save Hannah (Prospero, played by Harriet Walter), who is serving life without parole for a political crime. This is a very different approach to that taken in Julius Caesar, where the framing device is set up and then – with the exception of a few interruptions for prison business – the play is left more or less intact.

Both approaches have their merits; however, with its explicit mentions of cells and lack of freedom, The Tempest is well served by a greater presence of prison routines. This highlights the claustrophobia of the island and the unfamiliarity of its life and creatures to those from the outside. This seamless intertwining heightens audience sympathy for the new arrivals – characters who are often villainised for their past sins against Prospero. Additionally, the prison experience is committed to from the audiences’ entrance into the auditorium: the theatre is stark and minimalistic, and the audience must pass through holding chambers controlled by ‘guards’ before taking their seats.

The ensemble cast is uniformly strong; while the play shows many disparate yet interconnected groups of characters before bringing them together in the finale, no plot line or performer drags down the momentum or fails to connect the far-flung characters. Harriet Walter headlines as Prospero/Hannah – both the exiled duke and an ageing prisoner confined for life with no chance of parole. As Hannah, she introduces herself and the play, and Prospero’s control of the island tempered by his despair at missing life on the ‘outside’ reveals the second character underneath. It is a masterful performance. Other standouts are Karen Dunbar as Trinculo – bringing well-timed comedy in her character’s opportunistic approach to island/prison life – and Jade Anouka as an eternally upbeat Ariel who has not lost sight of her impending freedom.

With a play excellently suited to the Donmar Trilogy’s prison conceit, this production both entertains and examines the lives of those outside society. It is a memorable reimagining supported by strong pacing and intelligent performances.

The Tempest is playing at the King’s Cross Theatre until 15th December. Performances are Monday, Wednesday, and Thursday at 7.30pm and Thursday matinées at 2.30pm. Additionally, The Tempest plays as part of the Donmar’s Trilogy Days, where one ticket gains admission to all three shows over the course of a Saturday. Tickets for the one show cost £35-45. Tickets for a Trilogy Day start from £50. However, a quarter of the seats for each show or Trilogy Day are allocated free for under 25s and can be booked online or at the box office the day of the show.