A tremendous show which is not to be missed, the Donmar's reimagining of ancient Rome in a women's prison is vibrant, violent, and immediate.

For the Donmar’s re-launching of their all-female, incarceration-themed Shakespeare troupe – directed by Phyllida Lloyd and led by Harriet Walter – the King’s Cross Theatre has erected a new in-the-round venue directly outside the train station. Immediately upon entrance, the audience is thrown directly into the prison experience, with guards herding attendees into a holding area before opening the stark metal theatre’s doors. The Shakespeare begins sharply; as soon as a guard calls the prisoners to their places, we are in Rome. The language remains almost entirely Shakespeare, with no references to the modern prison setting; however, the ‘inmates’ are limited in their production value, meaning that their bodies and musical talents provide all accompaniment to actions and transitions. It creates an electric atmosphere, one governed by bold choices on the parts of the ‘inmates’ as well as the Roman senators and generals.

These three Shakespeare plays are all framed in the same way: as plays put on by female inmates as part of their rehabilitation programme. Julius Caesar sets up the framing device and then only acknowledges it with interruptions to the action, such as when an inmate has to leave her role to take her medication (prompting another inmate to come in ‘on book’ and perform the role) and when the lockdown notice comes seconds before the play would end naturally. This is a different approach to The Tempest, which actively casts the guards and rehabilitative activities into the castaways’ struggles on the island, seamlessly combining plot and meta-plot. 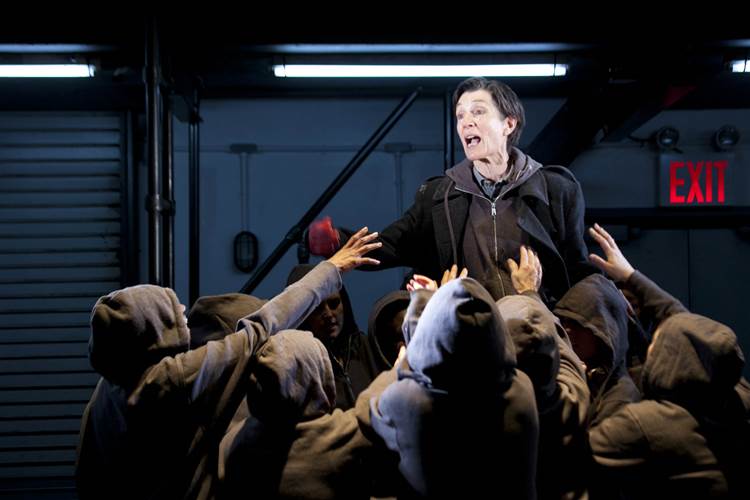 While both approaches have their advantages, the interrupted structure of Julius Caesar is well suited for the play due to the immersion it creates throughout the majority of the plot. The Roman tragedy delves into the issues of self-determination and fate; these questions deserve their space to breathe and develop. When the interruptions occur, they are jarring reminders that the world of honour, democracy, and acting on consciences are at odds with the prison world.

The cast is uniformly excellent. There is a strong ensemble sense in all the actions, which highlights each performers’ power as well as the Roman society’s virility. The headlining Harriet Walter does not lose Brutus to his musings; he is both a thinker and tightly wound to take action from the very beginning. Hers is a mesmerizing performance. Another standout is Jade Anouka as Mark Anthony; she takes her character from Caesar’s charmingly innocent aide to a powerful, grief-stricken warrior, maturing him believably as the events unfold.

The Donmar has not run press nights for its Shakespeare Trilogy, perhaps because two of its pieces (Julius Caesar and Henry IV) have been performed before in the company’s usual venue in 2012 and 2014 respectively. On the night attended here, two days after the US Presidential election, Harriet Walter’s ranting address to the audience (delivered as her prison character, not as Brutus) berating their willingness to sit back and laugh at the frustrated inmates while ‘there’s a dictator in the United States’. This outburst, which must have been altered for the circumstances, got the largest cheer of the night and continued into a furiously celebratory curtain call. While not in Shakespeare’s words, this instance possibly most clearly illustrates this production’s vitality, violence, and immediacy. While no updating is done aside from the limitations imposed by the ‘prison’, this production speaks both to Shakespeare’s timelessness and today’s sociopolitical unrest. It is a tremendous, unmissable show.

Julius Caesar is currently playing in a purpose-built venue at the King’s Cross Theatre until 17th December. With the exception of Monday 5th December’s show at 7.30pm, the remainder of its run is comprised of Trilogy Days: one ticket for all three Shakespeare pieces starting from 11.00am. Tickets for the one show cost £35-45. Tickets for a Trilogy Day start from £50. However, a quarter of the seats for each show or Trilogy Day are allocated free for under 25s and can be booked online or at the box office the day of the show.