Review of: The Children

A slow-burning, starkly beautiful, post-apocalyptic story of one generation's debt to another

At a time when age is revealing itself as a hitherto concealed divide in British society, Lucy Kirkwood’s acidic The Children eats away at this faultline with compelling simplicity. A starkly beautiful three-hander directed with delicious naturalism by James Macdonald, The Children insightfully pits generation against generation, subtly interrogating the Baby Boomers and their famed sense of entitlement with a merciless, slow-burning delicacy. Like Ella Hickson’s Oil at the Almeida, it examines parental debt through the unexpectedly apt metaphor of our energy industry, only with infinitely more elegance.

Set in the kitchen of a small cottage on the windswept Suffolk coast, shortly after a freak earthquake has caused a local nuclear reactor (Sizewell B, although Kirkwood doesn’t specify as much) to irradiate the farm-filled countryside, it focusses on three retired physicists, all ex-employees at the compromised power station. Robin (Ron Cook) and Hazel (Deborah Findlay) live a life of yoga and organic salads and fret about their four children. The enigmatic Rose (Francesca Annis) is an unexpected visitor, an old flame of Robin’s recovering from chemotherapy and nursing a hidden agenda.

It’s not a dystopian play exactly, but it almost is. The entirely convincing world that Kirkwood slowly drip-feeds is simultaneously comforting in its familiarity and disturbing in its difference. A nearby exclusion zone ripples with life-threatening radiation, but the Today programme still bleats out from a wind-up Radio. Decaying cows lay strewn across the fields, but Robin, Hazel and Rose still amiably chat about the old days with abandon. Homeliness mixes with horror throughout Kirkwood’s sublimely understated text. 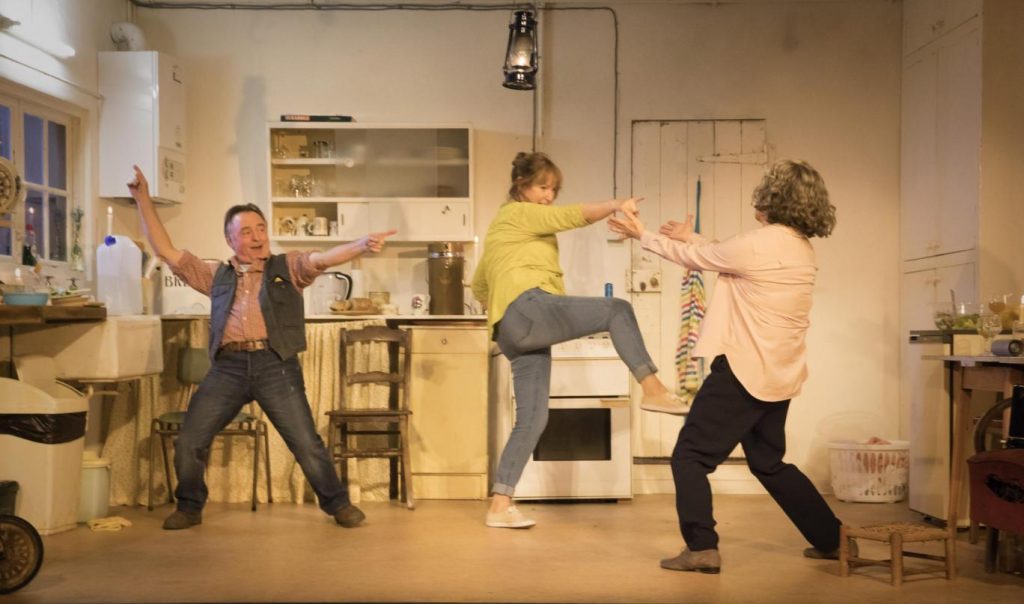 On the surface, The Children is a drily funny, achingly real portrait of three people coming to terms with the deterioration of their bodies and their libidos, but underneath it grows slowly from a tentative flicker into a raging bonfire of inter-generational recrimination. The ever-present shadow of the nuclear crisis mutates from a chilling image of environmental disaster into a shatteringly potent symbol of one generation’s failure of another. As Robin, Hazel and Rose drink homemade Parsnip wine and dance to James Brown, their children – metaphorically – clean up their glowing green mess.

Cook, Findley and Annis are nigh on faultless. Cook’s Robin, brimming with a nihilistic drollness and an aging looker’s desperation to impress, is as likeable as he is repulsive. Findlay’s Hazel is reassuringly mumsy but frustratingly in denial of her own dilapidation. And Annis’ Rose combines the brazenness, contemplativeness and infinite sorrow of a woman resigned to a life alone. On Miriam Buether’s utterly real country-kitchen set, all three evoke a thick, heavy sense of shared history that hangs in the air like a fog.

Kirkwood could perhaps be accused of self-indulgence during the few periods when her writing meanders too far from the ethical thrust of the piece, but in truth, this slow, predatory circling around the dramatic crux is part of the play’s appeal. It takes its time to get there, but when it arrives, The Children is quietly devastating.

The Children will be continuing its run at the Royal Court at 19:30 until 14th January. You can book your tickets from 020 7565 5000 or http://www.royalcourttheatre.com