Review of: Rumpy Pumpy at the Union Theatre

A well intentioned musical that makes you chuckle like a seaside postcard but with an edge to make you think.

Rumpy Pumpy, by Barbara Jane Mackie who is the writer, composer and lyricist of this doubty tale is a fun romp with a historical twist. The battling home-county ladies of the WI, with the help of the brothel madame, take on the establishment and seek to have prostitution legalized. Previously showcased at the King’s Head this production now boasts of large cast and enough plot to take your breath away, as it snaps between the lives and adventures of a range of sex workers.

Much fun is to be had with the rudery; but along side the dirty-postcard innuendo there was often a more serious point to be made about personal safety, exploitation of working women and their conditions – not to mention the sheer NIMBY hypocrisy in society.

Women come and go at the Blue Saloon, trying to make ends meet. These women, from right across the social spectrum, often hold down more than one job as well as work at the brothel and they are taken care of by Madame Holly, played with great gusto by Linda Nolan. She drives her scenes along and makes every effort to give, what is at time a challenging subject, a touch of levity.

Though managing the social commentary, the topical issues and the fun were not always as finely tuned as they might be. The ongoing friendship of the two WI ladies, Jean and Shirley, played here by Louise Jameson, as a determined open-minded individual without an element of the do-gooder w 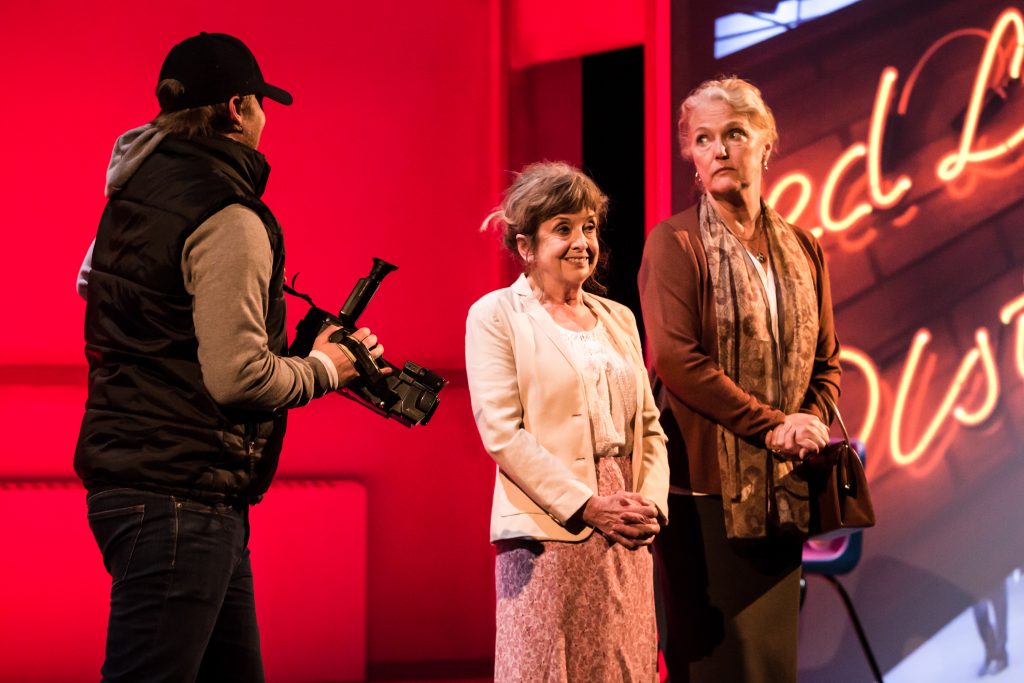 as refreshing and her companion, Tricia Deighton, was a splendid foil for Jameson both physically and vocally as she delivered many of her lines with just enough of a nod and a wink, which allowed the audience to appreciate the lightness of touch this production was reaching for – it is a musical after all! But at times their own personal journey was lost as the action rollicked to and fro in the Blue Lagoon.

Certainly, searching for the perfect brothel allowed for saucy fun to be had across a range of characters and it was refreshing to see this predominately female cast take charge and explore the material in both a knock-about and full hearted manner. The singing was solid and in a bigger space the company would really have opened up and given it even more value as the space felt so limiting, at times but it was easy to imagine the company numbers having greater production values as tunes were both catchy and the ballads suitably heartfelt.

The piece presents panoply of characters, fleetingly sketched and quickly recognized as the cheating husband, dodgy vicar, dubious DCI, single mum broke law student and even a tough lesbian detective, all of whom exploited and betrayed the women. Home life did not seem much better for some of these women with inferences of abuse both mental and physical but as we journeyed with our home county observers we discovered a world of compassion, support and understanding, where needs must and judgment was left at the door. The perfect brothel seems to be one where women should feel empowered, respected and capable to organize their own lives, which is as much a commentary on society as it is on the ladies of the night. Of course that was one the myth firmly knocked on the head as these ladies are busy 24/7.

Liberty Buckland’s strong vocals and Sally Firth’s perky characterisations impressed but in truth, although the entire company pushed the piece along with verve if does it feel, at times, as if refining and shaping the piece further would not go amiss.

This lively piece can be seen at Theatre Royal Windsor 1st to 5th November transferring to the Union Theatre 14th 19th November.