Review of: Romeo and Juliet

This genuinely moving production terrifically highlights the youth, vitality, and irrepressible vivaciousness of the younger generation caught in their ancestors’ struggles.

The Rose Playhouse – home to touring Shakespeare and early modern productions set on the archaeological site of the Elizabethan theatre, just minutes from the Globe – is currently hosting Wolf-Sister Productions’ retelling of the star-crossed lovers’ tale coloured by the current migrant crisis. What emerges is a Romeo and Juliet for today; while the migrant angle is not explored as far as it could have been, the characterisations drawn and enormous vitality brought to this retelling heightens the farcical, tragic, and human elements of this classic.

The play stays true to the ‘two hours’ traffic’ promised in the Prologue; it is tight, fast-paced (characters rarely entered or left the stage at slower than a run), coherent, and gripping. Verona is caught in gang warfare – the Montagues and Capulets both wear black hoodies and carry switchblades – and the youth who may not have much interest in the feud (here, Romeo and Benvolio) are drawn into the chaos almost against their will, as the play’s chain of events (partly spearheaded by Tybalt and Mercutio) set the tragedy in motion. While the text is not updated, it is delivered in distinctly teenage cadences, immediately endearing the characters to the audience and creating a hope that perhaps, in this world, the famous ending is switched for a happier one. In a lovely twist, Montague, Friar Lawrence, and Benvolio are all cast and played as women, keeping the characters’ motivations and traits intact while helping the play feel more modern (additionally, opening up a relationship between Mercutio and Benvolio did not detract from the original – if anything, it added more hot blood and hormones to Verona’s high-spirited youth!).

The fact that the production uses tent city and gangland aesthetics in the show while not changing any text to fit the current refugee crisis is both a strength and weakness of this adaptation. Aside from the programme notes and the actors’ plea for donations to the Islington Centre for Refugees and Migrants at the show’s conclusion, there is nothing explicit in the actions or text to link the characters to today’s migrants. The setting as it is used works well – almost creating a monochrome version of Baz Luhrmann’s high-octane vision – but it would have been interesting to see the migrant angle taken further. 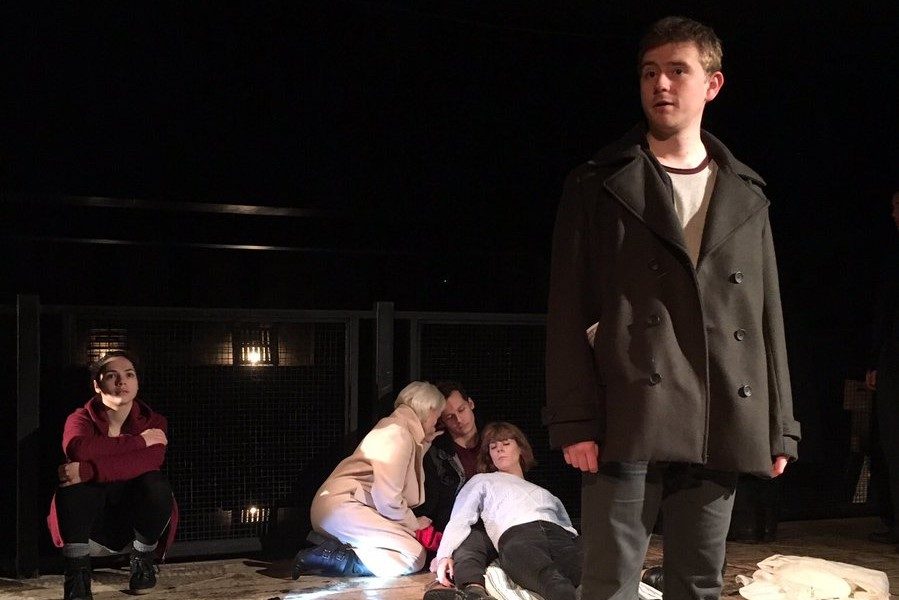 On the other hand, however, side-lining externally imposed themes allows a laser focus on the characters and text. The cast, most of them quite young themselves, bring energy and intelligence to their portrayals. All characters are immediately distinguishable by their actions – even the minor ones – and even Tybalt and Lord Capulet are sympathetic in motivation. The text is spoken naturally yet with regard to all scansion, making it sound like ‘normal’ speech while losing none of the poetry. This combination heightens every atmosphere and emotion, making the contrast between the play’s mostly comedic first half and wholly tragic second excruciating as disaster unfolds. In this sense of its style and pacing, it is arguably a better Shakespeare play than most seen at the Globe’s Wonder Season and better Romeo and Juliet than Kenneth Branagh’s high-profile Garrick production in the summer.

On the whole, this production terrifically highlighted the unreasonable pervasiveness of the age-old feud; the youth, vitality, and irrepressible vivaciousness of the younger generation caught in their ancestors’ struggles; and the heartbreaking moments when the previously joyous lovers’ fates are tragically sealed. It is one of the most genuinely engaging and moving pieces of theatre seen this year, and highly recommended as an excellent example of Shakespeare’s relevance and power today. Wolf-Sister Productions have brought a loud reminder of the play’s timelessness.

Romeo and Juliet plays at the Rose Playhouse until 10th December 2016. Tickets are £15 (£12 concessions) and can be booked at http://www.roseplayhouse.org.uk/events/event/romeo-juliet-william-shakespeare-2016-11-15/. Performances are Tuesday-Saturday at 7.30pm and Sunday at 3pm.