Review of: Nice Fish at the Harold Pinter Theatre

Nice Fish has nuance and wonder, constructed a sheet of ice that, while sometimes dangerous and hostile, is also homely and enchanting.

Nice Fish is a show that ‘owes’ – its theatrical success is in part due to its fundamental life as a service to a person or artistic movement. It inhabits a space of being made feasible only through existing artistic endeavours and personal experiences. This debt to other factors seeps through the edges, like water over thawing frost, becoming more and more transparent, clearer, over time.

Rightly so – and this is a face the show can only be lauded for. Immersing itself deeply in the prose poems of Louis Jenkins, what emerges from writer and star Mark Rylance is something far from tangible, yet always wonderfully enchanting and bold. Rylance has transported the untethered (and often hilarious) musings of Jenkins to an isolated, empty canvas of a frozen Minnesota lake, creating a mosaic and slowly metamorphizing patchwork of episodes that embellish both the characters that we find and the context in which they live.

It’s unconventional, refreshingly so – aided in spades by Rylance’s almost tone-perfect performance as ‘Ron’. Knowing when to press the mute button, this is a part delivered delicately, coaxing out ripples of laughter as if on a whim. There’s a reason, after all, that the actor is revered. His physicality, especially in the plays melting moments, is truly transformative – it was exciting to see this on show in a play that often places dialogue over movement. If Rylance is to be commended (as he invariably will be) so too must Jim Lichscheidl’s Erik, who delivers some of Jenkins’s prose with a natural ease – getting some of the biggest laughs of the night as his character’s existential angst unravels itself. 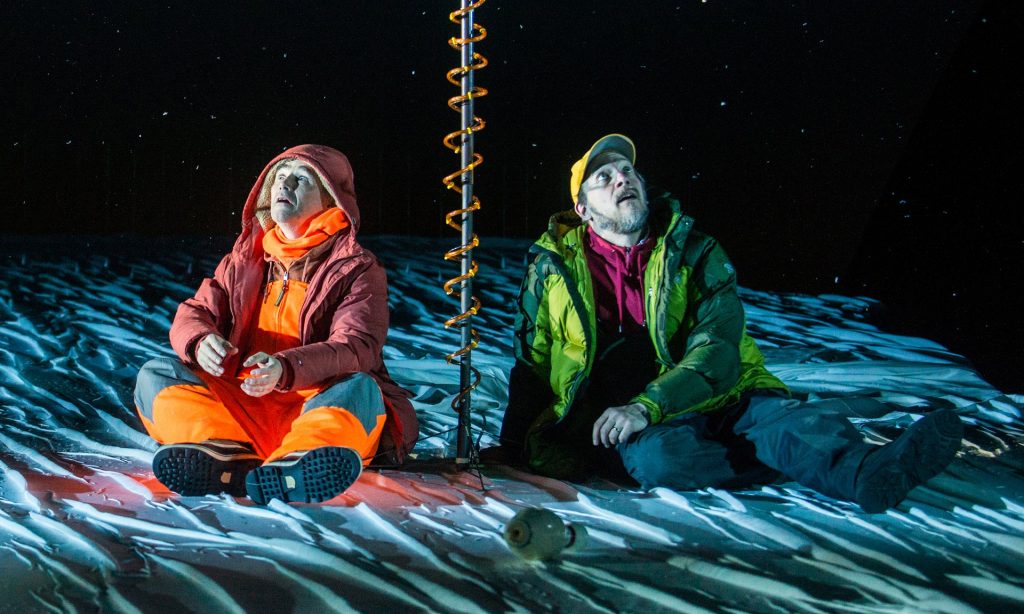 Director Claire van Kampen strings all of these parcellations together in a way that never feels unnatural or forced, granting the audience time to digest and mull where necessary. Often the show feels melancholic, sometimes tinging on anarchic – all seeping and spilling into one another. This can jar on occasion, but attempting to place all of Jenkins’ work in such a way will often result in some tight squeezes.

Todd Rosenthal delivers a fun design in the form of a slanted ice sheet, concealing various hidden contraptions and wonderful puppetry interludes from Mohsen Nouri. (On a side note, Rosenthal’s backdrop also had a passing resemblance to a vintage New-Who adversary). Each in turn layered Nice Fish with additional nuance and wonder, constructed a sheet of ice that, while sometimes dangerous and hostile, is also homely and enchanting.