A thrilling night of hard-hitting topical drama was brought to the stage by Actor Awareness in their latest new writing night focused on Mental Health.

Actor Awareness celebrated a year of new writing nights showcasing the skills of a wealth of emerging writers, actors and directors, each on a topical theme. A recent partnership with Spotlight has meant these creatives are all paid for their work and gain a professional credit.

The evening kicked off with Stephanie Silver’s Immerse, a play exploring a couple’s decline into dementia and the affect this had on their daughter. Fragmented and displaced, much like the failing minds of our protagonists, it raised a moral question about the cost of retaining one’s memories and the lengths we would all go to. 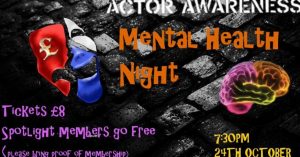 Owls by writer Jayne Woodhouse was a touching story of the hapless security guard begging the young woman not to jump off the roof to her death… at least on his shift. The charm and charisma of Dave House as Steve brought light relief to Kate Austen’s suicidal Anna as both performances shone through.

Michelle Payne wrote and acted in Sad about the Cows, a standalone monologue about a young woman’s gentle spiral into the world of eating disorders. Directed by Emma Pritchard, this was performed with cheery optimism, the glints of a darker force at work just poking through the cracks.

Mandem written and directed by Lee Whitelock ended the night’s theatre. A gritty tale of one misunderstood woman’s struggle was held with strength by actress Natalie Edward alongside a dynamic Lewis Brown in a hard hitting piece with poetry interwoven.

The evening was finished as founder Tom Stocks introduced fellow actor Ollie Regan who was his inspiration for setting up the night. Gradually the subject of mental health seems to be creeping into the arts, with World Health Day and #Time4Change gaining momentum and recognition in the industry. However few are prepared to talk so openly about their personal experiences for fear of persecution. Regan’s brutally honest speech about his own mental health as an actor brought home why the evening needed to happen and brought such a genuine poignancy to proceedings. Actor Awareness is going from strength to strength and hopefully many more nights will follow.