Review of: Lunatic at Theatre N16

Gratuitous and excessive, yet simultaneously tiresome, 'Lunatic' at Theatre N16 suggests that sometimes source material should be left alone.

As All Hallows Eve inevitably saunters into the public consciousness once again, it is also inevitable that theatre companies will stage their various interpretations of traditional ghost stories, perhaps adding their own subtle nuances to produce a more unique contribution within an overly saturated genre. Riot Act’s Lunatic at Theatre N16, an adaptation of Bram Stoker’s classic novel focusing on the psychological assessment of Dracula’s servant Renfield, was neither ‘subtle’ nor ‘unique’. Its bastardisation of the source material, as well as its desire to include segments that were more convoluted than clever made this production, at best, a bloody and befuddled shell of this beloved tale.

The central problem of this production stems from choosing Renfield as one of its primary characters. In Stoker’s novel, Renfield is a somewhat one-dimensional, obsessive, bug-eyed, hissing creature, and arguably a mere tool to assess the comings and goings of the dreaded Count. Therefore, focusing any Dracula adaptation on Renfield creates one blinding concern: unless you want to sculpt an entirely different character in support of your narrative, you are still faced with a hissing, one-dimensional protagonist – and if he isn’t hissing, he is incessantly screaming. Unfortunately, Lunatic’s Renfield felt very much as if he was bounding relentlessly between these two states of being, with next to no variation of character or personality. Stoker’s Renfield is engaging because he is visible in consumable doses: he is a physical reminder of Dracula’s constant presence and force of will, permeating the lives of the Harkers, Van Helsing and their friends, and then the subsequent driving force of the plot are their reactions to this omnipresent evil. Take that away, and we are left with something far less engaging.

It feels as if Writer/Director Whit Hertford knew this, however, and therefore decided to include things for Renfield to do, one of which, was to have performer Chris Spyrides portray Dracula in conversation with Renfield, as if the creature were talking through him in a manner of demonic possession. This might have worked, were the voice chosen for Dracula not the now considered stereotypical vampiric voice – essentially, something vaguely in the local vicinity of Eastern Europe. After around eighty-five years since this voice was made famous by Bela Lugosi, the ‘Dracula accent’ has become, quite frankly, comical, and especially once it had been used for a felt puppet on Sesame Street, this should have been enough to avoid using it in serious drama. 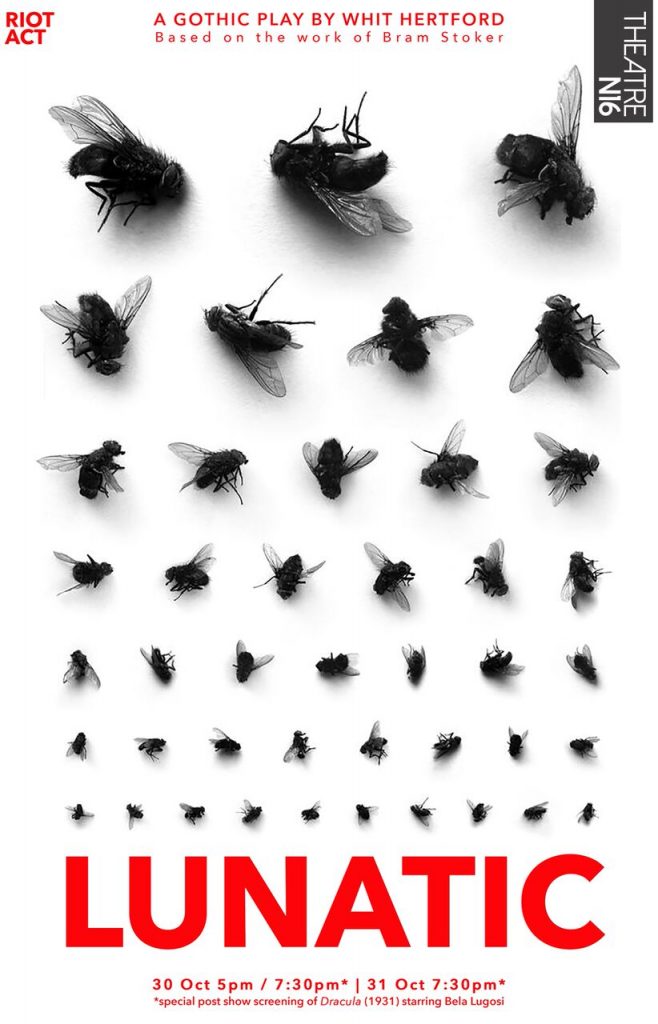 Lunatic’s attempt to invent drama not present in Stoker’s novel in fact produces a worrying result: in between moments of psychological discussion with Dr Seward, there is a total of at least, by my calculations, three sexual assaults. On reflection, Hertford could have been trying to do one of many things with these scenes: perhaps he wanted to portray the extent to which Renfield had been abandoned by Dracula; or comment on the treatment of so-called ‘lunatics’ in mental health institutions. Instead of this, however, there was gratuitousness for gratuitousness’s sake. By no means do I think that this was purposeful; I do think a symbolic interpretation was being attempted, but which unfortunately remained out of reach. Whenever sexual violence is included in a production, it such a horrific thing for any actor to have to put themselves through, and is incredibly harrowing for any audience to have to witness, therefore if you do it, it must be with care and consideration.  However, if they had been cut out of the play, it would have had no impact on the rest of the narrative. Further additions included an ending which entirely disregarded the Gothic text by careening into baffling spectacle of nudity and gore which, instead of providing a dynamic twist to the story, seemed as if it had been included as a manically rushed plot device in lieu of a better ending. I am certainly not a traditionalist, and in fact revel in theatre practitioners experimenting with established texts to create new avenues of interpretation, but not at the expense of constructing a coherent and enjoyable plot.

There were additional problems that were far less severe, and could have been solved with just a little more rehearsal. For example, there were many instances where sound effects were used intermittently, and music seemed to be inserted randomly into scene changes, while other blackouts were left in silence. When the actors spoke, there were moments where they were so quiet that you could not hear them, or they spoke with such emotionally-charged voices that they became incoherent. Despite this, Lunatic’s saving grace came in the form of Dr Seward, played Justin Stahley, who, despite the occasional enunciation problem as well, possessed the longed-for range and depth of feeling. However, his more compelling and entertaining moments were sadly far too few in number to save the production as a whole.

When any classic piece of literature is adapted, there should be no limit on creativity or ingenuity, but nor should an adaptation lose the inherent spirit of the original text, otherwise it can no longer be classed as an ‘adaptation’. If you are going to drastically alter it beyond adaptation, then the piece must at least be entertaining or engaging. Although there were attempts at creative engagement, Riot Act’s Lunatic at Theatre N16 was a tangled and lethargic production that no amount of shrieking could resolve. It seems that sometimes, beloved literary works should be left alone.

Lunatic was performed in the Globe Space of Theatre N16, accompanied with a screening of the 1931 film Dracula starring Bela Lugosi and Dwight Frye. The show ran from 30th – 31st October 2016.