A bizarre, beautiful, and ultimately brilliant work, Lazarus brings some of the art rock icon’s best works in innovative arrangements to a dreamlike theatrical triumph. 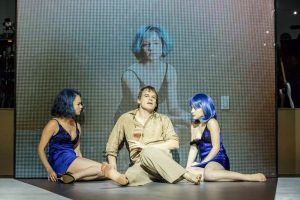 David Bowie’s final two works – his first ever stage musical Lazarus and his album Blackstar – were not only both produced months (or days) before his death, but share similar themes of someone coming to the end of his time. Indeed, the album’s third tracks lends the show its title, and when lead character Thomas Jerome Newton (Michael C. Hall) belts its opening lines barely five minutes into the show, it sets the tone for the ensuing hundred minutes.

Lazarus is a sequel to the novel-turned-film The Man Who Fell to Earth, a bizarre cult classic whose 1970s film adaptation starred Bowie himself. Newton – the alien protagonist in both – is still stuck on Earth after the events of the novel/film, unable to return to his family or to die in his new reality despite his best efforts. As his personal assistant Elly (Amy Lennox) uses Newton’s ex-girlfriend Mary-Lou to escape her home life and the mysterious, maliciously obsessive stranger Valentine (Michael Esper) arrives in New York, prying into Newton’s existence, an otherworldly Girl (Sophia Ann Caruso) appears in Newton’s life. The only thing she knows is that she had to get Newton home. The premise’s wistful sense of searching pervades the arrangements of Bowie’s hits – including ‘Changes’, ‘Life on Mars’, and ‘Heroes’ – which propel the characters’ actions throughout a meandering plot.

Much criticism directed at the original film could be applicable to Lazarus: in short, there are too many ideas spread thin under a highly abstract style. The fact that Lazarus is baffling at times does not distract from its beauty; indeed, while its abstract nature thins the plot in certain sections, Newton’s loss, longing, and otherworldly nature is made more tangible by their abstraction. Additionally, the musical format lends itself naturally to heightened reality, and director Ivo van Hove and designer Jan Versweyveld use a minimalistic backdrop to play with lighting, space, and depth to transform the space from Newton’s apartment to a New York nightclub to dreams, visions, and nightmares. The images created by the design team are haunting, heightening Newton’s lack of belonging on Earth and sympathy for his plight.

While not mimicking either Bowie’s performance in The Man Who Fell to Earth or his iconic voice, Hall brings his own brand of outsider to the tortured character. His voice is not perfect, but his intentions and emotions are rich in ever song. He is onstage when the audience enters the auditorium and barely leaves it throughout the performance; throughout this whole time, even when not the focus of the action, his fragile, fiery presence draws attention. Fifteen-year-old Caruso is uncannily sweet, sprightly, and steely as Newton’s innocent, indefatigable guardian angel. She is blessed with a truly angelic voice with the power to command such iconic songs such as ‘Life on Mars’ (the most poignant moments in the show). Lennox brings a convincing and sympathetic mix of rebellion and resignation to Elly. Lastly, Esper plays Valentine with a dead-eye glint, unsettling the audience before the reason for this reaction is evident. His triumphantly menacing solo (‘Valentine’s Day’, naturally) is a high point of the show.

A bizarre, beautiful, and ultimately brilliant work, Lazarus brings some of the art rock icon’s best works in innovative arrangements to a dreamlike theatrical triumph. Bowie aficionados and modern theatre fans would be amiss to ignore this dazzling production.

Lazarus runs until 22nd January 2017. Performances are Tuesday-Friday evenings at 8pm; Saturday evenings at 8.30pm; and Wednesday, Saturday, and Sunday matinees at 3pm. The Christmas schedule sees extra 3pm shows on the 23rd, 30th, and 31st of December; no 8pm show on 24th December, and no show 25th December. Tickets cost £15-95 and are available online through https://lazarusmusical.com/ticket-info. Under 25s can get any seat for £25 at Wednesday matinees, ID required.