Chatting with Sean Michael Verey ahead of his turn in the newly revived London run of Tonight with Donny Stixx, (after a barnstorming run at the Edinburgh Fringe in 2015), it became obvious that here was an actor itching to return to a part.  ‘We’re only doing a few days rehearsal, mainly in my living room’, he notes – ‘there might be a few niggling bits, but nothing major…very much a case of ‘if it ain’t broke’ ‘. It seems as though Stixx is a second skin for Verey, ready to be put back on without a second’s hesitation after a 15-month absence.

This enthusiasm is all the more significant given that Verey found the Fringe run of the show, at some points, challenging. A month at Edinburgh’s Pleasance Courtyard was gruelling, the actor, now in his mid 20s, remarks – especially as this was his first time doing the month in the city. The situation was intensified by the fact Donny Stixx was a one man show – another first for Verey. ‘It was exhausting. You feel as though you’re on a treadmill a bit. I felt very lonely…you’re sharing the changing room with four or five different companies all talking to each other and you’re just sat in the corner by yourself’. 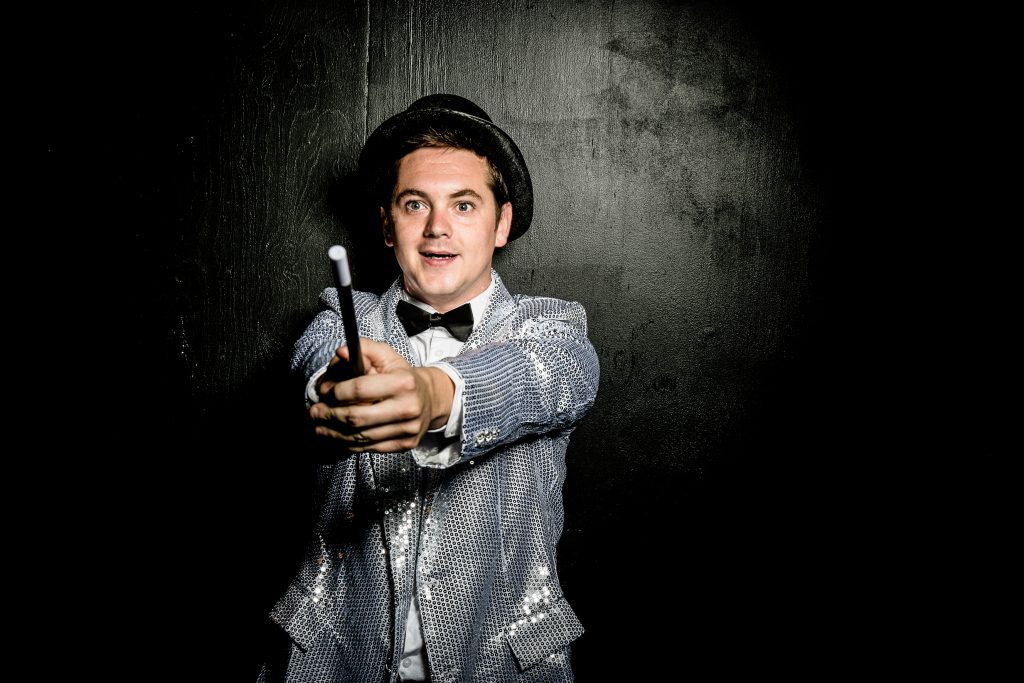 On stage, this loneliness could manifest itself: if a bit doesn’t land then you will invariably take it personally, or, as Verey puts it, ‘there’s no one else to blame, or no one else to discuss it with afterwards.’ Thankfully the show was a runaway success, with a raft of rave reviews and Verey himself picking up a Stage Award for Acting Excellence. ‘All the hard work paid off. We did it – it was a relief. It was a personal learning curve and a fantastic experience but you go through the ringer a bit.’

This time around, Verey has a far less intense schedule, meaning he can live a bit more of a normal life. ‘There’s a bigger sense of control…we’re not trying to prove ourselves – it’s already done well and been well received.’ Furthermore, being included in The Bunker’s inaugural season is an exciting prospect – the space is, as Verey puts it, ‘a little gem’. Having already been blown away by the success of Skin A Cat (currently playing), following up that show with Donny Stixx brings an opportunity to give audiences a wonderful time.

Philip Ridley is one of those writers that, every time you get one of those phonecalls, you get a rush and ask ‘what now?’’

Verey is in the fortunate position of having developed a great partnership with writer Philip Ridley (Verey recently starred in Ridley’s Radiant Vermin, touring to New York and back). In fact, Ridley approached Verey about Stixx just after the original Radiant Vermin run had ended; a signal, perhaps, that Ridley wrote the part with Verey in mind. ‘Philip Ridley is one of those writers that, every time you get one of those phonecalls, you get a rush and ask ‘what now?’’. Indeed, Most importantly, Verey believes in Ridley – cares about his work and the fact that it often exists ‘entirely in the moment’.

Tonight with Donny Stixx at the Bunker will invariably continue this stellar collaboration between Ridley, Verey, and their creative team. It’s a show that responds directly to existing cultural phenomena (as many of Ridley’s do) – in this case the raft of talent shows that exist. The prominence of X Factor is a key to this. As Verey puts it, ‘The Victorian Freak Show never went away. We thrive off the humiliation of these individuals failing…You see the delusion they’ve been fed, and when it goes away, in some of those moments…you see pure anger.’ Ridley directly responds to this in his text, using the character of Donny as a means of both colluding with and then undermining audience expectations. As Verey put it, ‘some people come up to me afterwards and say certain scenes were unbearable to watch’. It’s a tantalising idea for a show and one that has already captivated audiences at the Fringe – now Londoners get the same treat.

Tonight with Donny Stixx opens at the Bunker Theatre on the 8th November until the 3rd December. More information here.