Apocalypse Cruise Ship Love Affair is a masterpiece: a crisp, quotable, madcap adventure that stops at nothing – even Armageddon – in its quest for stomach-clutching hilarity. Its gleefully low-budget tone wraps right round the auditorium, from the three-piece band to the bunting over the seats.

In appropriately preposterous B-movie fashion, it tells the story of a ship captain who hijacks his Caribbean cruise to find his drowned beloved – who he believes is at the centre of an apocalyptic storm in the Arctic. Meanwhile, Hank the cruise ship rep (with an endearingly wandering accent – he was born at sea, after all) falls in love with a nun who realizes the End is Nigh. Bemused? It’s a testament to the cast’s commitment to the material that even the most ridiculous plot points are taken with exceptionally straight face.

The cast’s performances are far too big for the venue, which only increases the fun. The chaos is anchored by Joe McArdle’s gloriously deranged Captain, whose every action is delightfully bizarre (‘POPPY’S COCK!’ he booms at an employee, and delivering the lyric ‘flailing’ with wildly waved arms and a ruler-straight face). McArdle’s demented serenity neatly offsets the high emotions of his crew and passengers – Will Hearle’s devoted first mate is a constantly twitching, posing, pursued-lipped comic creation testifying to an impressive performance stamina. Elsewhere, the central love story is sweetly told by Craig Methven and Imogen Brabant, and Steve Duffy (co-author alongside the director Theo McCabe) and Roz Ford play joyfully outsized octogenarians (“it’s crawling up the deck … it’s horrible! … oh, it’s just old people”). The characters here are larger than life, in their voices, poses, and desires (“Fuck your girlfriend!” the Captain bellows at Hank. “I can’t! She’s a nun!” is the pained reply). 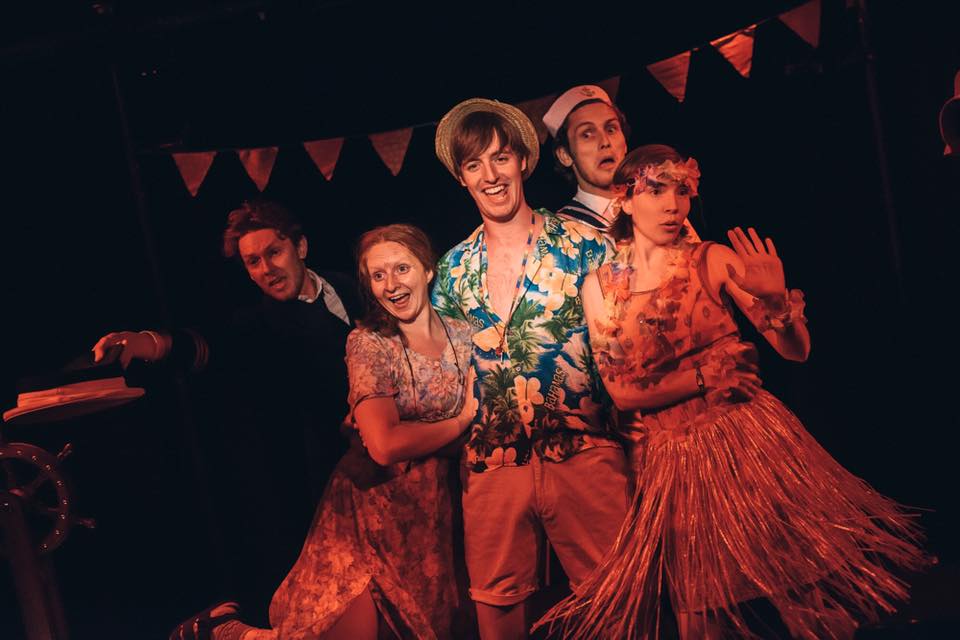 The choreography is simple, but pulled off with aplomb (the literal approach to ‘in the air’ was a particular highlight). The staging is sometimes chaotic, but there’s always something to look at, even if you’re not sure where to focus. The songs are surprisingly catchy: ‘Six Inches of Face’, Hank’s determined ode to what he can see of the woman he loves, is a disarmingly sweet soul number, while the ultimate stand-out is Vera (Ford)’s eleven-o’-clock number ‘One Night’, leading the cast in a belty hymn to celebrating their possible last night alive. Unlike their last show, the ensemble piece Vampire Hospital Waiting Room (disparate sets of nouns are evidently a forte), there’s a wise emphasis here on solo moments where each character holds the stage, including a witty disco number for Brabant’s nun borrowing from the Book of Revelations.

Apocalypse Cruise Ship Love Affair is outstanding late-night entertainment with jokes and songs – the classic ingredients of a musical comedy – that’ll cause fits of laughter days after you’ve seen it. Beach Comet are a force to be reckoned with – when their next show hits the earth, buy a ticket straightaway.