Review of: All My Sons

It’s pretty much impossible to stage a bad production of All My Sons. It’s such a staggeringly accomplished play, such a rivetingly fierce dissection of post-war America, that a cast could probably just stand stock still on stage and read Miller’s dialogue in a flat monotone, and I would still love it. Michael Rudman’s awkward staging doesn’t knock it out of the park, but it has enough guts and enough gumption to leave me a quivering, teary wreck by the curtain nonetheless.

It’s 1947. The Kellers are an Ohio family still reeling from the Second World War, and from the death of their eldest son Larry flying missions overseas. Joe Keller (David Horovitch) is an ageing, all-American patriarch and owner of a thriving manufacturing business, a business that blossomed making airplane parts in war. Kate (Penny Downie), his eternally hospitable wife, is still waiting in vain for Larry’s return. And Chris (Alex Waldmann) is their socialist, ex-pilot second son, a man who “makes people want to be better than it’s possible to be”, a man tormented by survivor’s guilt as he plans to marry his dead brother’s girl, Ann (Francesca Zoutewelle). In three revelation-filled and expertly developed acts, Miller charts the crumbling of the Kellers’ happy family façade, simultaneously airing an overwhelming powerful critique of American life. What a play. 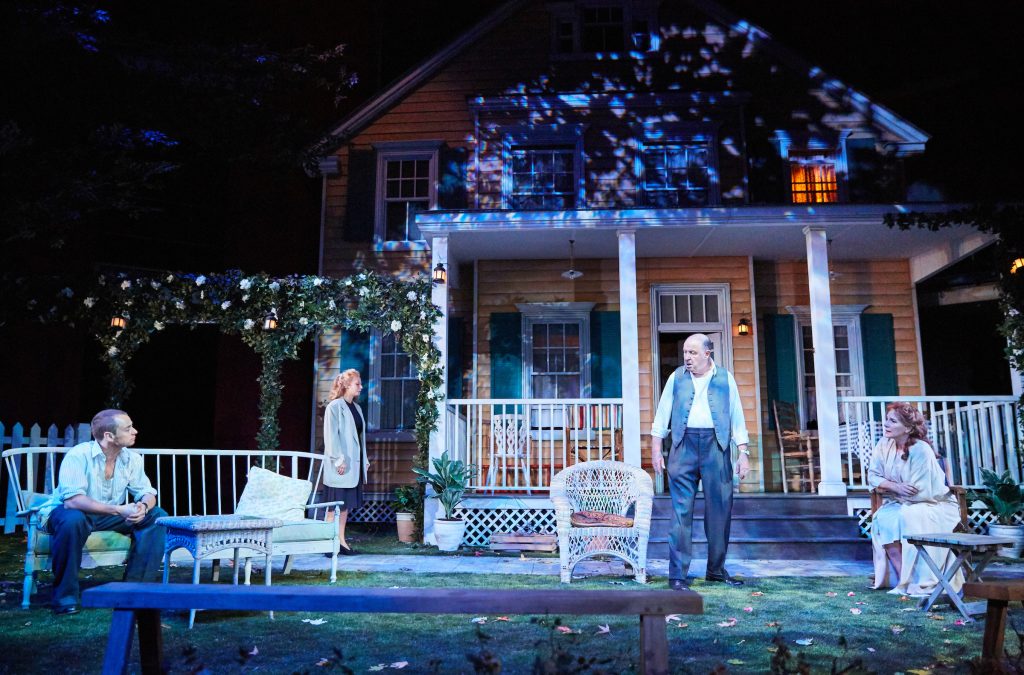 The world Miller carves is so rich in detail and so soaked in history that it lives and breathes on stage, helped in this instance by Michael Taylor’s sublimely authentic set – a claustrophobic arena of neat lawns, picket fences, deckchairs and nostalgia. In Aristotelian fashion, the action all takes place on the Kellers’ porch over the course of one day, and this progression is neatly delineated by David Howe’s lighting, which transitions subtly from bright, breezy morning to oppressive, gloomy dusk. One minor irritation: the more ethereal touches in Martin Hodgson’s sound design add little to the action – spacey piano tinklings do nothing to enhance the force of Miller’s dialogue.

It’s in the uneven performances and overtly deliberate direction that this revival disappoints most, though. Waldmann is a superb Chris, principled but not preachy, and convincingly torn apart by love and honour in the latter scenes. But it’s too easy to pity Horovitch’s Joe. Joe is a proud, bullish father whose life is constructed around stern philosophies of family and financial success; Horovitch gives us a rootless, shuffling, defeated grand-dad instead. Downie’s Kate is appropriately motherly, but never truly reveals the emptiness in her heart. And Zoutewelle, whose accent wanders as Ann, is just a bit bland.

These are problems exacerbated by Rudman’s glaringly obvious direction. For all the evocative naturalism of Miller’s script, there is little authenticity in the way the Kellers interact and move. Actions explode inexplicably, the wrong phrases are inappropriately weighted with significance, and Rudman’s hand can be felt on his cast’s shoulders throughout. The result is a bizarrely alien production of an essentially human play. It’s still an arresting watch, but it could be ten times as powerful.

All My Sons will be continuing its run at the Rose Theatre, Kingston at 19:30 until 19th November. You can book your tickets from 020 8174 0090 or http://www.rosetheatrekingston.org/