FINLAY CORMACK plays Laertes in Flute Theatre’s extraordinarily stripped-back Hamlet – featuring only six actors and a sofa, it explores the events of the play in only ninety minutes, with the action taking place over one impossibly claustrophobic night. Following performances across Europe, including the Gdansk Shakespeare Festival, the Craiova International Festival, the Neuss Globe Shakespeare Festival and Elsinore itself, the show will perform at Trafalgar Studios from the 6th – 31st December. Get tickets here. 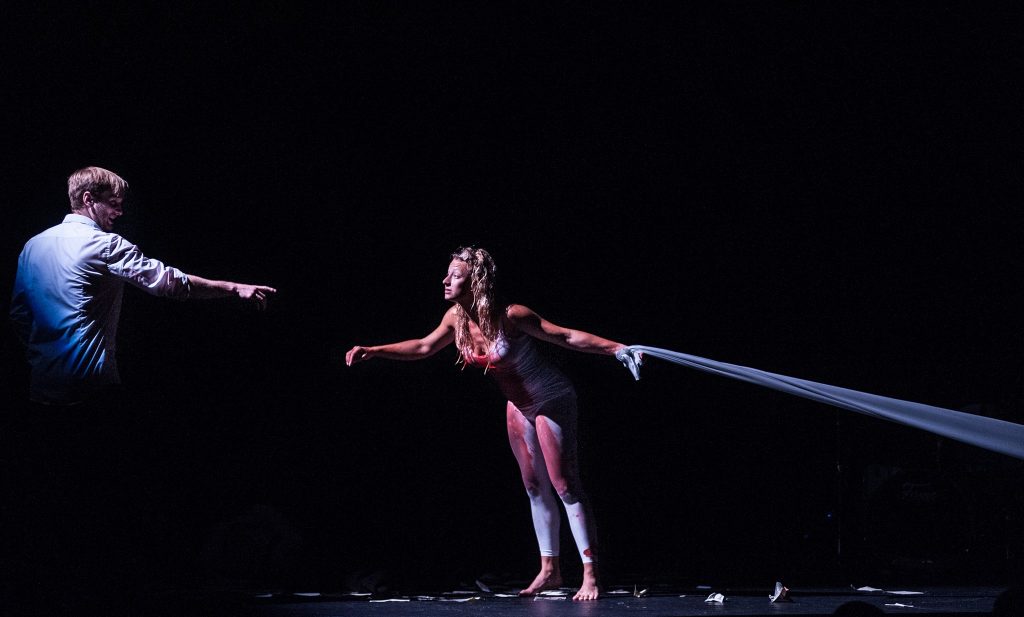 Theatre Bubble: This sounds like a fascinating production – please tell us more about Kelly Hunter’s twist on Shakespeare’s tale?
Finlay Cormack: It is an extremely intense and claustrophobic production of Hamlet where we see two close families bringing out the best and worst in each other. As Laertes I am Hamlet’s best friend and an amalgam of Laertes, Horatio, Rosencrantz and Guildenstern. It’s been a lot of fun to play because of how each of their characters still feed into Laertes’ actions. Kelly’s adaptation dissects loyalties and pulls them all in different directions.

TB: This production has had a long life, performing at theatres across Europe. Any highlights of the tour?
FC: We’ve been to incredible places so it’s hard to pick. My first job was with this show when it went to Gdansk in August 2015, and it was a brilliant feeling to have some momentum just after graduating. Overall it’s hard to beat Elsinore castle, a place I’m grateful to see, let alone perform in. Though we did get rained off briefly in one performance;  Mark was still shouting his lines over the noise of the weather while I was trying to subtly say we’ve stopped the show.

TB: Has reception of the production differed in different countries?
FC: An English company taking Shakespeare abroad will always have its draws, but it’s been crazy to see the turnout.  In Craiova, we ended up with 300+ people in a studio space. Audiences have the same positive reaction by the end of the play, but the great thing is the change in how they got there. Audiences invest in different scenes. When we were in Germany, the audience really responded to the humour between Polonius and Hamlet in a way we hadn’t seen before.

TB: Do you think this production caters to a modern taste for stripped-back Shakespeare?
FC: It’s so important for people to find Shakespeare accessible, and that’s what Kelly has sewn into the heart of the show. The story has been condensed into 90 minutes without an interval, with all the action taking place during one night in one house. This may be a cut version of Hamlet but this change adds so many refreshing things for the actors and audience.

TB: What advice would you give to anyone considering a career as an actor?
FC: Persevere. Knock on every door – literally – because you never know what may come of it. A few months ago I went for an audition and on my way out, I noticed there were other auditions going on for a different play. I knocked on the door and asked if I could audition too. I ended up getting that part. Also, invest in a tripod.

TB: What is the greatest challenge facing actors today?
FC: I think dealing with uncertainty is the greatest challenge – emotionally and financially. As actors we are told to be one thing then its opposite in quick succession – being open and vulnerable with a role – then growing a thick skin to deal with rejection. It’s tough but it’s about keeping your focus on things you can control.