Review of: The Dresser

Sean Foley’s pre-set for his production of Harwood’s ‘The Dresser’ is our first step into a historical world. Michael Taylor’s design cascades down, from the lighting rig to the flies, to the dressing room below – reminding us that the actors we praise rely on a backstage team we never see. The first actor to appear stands silhouetted, smoking in the flies – by hiding his face and identity Foley prevents us guessing his place in the backstage world ‘The Dresser’ explores. The play as a whole grapples with the hierarchy of this world: though the story centres on the actions of ‘Sir’ (Ken Stott), a veteran actor-manager determinedly touring Shakespeare under the shadow of World War II; the title and bulk of the play belongs to his dresser Norman (Reece Shearsmith).

The lights drop and the wartime songs fade, and an explosion of sound plunges us into the Blitz, 1941, and that night’s performance of King Lear. “Herr Hitler has made it very difficult for Shakespearean companies”, Sir complains, and the Blitz occasionally visits the action through a neat suggestion of light and sound. But the play goes on – there’s a smart visual gag with a nervous drummer trying to continue the storm sequence between blasts, and Ben and Max Ringham’s gently haunting score pushes the characters on further to the inevitable collapse of their insular world. 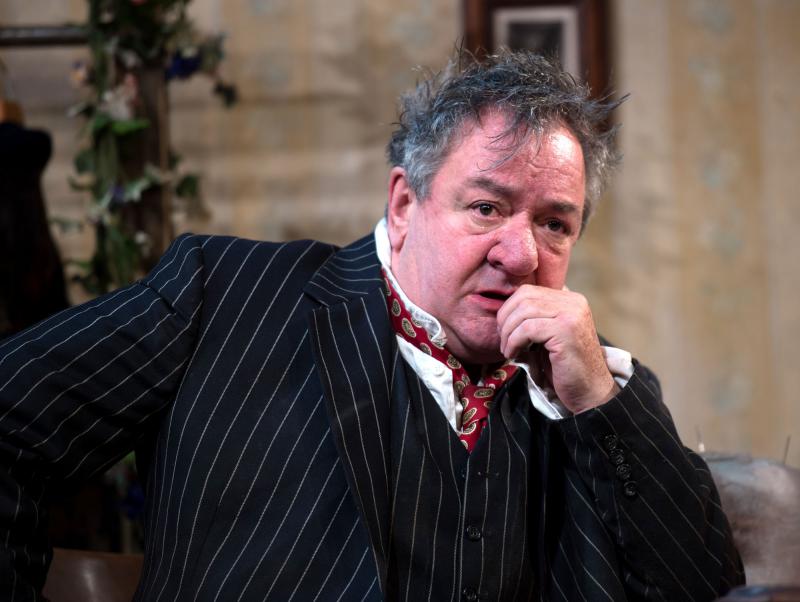 Foley’s programme essay describes the Sir/Norman relationship as a latter-day Lear and Fool, a reading vibrantly brought out in his stars’ performances. Shearsmith is a force of nature, hands constantly in flight. His delivery renders dialogue that sounds readable (often delivered in speeches, and full of anecdotal stories) into arresting comic patter, or searing criticism of any character that comes between him and his ‘Sir’. By contrast, Stott is a silent, solid presence, spending much of the first act in the absorbing act of applying his makeup. His speech feels less performative and more fresh-minted and direct. His stillness counteracts and points out Norman’s motherly fidgetiness, to its tender first-act climax of Norman lining Sir’s hands with makeup before the performance begins. There are striking performances from the supporting cast, with a remarkable shift from brittleness to poignancy in Selina Cadell’s long-suffering stage manager and comrade.

‘The Dresser’ plays as a beautifully paced backstage narrative, flirting with the chaos of Noises Off, but far more affectingly so, with every actor desperately trying to keep their leader going through the performance. What engrosses most is the minute shifts in the relationships between the company, from the young woman inviting Sir’s attention in exchange for larger roles, to the quiet delight of Thornton (Simon Rouse) making his debut as the Fool. The quiet tragedy is that these relationships are never seen eye-to-eye. In the final scene Norman deliberately reduces the story to a two-hander, sending the other characters home in quick succession. We are left with a heartrending separation of two men who will never be equals, in a world on the edge of a new order.