Review of: The Duke at the Unicorn Theatre

Outstanding one-man show about (but not limited to) the film industry, the refugee crisis and a porcelain figure of the Duke of Wellington on horseback 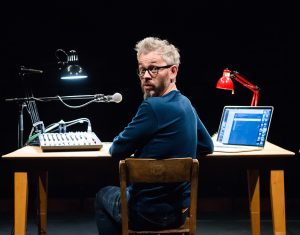 ‘The Duke’, the smash hit from this year’s Edinburgh Fringe written and performed by Shôn Dale-Jones, currently plays at the Unicorn Theatre in Southwark. Despite the venue, it’s not precisely a children’s show. Children are welcome, and the content’s certainly family-appropriate, but children are one of the key themes in a show that flies between the film industry, the value of art and currency and the hilarious thoughts of Dale-Jones’ Welsh mother. The play describes the odyssey of events that ensure after a) said mother breaks the porcelain figure of the Duke of Wellington on horseback that Dale-Jones’ late father bought in 1974, b) a film producer takes issue with almost every aspect of his beloved film script, and demands immense changes before investing, and c) a radio report plays describing the dangers experienced by child refugees. Did it all happen quite as he tells it? Who knows, and who cares? It’s a magnificent, ripping yarn, and one of (if not the) finest solo shows you’ll ever see.

But first Dale-Jones makes sure we’re sitting comfortably. Every person’s hand is shaken as they walk into the auditorium and marks the start of the performance with a conversational ‘hello’, so when he calls us a ‘warm, generous’ audience in his introduction we’re keen to prove him right. This relationship never disappears even when the performance properly begins. The house lights stay at half so he can watch and tailor the show to our response – at one point giving away the next plot point when someone visibly tenses, and pausing his introduction to chat to a girl who jumped every time he used the microphone.

He gives a fine reading of his own script, which alternates honest prose with poetic finesse: he riffs on a theme or a sentence structure, explores different terms for the same idea, calls back to earlier phrasing and jokes. The mark of an exceptional solo show is when you’re not only interested in the storyteller’s world, but desperate to spend more time in it. His characters are lightly sketched and richly entertaining – his mother in particular has a fine eye for black comedy, and his wife deserves every praising aside he gives her.

It is a one-man show in its finest sense: the set is a desk, laptop, microphone with reverb and a comfy chair that Dale-Jones never leaves throughout the show (this sits on top of the set for ‘Jason and the Argonauts’, the main show playing in the Weston space). The tech is the music from his laptop and the effects of the microphone: conversations are staged by alternately speaking into the mike, and then shouting (hence the jumping child). Music is deployed to speed the story – and our feelings – to the next stage (a towering Italian aria dawns when he realizes the depth of his filial love, and the search for the Duke is accompanied by a homemade rap). The conceit for separating voices through the microphone neatly clarifies his anecdotes and homogenizes the different conversations – meaning that Dale-Jones’ encounter with a refugee woman working as a cleaner, and her story about her missing husband, shocks us as much as him. This is key to Dale-Jones’ story: the refugee crisis, whilst bearing little impact on the main narrative, is constantly at the back of his mind, shaping his view of the world and undermining the importance of his other encounters. What does a run-in with an uncaring film producer matter when there are children suffocating in the back of vans?

Tickets to the show are free; Dale-Jones only asks that you donate to Save the Children as you leave the venue (where he waits by the door to thank you for coming). The show also runs at the Royal Court in December so you have a second chance, but go, give this man an hour of your life and he will pay you back tenfold. Bring change.