Following the success of Rodgers and Hammerstein’s Allegro at Southwark Playhouse and Titanic at Charing Cross Theatre, Artistic Director Thom Sutherland revives this less well-known Broadway musical. Last seen in London at Regent’s Park Open Air Theatre four years ago, it is almost twenty years since the original production premiered in Toronto, after which it claimed 4 Tony Awards, including Best Book by Terrence McNally and Best Original Score in 1998.

Based on EL Doctorow’s 1975 novel, which follows three families in America at the turn of the 20th century. The lives of an affluent Mother and her family, a Latvian Jewish migrant, Tateh and his daughter and musician Coalhouse Walker Jr. from Harlem’s African-American community become entangled, after Mother finds Walker’s abandoned baby son alive in a shallow grave, whom she takes in alongside his mother, Sarah and meets Tateh many years later.

Starring Earl Carpenter as Father, Anita Louise Combe as the matriarch of the affluent New Rochelle family and Gary Tushaw as Tateh, previously seen as Joseph Taylor Jr in Sutherland’s Allegro. Ako Mitchell also joins the cast as Coalhouse Walker with Jennifer Saayeng as his partner Sarah, who delivers a powerful vocal performance in “Your Daddy’s Son”. Joanna Hickman is comic cello-playing vaudeville actress Evelyn Nesbitt and Seyi Omooba makes her professional debut as Sarah’s friend, leading the case in gospel-inspired “Till We Reach That Day”. 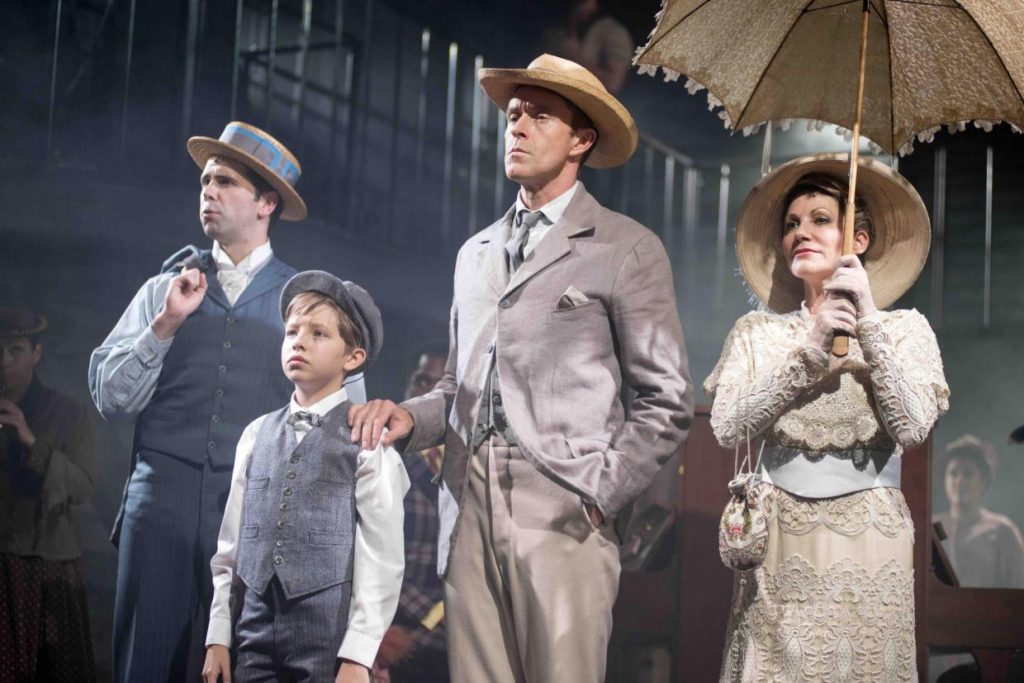 With music by Stephen Flaherty and lyrics by Lynn Ahrens, Mark Aspinall’s re-orchestration of this two-act production is driven by a large cast of 24 actor-musicians, half of which also play their own instruments, creating an on stage orchestra led by Musical Director Jordan Li-Smith.

Tom Rogers and Toots Butcher’s well-crafted wooden set is brought to life by lighting designer Howard Hudson and assisted by two moving pianos; on which the cast sit, stand and climb over to aid scene changes. Indeed, Southerland’s staging does attempt to overcome the structural challenges of the small Charing Cross Theatre, however, the indulgence of musical instruments results in the 24-strong cast occasionally overflowing into the auditorium.

In company with these spatial constraints, the theatre’s position underneath a railway line means that the audience are occasionally subjected to the grumbling sounds of passing trains. Yet, more noticeable are the sweltering and airless conditions, impelling audience members to cool themselves by using their programmes as paper fans.