Review of: Oil at the Almeida Theatre

An ambitious saga, covering the impact of fossil fuel through the last 130 years and into the future. At its heart this is a study of the struggles of a single mother through the ages and the complexities of the mother-daughter relationship. A script that has tremendous wit, a great set and brilliant cast means that, under Carrie Cracknell's direction, Elle Hickson's Oil succeeds on all levels.

Theatre is at its best when an ambitious project comes off. There is no doubt that Ella Hickson’s Oil at the Almeida Theatre is ambitious, reaching across two centuries and five different environments, and the good news is that the Almeida has once again delivered a compelling and thought-provoking production that is original and superbly executed by director Carrie Cracknell.

The drama takes us from impoverished Cornwall in the 1880’s, through Iraq in 1908, Hampstead in the 1970s, back to the Middle East in the near future and finally full circle to the same farm in Cornwall in the distant future. Ostensibly the binding factor for all of this is oil, with the farmers tempted by a high price to sell their land for kerosene storage, followed by the British exploitation of the resource in Iraq, the Libyans reclaiming their birth right, the next Gulf war and ultimately a reliance on a new fuel source after all endeavour has been made redundant. However, at its heart this play is about the changing position of women in our society and the nature of the evolution of a mother-daughter relationship. We follow the 5 ages of May (Anne-Marie Duff) stretched across two centuries, firstly as a disempowered pregnant farmer’s wife who has to escape, then as a young mother struggling to make a living and avoid the attentions of predatory and pathetic men, moving to a high powered business woman with an unruly teenager, a career politician with a moralistic daughter ( Yolanda Kettle) trying to right the wrongs of western involvement in the Middle East, and ultimately the old lady relying on her middle-aged daughter for company and solace. 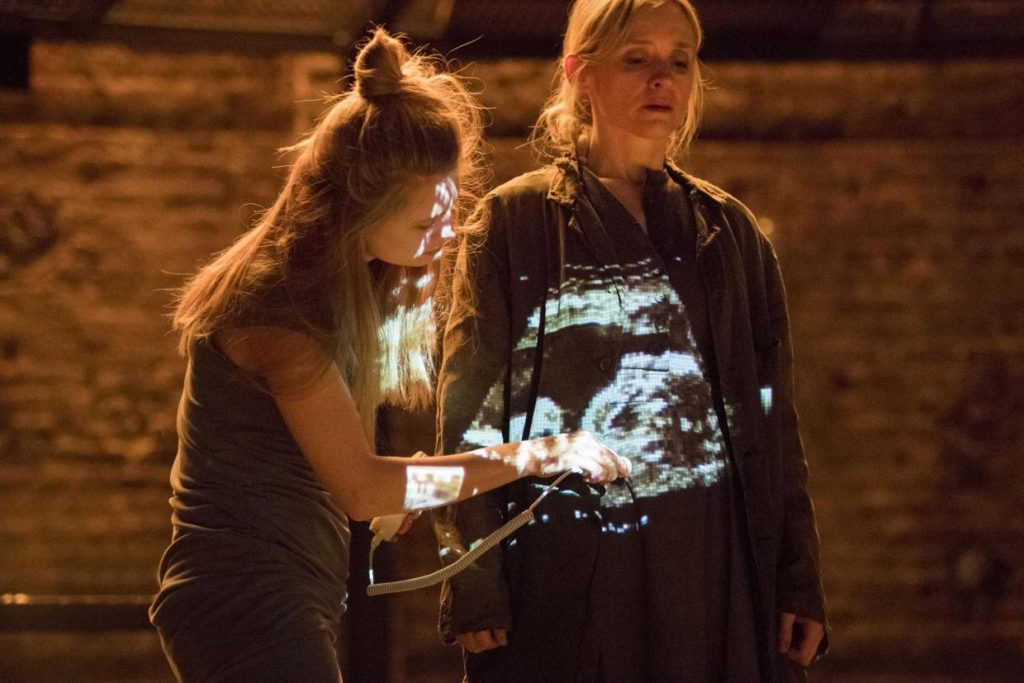 For many this may all seem too much to fit into an average length play, with so many issues raised, regarding our dependence on fossil fuel and the extent to which the fight for this resource has been the cause of so many of the ills in our society, together with the difficulties of being a single mother, which have not got any easier over time. However, this works here for a number of reasons. First and foremost, the play is driven by a dialogue that crackles with wit and pathos, such that we are eager to catch every line. The scene in which May dismisses the qualities of daughter Amy’s teenage boyfriend Nate (Sam Swann), is worthy of note-taking by frustrated parents. Secondly, the set is a triumph. The passage through time is helped by poignant photos images and the set evolution is seem-less. The dream sequence, in which the nineteenth century farmer-husband returns to the late twentieth century only to slip from May’s grasp is so well done that I wont give it a spoiler here. The use of music is also very effective and Sam Swann has a fine voice. Finally, there is the strength of the acting. Anne Marie Duff is exceptional as May, capturing all of the qualities of a mother that will do everything to project her daughter at every point in her life, and Yolande Kettle brilliantly plays Amy making us barely aware that the same person is playing the idealistic adult and the young girl.

This is a play that will undoubtedly stay with you for some time. I implore you to try to get a ticket, and if you have a daughter – take her too.